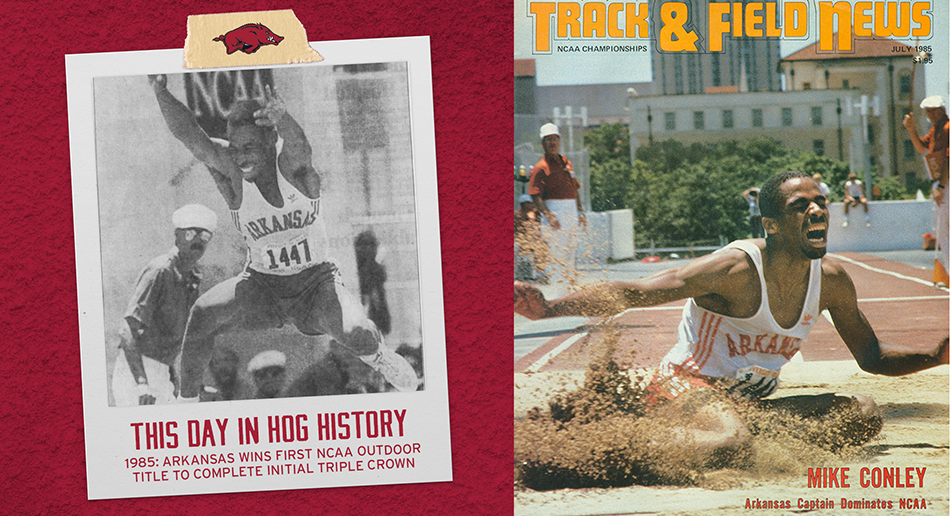 The Razorbacks claimed their first NCAA Outdoor team championship on this day in 1985 in Austin, Texas, and completed Arkansas’ first triple crown of national titles. Labeled by some as the strongest collegiate team ever assembled, the Razorbacks lived up to its billing.

Arkansas totaled 61 points in the victory with Washington State runner-up at 46, for the second consecutive year, followed by Baylor (37), Iowa State (35) and BYU (28).

During the 1984 cross country season, the Razorbacks achieved its first national championship by 10 points (101-111) over Arizona as Tennessee (144), Wisconsin (159) and Virginia (190) followed in the meet hosted by Penn State.

Arkansas dominated the NCAA Indoor held in Syracuse, New York, totaling 70 points to easily finish ahead of Tennessee (29), Baylor (25), SMU (23) and Georgetown (20). It marked the second indoor NCAA title for the Razorbacks, having claimed the 1984 championship by 10 points over Washington State, 38-28.

For the 1985 NCAA Outdoor Championships, the current scoring system of eight places was introduced. In the previous three seasons, the meet had been scored to 12 places.

With points at a premium, athletes who could score in more than one event were essential to team titles hopes.

Mike Conley led the Razorback effort with 28.75 points in the meet, sweeping the long jump and triple jump while placing second in the 200 meters and running on a sixth-place 4×100 relay.

Washington State, meanwhile, countered with scoring potential from Peter Koech, who totaled 26 points in the 1985 NCAA meet with a victory in the 3,000m steeplechase while placing second in the 5,000m and 10,000m.

Following are excerpts of articles, including some headlines, on the Razorbacks 1985 NCAA Outdoor championship and triple crown accomplishment from Bert Rosenthal, Associated Press; Randy Riggs, Austin American-Statesman; and Dick Moore, Fort Worth Star-Telegram.

John McDonnell, Arkansas’ track and field coach, didn’t think any collegiate team would be able to accomplish what Texas-El Paso did – sweep the NCAA cross country, indoor and outdoor championships in the same season.

The Razorbacks, in completing a sweep of the 1984-85 national collegiate track titles, amassed 61 points from nine events during the weeklong meet at the University of Texas, winning the NCAA Outdoor Championships for the first time in the meet’s 64-year history.

“It was just like a dream. All that has happened doesn’t seem real,” said McDonnell, who took the traditional victory dunking in the steeplechase water pit. “A coach hopes to win three national championships in a lifetime. To win three in one year is, well, phenomenal.”

Arkansas, led by the outstanding senior, Mike Conley, and the brilliant freshman, Roddie Haley, finished with 61 points, far ahead of Washington State, the runner-up with 46, and Baylor, third with 37.

Southwest Conference schools filled five of the top 12 places in the team standings. In addition to Arkansas and Baylor, Houston tied for seventh with 26 points while Texas and SMU were tied among four teams for ninth with 25.

Only two other schools – Kansas and Villanova – ever have won all three meets.

Winning the outdoor title for Arkansas was not as easy as winning the indoor crown, in which the Razorbacks beat runner-up Tennessee by 41 points.

The Hogs accomplished their sweep despite several bad breaks on Wednesday’s first day of qualifying.

“After the first day (of qualifying Wednesday), I had a sinking feeling,” said McDonnell. “All that could go wrong did. It turned around for us Thursday. We qualified just about everyone. It was a very good day for us. It could not have gone better.

“We had a team meeting this morning. One of the newspapers here said we were stumbling (after five potential qualifiers failed to make it into their finals on Wednesday). I just wanted our guys to know the people who we were counting on for points were still in the meet.

“We never have given in and we weren’t about to do it now. We came back. That’s our trademark.”

Conley, with a remarkable triple jump victory, and freshman sensation Haley, with a sizzling triumph in the 400 meters, led Arkansas to its first men’s title in the NCAA Outdoor Championships.

Conley, responding to an unexpected challenge, established a great deal of track and field history by winning the triple jump.

The Olympic silver medalist was jumping in a new pair of silver shoes – Conley does it as a reminder of his performance in the 1984 Los Angeles Games – won with a sensational wind-aided jump of 58 feet, 1 ¾ inches into a strong crosswind and headwind and in extreme heat at Memorial Stadium.

The victory completed a long jump and triple jump double for the Razorbacks’ captain – the second straight year he has won both horizontal jumps in the Outdoor Championships. No other athlete has accomplished that feat.

Conley also has won both horizontal jumps in the NCAA Indoor Championships each of the past two years – another unprecedented feat.

Haley, the blazing fast 19-year-old from Texarkana, Texas, sped to victory over a star-studded contingent in the 400 in 44.70, the second-fastest time in the world this year.

“I really wanted to win to give our team a boost,” said Haley.

Haley, who owns the fastest 1985 clocking of 44.67 from winning the SWC title, beat a field that included Nigeria’s Sunday Uti of Iowa State, the World University Games champion; Olympic silver medalist Gabriel Tiacoh of the Ivory Coast and Washington State; Michael Franks of Southern Illinois, the silver medalist in the 1983 World Championships; and Willie Caldwell of Baylor, owner of the world indoor best in the 500m.

“It was amazing for a freshman to win against that kind of competition. It was a great field,” said McDonnell, “with an Olympic silver medalist (Tiacoh), the indoor champion (Franks) and a member of an Olympic bronze medal relay team (Uti).

“He’s tremendous. Roddie respected them all but wasn’t afraid of any of them.”

Also scoring for the Razorbacks were Paul Donovan, third in the 1,500; Bill Jasinski, third in the high jump; and Marty Kobza, fourth in the shot put.

Arkansas’ other points came Friday as Conley won the long jump and John Register was sixth, Conley finished second in the 200, and the 400-meter relay team, with Conley, was sixth. The relay also included Fred Cleary, Haley and Michael Davis.

Jasinski supplied Arkansas six additional points with a career-best leap of 7-6, improving upon the 7-5 ½ school record mark he cleared to win the SWC title.

“It was not a cheap win,” said McDonnell. “Points were hard to come by. When Bill Jasinski has to high jump 7-6 just to get six points, that’s amazing.”

Lamar’s Thomas Eriksson and Alabama’s Thomas McCants both cleared 7-7 ¼ to tie the collegiate and meet record. Eriksson won on fewer misses, needing two attempts at the winning height to three for McCants.

Jansinki held the lead at 7-5, clearing on his second attempt while three attempts were required by Eriksson and McCants. With the bar at 7-6, Jansinski made the career best height on his first attempt. McCants cleared on his second try while Eriksson, again, needed three jumps at the bar.

When Arkansas won the cross country national title in the fall, Donovan placed 23rd and was the second Razorback in the 10k race behind David Swain, who finished 14th.

Conley’s winning triple jump of 58-1 ¾, aided by a wind of 3.2 meters per second with the allowable for record purposes is two meters per second, was the third-best ever under any conditions.

Only world record holder Joao de Oliveira of Brazil, with a leap of 58-8 ½ in the high altitude of Mexico City during the 1975 Pan American Games, and Keith Conner of Britain, with a wind-aided 58-5 ¼ in the 1982 Commonwealth Games at Brisbane, Australia, have jumped farther than Conley.

Conley’s winning jump was the only one of his five measured jumps that was wind-aided. It came on his fifth attempt in the final.

On his fourth jump, immediately after freshman John Tillman of Tennessee had taken the lead with a personal-best of 55-7, Conley soared 57-6 ½, one inch short of the American record held by Willie Banks, making him the sixth-best performer in triple jump history.

After that jump, on which the wind was 1.5 meters per second, the elated Conley leaped over some flags near the triple jump area, ran over to the stands and bear-hugged Ted King, the jump coach at Arkansas.

Afterward, Conley said he thought that jump was about 57-9 – a distance that would have broken Banks’ American record of 57-7 ½ – but he had reached back with a hand when he landed, and it was from that point that the jump was measured.

Conley said that at the beginning of the competition he was “tired … fatigued … and lacked motivation.”

That condition came from the arduous schedule he had in this meet. Wednesday, he had qualified for finals in the long jump, the 200-meter dash and the 400-meter relay. Thursday, he had triple jump qualifying, and Friday, he won the long jump, finished second in the 200 and helped Arkansas place sixth in the relay.

Conley equaled his meet record in the long jump with a 27-2 leap. In the 200m, he sped to a windy 20.12 silver medal performance behind a 20.03 from Houston’s Kirk Baptiste, the defending champion.

During his first three triple jumps, Conley said he was having trouble, because “the runway was too short.”

“I had to cut my run by two steps, and I was reaching at the (takeoff) board,” he explained. “I couldn’t hop (properly).”

Then, after the first flight, “I went outside (the stadium) and did a series of hurdle jumps,” Conley said.

After that, he said, he felt much better.

And when Tillman grabbed the lead, Conley said, “It was like a slap in the face. It made me wake up. I realized I would have to jump far to win.”

He added that when he took off from the board on the 57-6 ½ jump, “It felt good. I had a good feeling. I was a little off balance and couldn’t control myself. When I hit the sand, I knew it was a good jump.”

On the winning jump, Conley said, “It felt great to go over 58 feet, even with an aiding wind. I couldn’t believe it was that far. It didn’t feel as good as the 57-6 ½. I guess the wind was helping me.”

Following those two tremendous jumps, Conley said he had no intention of passing his final attempt.

“I had things going good and I didn’t want to mess it up,” he said. “I was having a good day and I wanted to take advantage of it.”