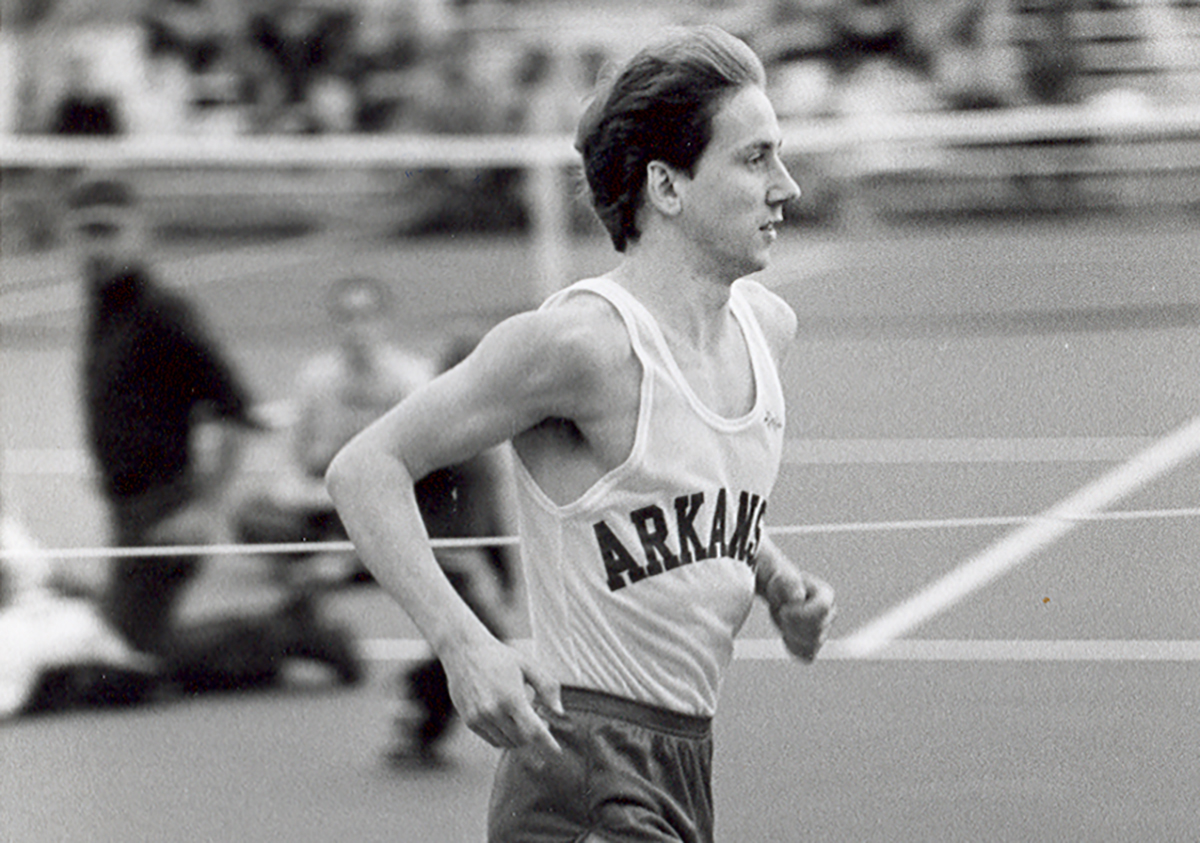 A dominant Razorback team displayed its prowess during the 1985 Penn Relays, winning six titles on the final day of the meet, April 27, to reach an amazing total of eight event victories on a spectacular weekend for Arkansas track and field.

The magnitude of the weekend was summed up by Razorback coach John McDonnell in an UPI article.

“It’s been a great meet,” McDonnell said. “It’s hard to believe it’s the Penn Relays where we’re doing it. We have a tremendous team atmosphere. Guys are running times they have no business running.”

The Razorbacks’ 4×1500 team of Keith Iovine, Gary Taylor, David Swain and Paul Donovan led off that Saturday with a collegiate record of 14:50.2, breaking Villanova’s mark of 14:52.81 set the previous year.

Donovan noted: “I was concerned because Abdi is faster than me. I was just praying to finish before he got me.”

It marked the first time in the history of the meet for the Razorbacks to win Championship of America titles in either sprint relay. Running on both winning efforts were the quartet of Fred Cleary, Haley, Mike Conley and Wallace Spearmon.

In addition, Arkansas won four of eight field events contested, even without Conley competing in the long and triple jump. Marty Kobza picked up a pair of titles in sweeping the shot put and discus with marks of 62-7 ½ and 192-3.

Bill Jansenski bettered the meet record in the high jump by a quarter of an inch with a 7-5 ¼ clearance as he claimed the first of two titles, winning again in 1986. Jansenski remained the Penn Relays record holder until 1995 when Razorback Ray Doakes cleared 7-5 ¾ for the victory.

Following are excerpts from two articles, by Ron Reid from the Philadelphia Inquirer and Frank Litsky of the New York Times.

For more than a quarter-century, Villanova men have dominated the Penn Relays. No more, not as long as Arkansas keeps outrunning the Wildcats from Philadelphia’s Main Line.

Since 1983, Arkansas has been a force in this five-day track and field carnival, the largest in the world.

Shooting down a 40-year precedent with a performance suited to their nickname, the Arkansas Razorbacks hoggishly dominated the 91st Penn Relays Carnival at Franklin Field.

Adding three Championship of America relay titles to the distance medley crown they won Friday, the Razorbacks became the first team other than Villanova to take four Penn Relays titles since Michigan did it in 1945.

Were that not enough, the Razorbacks savaged their competition for three field event wins and saw Frank O’Mara, an alumnus of the Fayetteville school, ironically capture the Jumbo Elliott mile in 3:58.0.

But no individual event could deliver the thrills or exhibit the strength that the Razorbacks generated on their way to victories in the 6,000-, 400-, and 800-meter relays. And Arkansas’ Roddie Haley, a member of the champion 400-, 800- and distance medley teams, was named best performer of the Relays, in which 28 records were broken.

“Before this year started,” said Arkansas’ Mike Conley, an Olympic silver medalist in the triple jump, “I said this would be the best track and field team ever assembled. And we proved it out there today.”

Indeed, Conley’s claim was hardly an idle boast as the Razorbacks rampaged through the hot afternoon with some running that was marvelous to see.

The Razorbacks socked it to the rest of the field from the start, rollicking their way to a record-smashing victory in the 6,000-meter relay, the first Championship of America race on yesterday’s card.

Arkansas captured the 6,000-meter relay with a team of Keith Iovine of Metairie, La.; Gary Taylor and David Swain of England and Paul Donovan of Ireland. They finished almost 150 meters ahead of George Mason, the team that chased the Hogs to the tape in Friday’s distance medley showdown which was won by Arkansas in 9:28.2 over a 9:28.9 for the Patriots.

And it might have been just another Razorback triumph, rather than a meet record of 14:50.2, but for Donovan’s keen eyesight.

“With a lap to go,” he said after the race, “I looked at the clock, and it said 13:52. Since we were that close, I thought I might as well go for the record. The crowd was yelling and screaming and it spurred me on.”

Donovan did just that, turning his 1,500-meter leg in 3:41.2, despite the absence of competition. He waved the baton triumphantly above his head as he crossed the finish line. His message was clear. Arkansas indeed had arrived.

The Razorbacks’ record run broke the old meet standard of 14:52.81, set a year ago by Villanova, the team that seemed to pay the dearest price for every Arkansas success.

Right after the 6,000-meter relay, for example, someone asked Swain, a Londoner, if Arkansas had now become the U.S. mecca for English and Irish runners, a role Villanova long has held in track and field.

“Yes, no question,” said Swain. “I think Villanova has lost its prowess as a track powerhouse. There are a lot of other places trying harder, not resting on their laurels.”

It was just about an hour later when Arkansas whipped some lesser talents again, this time in the 400-meter relay – starring Conley, the Razorbacks effervescent Olympian and a man who had never been happier in his work.

While Conley is a two-time champion in the NCAA triple jump, he happily left off his specialty at Penn for the joy of running the third leg of each of the Razorbacks’ sprint relays. Those teams included Fred Cleary and Haley, with Wallace Spearmon as the anchor.

“I think this meet is called the Penn Relays for a reason,” said Conley, “and I wanted to get involved in that reason.”

Get involved he did. Despite handoffs in the 400-meter relay that he later described as terrible – ripping his own work most of all – Conley pulled the Razorbacks from fourth place to first with a sizzling third leg that led to a winning mark of 39.89.

“The handoffs were terrible, terrible,” Conley said. “I looked at Wallace’s hand about four times, but I couldn’t put the baton in it. I really get nervous at this meet, even more than at the Olympics. … This is the best track meet in my college career.”

It got even better for Conley and his mates when the foursome teamed up for an assault over 800 meters and finished ahead of Auburn in 1:20.9 – another meet record. The old mark of 1:21.39 was set by North Carolina State in 1983.

In the individual events, the Razorbacks’ Marty Kobza added the shot put title to the discus crown (192-3) he won Friday. Kobza had a winning heave of 62 feet, 7 ½ inches.

Two of his teammates also succeeded afield. Mark Klee took the pole vault with a 17-0 jump while Bill Jansenski won the high jump at 7-5 ¼, a Penn Relays record, to defeat Darren Burton of Nebraska on fewer misses.