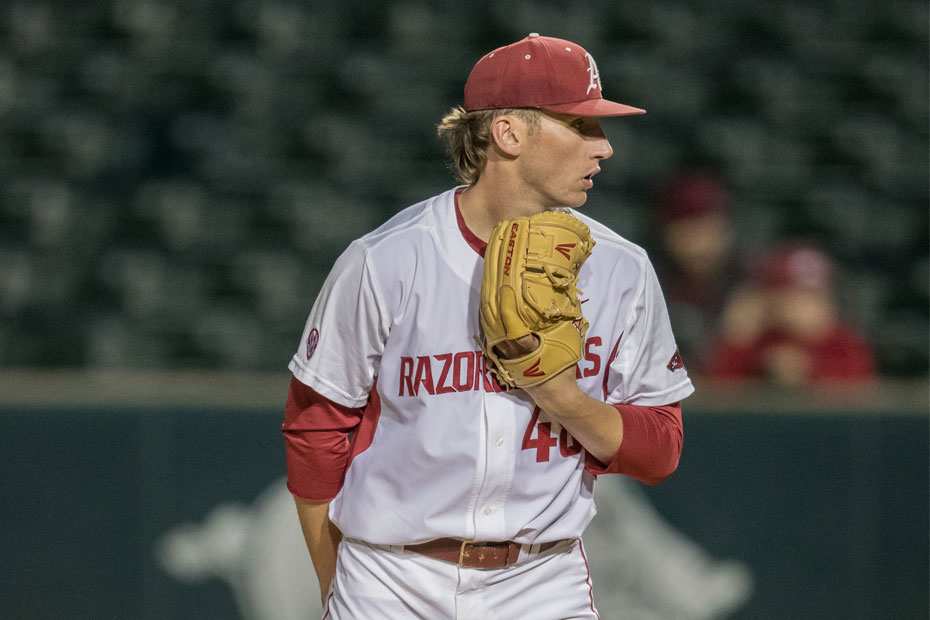 FAYETTEVILLE, Ark. – Outfielder Luke Bonfield hit a walk-off single in the bottom of the ninth inning Friday night at Baum Stadium to give Arkansas the 3-2 victory and the double-header sweep over Rhode Island. The hit followed a masterful performance by starting pitcher Trevor Stephan, who had a perfect game into the seventh inning and finished with a career-high 13 strikeouts.

The Razorbacks won game one earlier in the day, 5-2, getting help from another strong pitching performance from Barrett Loseke, who threw four innings out of the bullpen, giving up no runs and scattering three hits to earn his second victory of the year.

Arkansas moves to 12-3 on the year and remains a perfect 10-0 at home. Rhode Island falls to 5-8 with the two losses on Friday.

Arkansas struggled to warm up the bats in the first game against the Rams. Only Dominic Fletcher’s solo home run in the second provided runs for either side until the fourth inning. For Fletcher, the centerfielder now has four home runs this year, which is one off the team lead.

In the fourth inning, Rhode Island scored twice off starter Blaine Knight on two RBI doubles. Knight wasn’t as sharp as his previous outing, but still managed to throw 4.1 innings, giving up the two earned runs on six hits, while striking out four.

In the middle of the fifth, head coach Dave Van Horn decided to go to the bullpen and bring in Loseke. The sophomore carried the load for the rest of the game, allowing just three base runners and giving the Hog offense time to make a comeback.

In his last two outings, Loseke has earned wins both times after coming out of the bullpen. Last week against Louisiana Tech, the sophomore allowed no runs on one hit through four innings and struck out seven. He has slowly become one of Arkansas’ top options in relief as he has a 2.25 ERA and is holding opposing hitters to a .185 batting average.

As an offense in game one, Arkansas drew nine walks, which ended up being the difference. The tying run was scored on a bases loaded walk in the fourth to Jordan McFarland. Later in the sixth, the Hogs scored twice after one out walks to McFarland and Jaxon Williams. McFarland later scored on a wild pitch and then Jake Arledge followed with an RBI single.

Bonfield provided the insurance run in the seventh inning with a solo home run into the Hog Pen to make it 5-2. For Bonfield it was his second home run of the year and his only hit in the game.

In game two, Stephan was in the midst of one of the best outings by a Razorback pitcher in 10 years. The junior retired the first 19 batters he faced, going perfect into the seventh inning and had already recorded nine strikeouts, matching his career-high, which he set in the previous week.

Rhode Island broke up the perfect game in the seventh inning after a fielding error at second base allowed the first baserunner of the game. The next batter singled into right field to break up the no-hitter. Stephan continued to pitch and made it scoreless through the seventh and eighth innings, and continued into the ninth to try for the complete game.

After striking out the first batter of the ninth, Stephan had racked up 13 strikeouts, which is the most by a Razorback pitcher since Jess Todd set down 17 against South Carolina on May 24, 2007 in the SEC Tournament.

The Razorbacks caught the error bug in the ninth, committing two in consecutive at-bats, allowing two runs to score and tie the game. Carson Shaddy, who committed the error earlier in the seventh, suffered another error in the ninth to put two runners on. In the next at-bat, Jax Biggers made an error on a slow grounder to load the bases. Rhode Island tied the game on a two out, two RBI single after Arkansas went to the bullpen to relieve Stephan.

Nonetheless, the Hogs were able to construct a perfect inning at the plate in the bottom of the ninth to score the winning run. Hunter Wilson led off with an infield single deep at short, his third hit of the game. Arledge followed with a perfectly place sacrifice bunt down the first base side. After Chad Spanberger followed with a groundout to the right side to move Wilson to third, Bonfield delivered the winning hit into left field.

Bonfield finished game two with two hits and the lone RBI. Wilson led all hitters for the first time this season, going a perfect 3-for-3 at the plate, his first multi-hit game of the year.

Up Next
Due to threatening weather on Saturday, the Razorbacks and Rams will not finish their three-game series until Sunday at 1 p.m. Saturday’s originally scheduled game two was played Friday night as part of a double-header. Sunday’s game three will still be televised online on SEC Network+ and can be heard on the radio on the Razorback Sports Network.