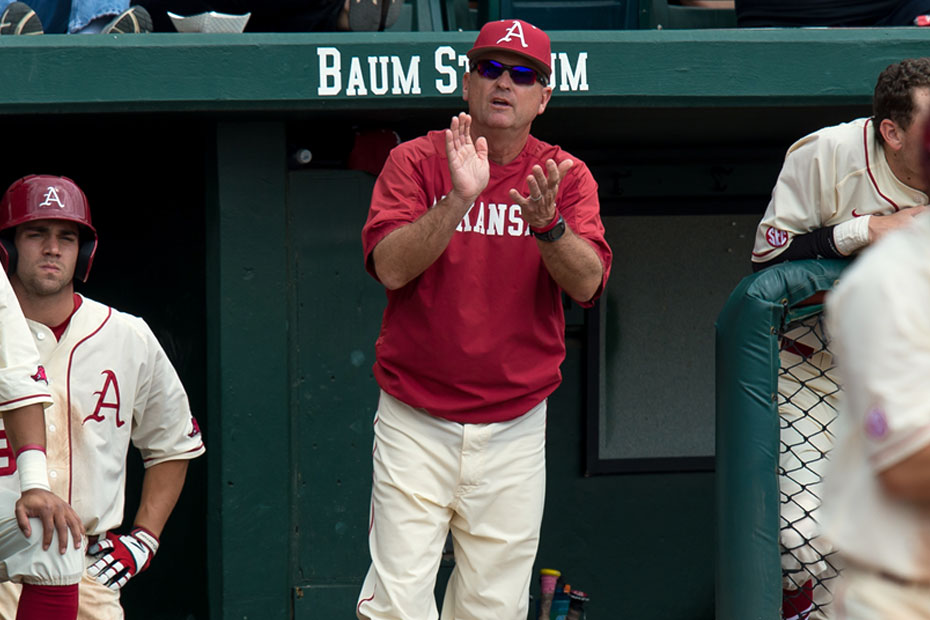 The five Class of 2016 signees come from both the northwest and central parts of the state. They will be able to compete for the Razorbacks in the 2017 baseball season.

“Our No. 1 goal is to get the best players in the state of Arkansas,” said head coach Dave Van Horn. “I feel really good about the 2016 in-state players that we are signing.”

The state of Arkansas continues to produce homegrown talent for the Razorbacks as 13 players on the 2016 baseball roster call the Natural State home, including projected starters Carson Shaddy and Alex Gosser. Eight Arkansas natives from last year’s class are also expected to make their debut in the cardinal and white this spring.

“We did a really good job of covering every position with this signing class. It’s probably as good of a class that I have ever been associated with,” Van Horn said.

The signing class includes the top two left-handed pitchers (Evan Lee and Dylan Thompson) in the state, according to Perfect Game.

Angus Denton | RHP | R/R | 5-11 | 155 | Beebe, Ark. | Beebe HS
Ranked No. 14 overall and the No. 3 right-handed pitcher in the state of Arkansas by Perfect Game … The No. 8 prospect and No. 4 pitcher in Arkansas according to Prep Baseball Report … Struck out 96 batters in 51.0 innings and posted a 0.41 ERA in 2015 … Went 6-2 with one save last year … Played summer ball for Diamonds Baseball Club … Pitched seven scoreless innings for Diamonds Baseball Club at the prestigious East Cobb Invitational in 2015 … Plays for head coach Mark Crafton at Beebe High School.

Harrison Heffley | LHP | L/L | 6-2 | 175 | Rogers, Ark. | Rogers HS
Has a 2.84 ERA for his career and struck out 42 batters in 30.0 innings pitched as a junior … Pitched a one-hitter in his first varsity start against Siloam Springs HS in 2015 … Played American Legion ball over the summer … Is an AP scholar and member of the National Honors Society … Also competes in basketball and golf … Plays for head coach Matt Melson at Rogers High School.

Zach Jackson | RHP | R/R | 6-1 | 220 | Bryant, Ark. | Bryant HS
Named the fifth best player and No. 2 pitcher in the state of Arkansas by Prep Baseball Report … Ranked as the No. 372 overall prospect and No. 141 pitcher in the nation by Prep Baseball Report … Is the fourth best right-handed pitcher and No. 18 overall prospect in the state according to Perfect Game … Came back from an injury and tossed seven scoreless innings with nine strikeouts as a junior in 2015 … High school teammates with freshman pitcher Blaine Knight and fellow signee Zach Jackson … Plays for head coach Kirk Bock at Bryant High School.

Evan Lee | OF/LHP | L/L | 6-1 | 190 | Bryant, Ark. | Bryant HS
Ranked the No. 1 overall prospect in the state of Arkansas by Prep Baseball Report … Is the No. 124 player overall and the No. 19 pitcher in the nation according to Prep Baseball Report … Listed as the No. 347 player nationally and the 39th best left-handed pitcher in the nation by Perfect Game … Named the top left-handed pitcher in the state of Arkansas and third best player in the Natural State by Perfect Game … Struck out 39 batters in 32.2 innings pitched with a 1.29 ERA as a junior in 2015 … Also hit .298 with 16 runs scored, 14 RBIs and 12 stolen bases … Threw a complete game no hitter against Russellville HS … Played summer ball for the Bryant Black Sox … High school teammates with freshman pitcher Blaine Knight and fellow signee Zach Jackson … Plays for head coach Kirk Bock at Bryant High School.

Dylan Thompson | LHP | L/L | 6-3 | 175 | Little Rock, Ark. | Catholic HS
Garnered a top 500 overall national ranking and No. 54 left-handed pitcher in the country according to Perfect Game … Named the second best left-hander and fourth best overall player in the state of Arkansas by both Perfect Game and Prep Baseball Report… Ranked the No. 179 overall player and No. 31 pitcher in the nation by Prep Baseball Report … Threw 64.0 innings and posted a 2.19 ERA in 2015 … Struck out 75 batters and walked just 22 … Named all-conference and to the 7A all-tournament team last year … Earned 7A all-state honors in 2014 … Played summer ball for Midwest Elite … Plays for head coach Dustin Strube at Little Rock Catholic.

The #OmaHogs will begin their 2016 season on Feb. 19 at Baum Stadium against Central Michigan. Season tickets for the 2016 baseball season are now on sale. Please visit ArkansasRazorbacks.com or call 1-800-982-HOGS for more details.