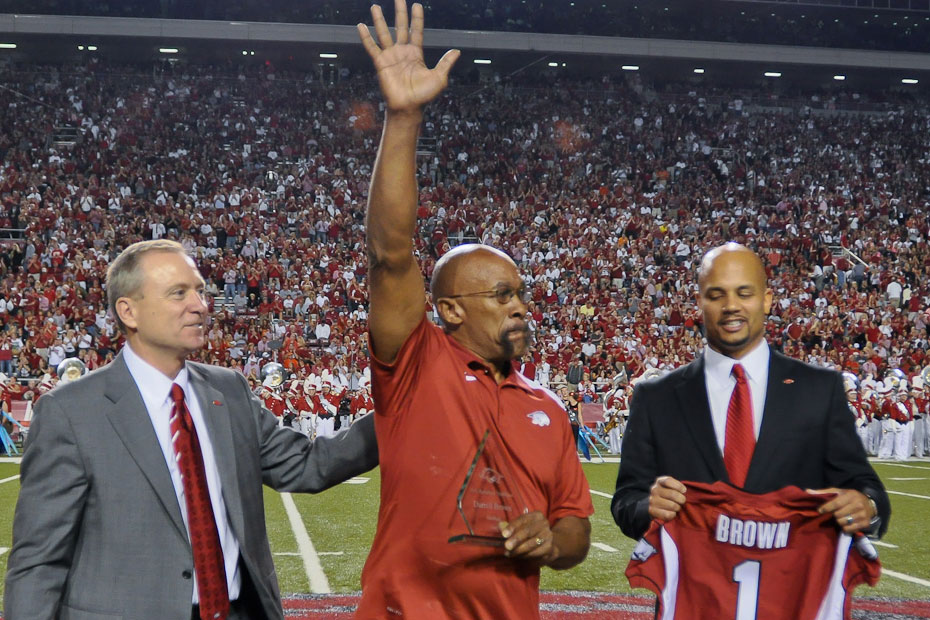 FAYETTEVILLE – Darrell Brown, the first African-American to join the University of Arkansas football team, passed away on Saturday in Little Rock. The native of Horatio, Ark., joined the team as a walk-on in 1965 helping pave the way for many Razorbacks to come.

“We are saddened by the passing of a truly extraordinary Razorback,” Vice Chancellor and Director of Athletics Jeff Long said. “Darrell helped redefine our program enabling countless opportunities for thousands of African-American student-athletes at the University of Arkansas. We were privileged to honor him in 2011 for his meaningful contributions to our program. Our thoughts and prayers are with his family, friends and all those who were positively impacted by the remarkable life of Darrell Brown.”

Brown was honored for his contributions to the University of Arkansas in 2011 as part of the Razorback Trailblazers series. The following was a feature written as part of that celebration.

Athletics has often been a catalyst for social change whether it was Jackie Robinson breaking into Major League Baseball with the Brooklyn Dodgers or Billie Jean King changing the landscape for all female athletes by participating in the famed Battle of the Sexes tennis match against Bobby Riggs.

Today Razorback Athletics looks remarkably different than it did a half century ago. With a diversified group of more than 460 student-athletes competing in 19 sports and representing the University of Arkansas, the program has made measurable progress. It is a feat only made possible by those young men and women whose courage and determination helped pave the way for progress. Even for those who didn’t go on to earn All-America or all conference status in their given sport, their courageous legacy of success continues to shape the Razorback program.

Darrell Brown never imagined the day would come. More than 45 years after he first stepped foot on the University of Arkansas campus, thousands of Razorback fans rose to their feet to cheer as he stood at midfield during halftime of the 2011 Arkansas-Auburn football game at Donald W. Reynolds Razorback Stadium. Standing alongside his children and grandson, Brown was presented a Razorback Football No. 1 jersey and a trophy as the public address announcer read off his accolades.

Numerous presentations are made each season to former Razorback football stars, but what made this particular recognition unique was the fact that Brown was never an All-American, an all-conference selection or even a starter for the Razorbacks. In fact, he never played a down in a varsity game. However, what Brown accomplished in his short tenure with the Razorbacks, helped change the face of Razorback Football and the University of Arkansas forever.

When Brown arrived in the fall of 1965, he wasn’t focused on carving out his place in history. The first African-American student-athlete to join the football team at the University of Arkansas, Brown had a much more modest goal in mind.

Growing up in Horatio, a town in Southwest Arkansas, Brown never had the opportunity to compete in organized athletics while attending Sevier County High School. During his senior year at the segregated school, the state announced that the following year Horatio High School would be integrated for the first time.

Brown begged his mother to let him return to high school one more year so he could participate in sports, but Snowie Brown, a long-time educator, would have nothing of it. It was time to get a college degree. Although he was moving on in his education, Brown turned the disappointment of losing one athletic opportunity into another one and ultimately a plethora of opportunities for others down the road.

“That frustration of not being able to go to the white school, which was going to be integrated the year after I graduated, prompted me to think if I am going to go to the University of Arkansas, I am going to play football,” Brown says. “That is what I wanted to do. I never had a chance to play organized football and this was my chance. When they admitted me to the University of Arkansas, I said ‘I can do exactly what I wanted to do in high school, but in college.’”

Brown arrived on a campus facing issues of the times, including the integration of the overall student body, but Brown didn’t let any of those outside influences deter him from his primary mission.

“I just went down to the field house and said, ‘I’m Darrell Brown and I want to play football,’” Brown says. “Obviously I didn’t get a standing ovation at that time, but they said okay. I don’t know what went on behind the scenes, but they said okay and issued me equipment.”

A tailback and a cornerback, Brown joined the Shoats squad, a team of younger players that would practice against the varsity squad in a part of practice called “fourth quarter.” Brown lined up across the line from several notable Razorback legends, including College Football Hall of Famer Ronnie Caveness.

Brown’s biggest challenges, however, came as a result of the treatment he received from some due to his race. Subjected to ridicule, mental and even physical punishment, Brown persevered to play the game he loved. Some of his teammates did what they could to help him face those obstacles, offering much needed encouragement along the way. Brown is quick to credit a number of teammates, including David Hargis, Bruce Maxwell and Terry Don Phillips, for their support.

Brown practiced with the Razorbacks throughout the fall and again in the spring of 1966 before suffering a significant injury. At that time, he decided to put aside his athletic aspirations to concentrate on his educational goals. Brown earned his undergraduate degree from the University of Arkansas in 1969 and then graduated from the UA Law School in 1972.

“I was a little ole country boy that had a dream,” Brown says. “I was just playing football and I didn’t understand or grasp the significance of what was going on. I just wanted to be a part of what everybody had an opportunity to do. That was just my dream. I wanted to be a Razorback and I wanted to play football.”

Brown helped pave the way for the thousands of African-American student-athletes who would soon follow. Little did he know he was also blazing a trail for his own family. Three of Darrell and Angela Brown’s children would go on to attend the University of Arkansas, including daughter Deedee Brown-Campbell, who earned All-America honors as a track and field student-athlete for the Razorbacks. Darrell Brown Jr. is a practicing attorney and Derek Brown recently completed his doctorate at the University of Arkansas.

On a warm October night in 2011, it was time for the University of Arkansas and the Razorback Nation to give again. This time, it was time to give a long overdue salute to Darrell Brown, a true Razorback trailblazer.