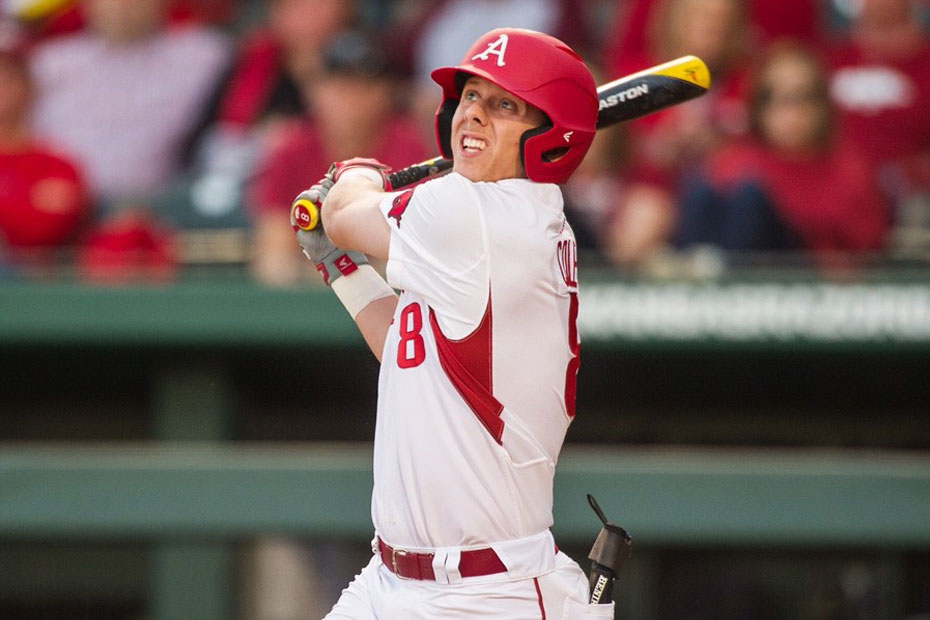 FAYETTEVILLE, Ark. – Sophomore starting pitcher Blaine Knight held the LSU lineup scoreless for six innings Friday night, and the Razorback offense did their part, as well, knocking in nine runs on 12 hits and three home runs to defeat No. 13 LSU, 9-3, at Baum Stadium.

Arkansas won its eighth conference game of the season and 25th game of the year in front of 10,741 fans. The team has yet to lose on Friday night and remains in a tie atop the Southeastern Conference’s Western Division with Auburn at an 8-2 record.

Knight set the tone with another strong start in conference play, giving up just three hits in six innings and striking out six without allowing a run. It’s the second scoreless outing for Knight this season and his first since the season opener against Miami (Ohio). In each of his four starts of SEC play, the Bryant, Arkansas native has struck out at least six batters and thrown at least six innings.

With the win, Knight moves his record for the year to 5-1 and stays undefeated in conference play (4-0). He’s one of two pitchers in the league to have won their first four conference starts this year.

At the plate, the Razorbacks slugged three homers, one each from Eric Cole, Jared Gates, and Chad Spanberger. It’s the fifth game that Arkansas has hit three or more home runs this season and 12th multi-home run game. Gates came away with the game-high hit total as he went 3-for-5 with two RBIs.

Cole was 2-for-5 with two RBIs and two runs score. He extends his hitting streak to eight games after the multi-hit performance, which is the longest current streak on the team and longest of his career.

The long ball by Spanberger was his only hit of the night, but it counted for three in the seventh inning off Blair Frederick. Spanberger now has five home runs on the season, just one shy of his total from last season.

Moments That Mattered
Arkansas scratched across the game’s first run in the second inning off LSU ace Alex Lange. Forcing Lange’s pitch count up in the early goings, the Hogs worked five walks off of him in 4.1 innings, which is a season-high for the Tiger pitcher.

Outfielder Luke Bonfield walked three times over the first four innings before finally putting a ball in play in the sixth. Arkansas walked eight times as a team in the game, which ties for the second most this year.

Cole got the only run off Lange until the fifth when he smacked an opposite field home run in the second inning to put the Hogs up 1-0. It’s Cole’s second home run in as many games and third this year.

After the long ball, Knight and Lange nearly matched each other until the fifth inning when Arkansas scored two more times with Cole, again, getting in on the action. After Carson Shaddy reached on an error, Cole doubled a 3-2 pitch into the left-centerfield gap for his second RBI of the night.

The run forced LSU to the bullpen for the first time in the game as Lange was relieved by Nick Bush. The change didn’t make much of a difference as Jax Biggers promptly doubled Cole home with a rope down the right field line to make it 3-0.

Knight didn’t give LSU any breathing room as he continued to keep the Tiger hitters at bay by not allowing a hit over his final two innings of work. Throughout his entire outing, not a single LSU batter reached third base.

The Hogs kept padding their lead in the sixth and seventh innings with Gates’ home run and Spanberger’s bomb to straight-away centerfield. By then, Arkansas had a 9-1 lead going into the eighth inning. LSU scored two more runs in the eighth, but were shut down by Barrett Loseke in the ninth, stranding three.

Razorback Quotables
“One thing we’ve been trying to do is stretch that lineup a little bit. We have a lot of confidence in the bottom three guys. They’ve progressed really well. (Jared) Gates is swinging it well and (Eric) Cole got a couple of big hits tonight. It’s just nice knowing that each and every inning we’ve got some pretty good hitters coming.” – Head coach Dave Van Horn on the production of the bottom third of his lineup

“Usually, he just throws a lot of strikes and he’s tough to score on. He’s given us a lot of opportunities. What he’s done is filled the zone up with three or four different type of pitches and pitched better the last four and five weeks than he did the first couple. I was glad we were able to get him out of there with the pitch count we did.” – Head coach Dave Van Horn on Blaine Knight

“When the competition gets better, I get better. I’m not afraid to go against any of those guys, whoever it is. It’s the bulldog mentality.” Blaine Knight on how he’s performance through the first four weeks of SEC play

“It’s huge. Last year. that was hard to come by, at times. We’ve been scoring a lot of runs early. For them to keep doing that, that’s awesome. I’m enjoying it.” – Blaine Knight on the run support

Up Next
Arkansas and LSU will face off in game two of the three-game series on Saturday as the Hogs will try to win the series outright. First pitch is scheduled for 6 p.m. at Baum Stadium. The game will be broadcast on SEC Network+ and on the radio on the Razorback Sports Network.