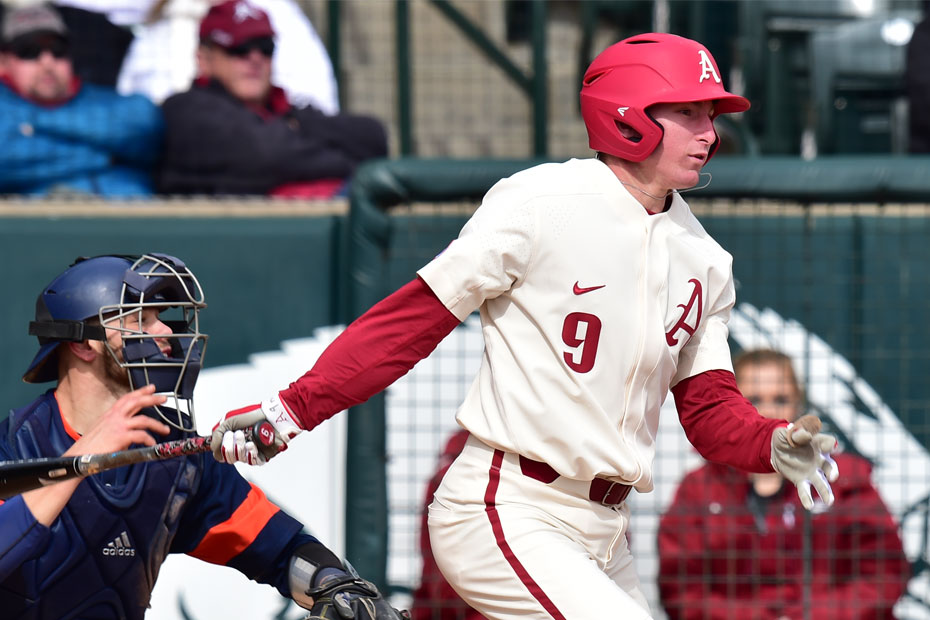 SAN DIEGO, Calif. – After jumping out to a three-run lead in the second inning Sunday morning against San Diego, the third-ranked Razorback baseball team ended up playing catch up in the final four innings as errors and missed opportunities at the plate proved costly with the Toreros defeating the Razorbacks, 7-6, on the final day of the Tony Gwynn Legacy.

Arkansas (5-2) looked to be in control early on, scoring three times on the backs of an RBI single from Casey Opitz and a two-RBI double by Jax Biggers. However, the Hogs were unable to tack on any more as San Diego starting pitcher Nick Sprengel found his control to escape the second inning with the bases loaded and pitch lights out for two more innings.

USD pulled within one in the third after a Tyler Herburger home run to right-centerfield and then took a big 7-3 lead in the fifth after Arkansas, once again, fell victim to the error bug. A Kevin Collard single to right field eventually led to two runs scoring on two separate throwing errors from the Arkansas defense. It was the third-straight game Arkansas had suffered two or more errors in a game.

The Hogs nearly made a great comeback after scoring once in the seventh on an Erc Cole single to bring in Opitz and then twice in the eighth on a two-RBI bloop single to center by pinch hitter Grant Koch. Unfortunately, the Hogs went down in order in the ninth to fall to the Toreros, 7-6.

Opitz and Cole finished the game with two hits each. For Opitz, he was making his first collegiate start at catcher and responded well, going 2-for-3 at the plate with two runs scored and an RBI. As for Cole, Sunday marked his third multi-hit game of the season, which leads all Razorbacks.

On the mound, junior right-hander Barrett Loseke got the start and pitched well for two innings before running into trouble in the third after the home run by Herburger. Sophomore Evan Lee, who followed Loseke, ended up taking the loss on Sunday after giving up two earned runs in 1.1 innings with one walk and one strikeout.

As a team, Arkansas finishes the week in San Diego with a 2-2 record, winning games over Arizona and San Diego State. The pitching staff had a stellar week, combining for a 2.31 ERA  with just nine earned runs allowed over 35 innings and 39 strikeouts. Opposing teams batted just .202 against the Arkansas hurlers over the last four games.

Up Next
Arkansas returns to Baum Stadium for a five-game stretch over five days starting on Wednesday against Dayton with first pitch at 3 p.m. The Flyers and Razorbacks will meet again on Thursday to finish the two-game series and it will also start at 3 p.m. Both games will be televised online on SEC Network+ via the Watch ESPN app and WatchESPN.com.