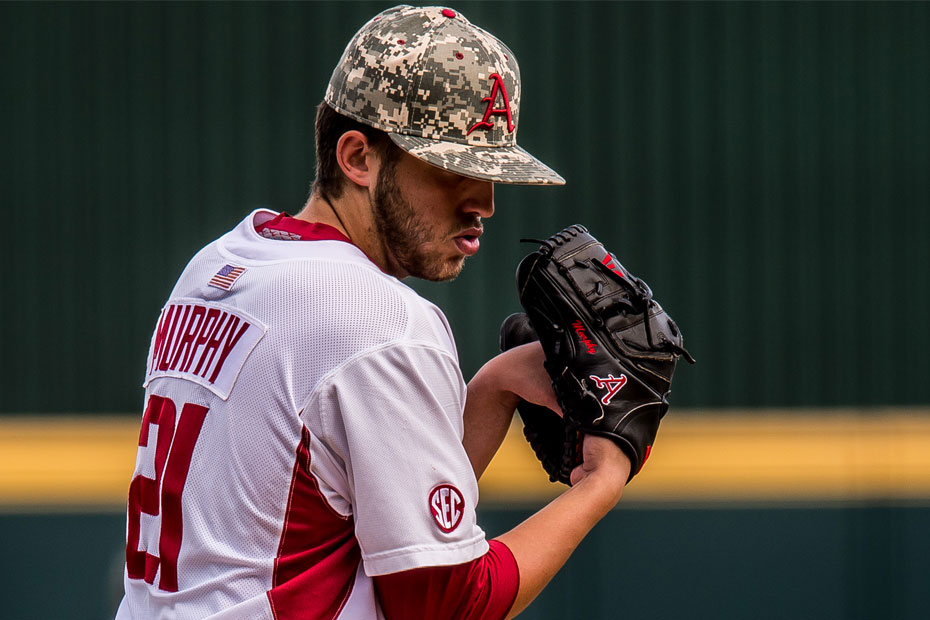 AUBURN, Ala. – No. 14 Arkansas and No. 10 Auburn went back and forth all day Sunday at Plainsman Park, but a three-run seventh inning and a two-run eighth for the Tigers proved to be too much in the end, as Auburn defeated Arkansas 11-6, to take the series.

Arkansas battled back from being down 4-1 after two innings to tie the game at 5-5 in the fourth, and then 6-6 in the seventh. However, Auburn’s bats continued to have a hot weekend and the Razorback bullpen was not able to hold them off.

The Hogs still scored six runs on 12 hits in the game, its first game of the series with 10 or more hits. Jake Arledge, Chad Spanberger, and Grant Koch each turned in multi-hit games. Spanberger went 4-for-5 at the plate with one run scored and two RBIs.

It’s the second four-hit game for Spanberger this season and the fifth game this year that a Razorback has recorded four or more hits in a single game.

Redshirt senior Josh Alberius made his ninth start of the year, giving up four runs off of a home run by Luke Jarvis and a two-RBI double by Jonah Todd, before being relieved by Kevin Kopps in the second inning trailing 4-1.

One day after holding the Auburn lineup scoreless in the final seven innings, it was the opposite for the Arkansas bullpen on Sunday. The Tigers scored seven runs off Razorback relievers in the game, three off senior Cannon Chadwick in the eighth, who ended up with the loss to fall to 4-1 on the year.

The Razorbacks started to inch their way back after Jax Biggers hit a sacrifice fly in the second to make it 4-2, for his only RBI of the game. Arkansas’ best inning came in the fourth, with three runs coming from four singles. Jake Arledge and Spanberger provided RBI singles to tie the game at 5 a piece.

Unfortunately, Auburn answered right back with a run in the bottom of the fourth to retake the lead, working out a sacrifice fly from Jarvis off Kacey Murphy. Murphy did end up with the most effective outing on the staff as he threw scoreless frames in the fifth and sixth, striking out two and only giving up two hits.

The Razorbacks looked to have a big inning brewing in the seventh with the table set by a pair of singles from Arledge and Spanberger to put runners on the corners with no outs. Arkansas just managed to tie the game again with a single run from a Luke Bonfield groundout to make it 6-6.

Auburn answered the call again, with five runs over the final two innings, three in the seventh on three doubles, and two in the eighth on a Dylan Ingram home run and a Josh Anthony double.

Up Next
Arkansas stays on the road for its next game when it travels to Kansas City, Missouri to take on Kansas State at Kauffman Stadium, the home of the Kansas City Royals, on Tuesday. First pitch is slated for 6 p.m. and will be televised on CST.