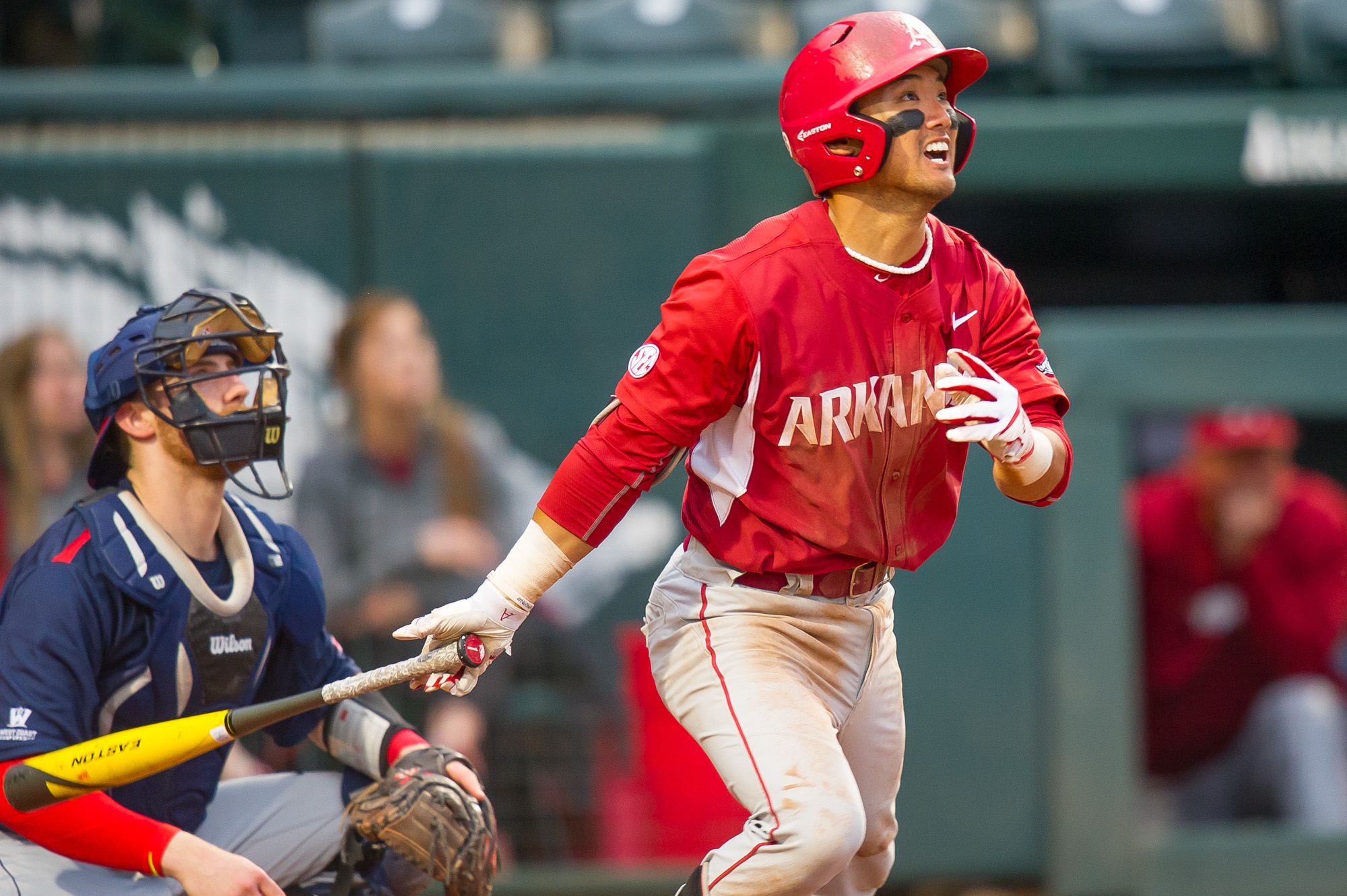 FAYETTEVILLE, Ark. – Senior infielder Rick Nomura hit a go-ahead grand slam in the sixth inning Wednesday afternoon to give the 14th-ranked Razorback baseball team a 10-6 lead over Gonzaga, but the Bulldogs benefitted from mistakes by the Hog bullpen to score six-straight runs in the final innings to win 15-10.

“I thought the team did a nice job of fighting back,” Arkansas head coach Dave Van Horn said. “They were down and they took the lead. I see room for improvement on that front. These non-conference games give me an opportunity to evaluate who can be trusted and it gives players the opportunity to demonstrate their ability to finish.”

The Hogs, who were down 6-3 after three and half innings, battled back to tie the game in the fourth on the backs of three two-out walks and a two RBI single from Cullen Gassaway. Then, Nomura’s slam in the sixth seemed to give Arkansas a big enough cushion for the final three frames.

Nomura’s slam was his first career grand slam. He ended up with five RBI in game, going 2-for-4 with a run scored. The five RBI is a career-high. As for Gassaway, he, along with Nomura and Carson Shaddy, finished with a multi-hit game going 2-for-3 with two RBI and a run scored with two walks.

“He gave me a good count,” Nomura said after the game. “I was looking for something up and just trying to put a good swing on it and get the runners in.”

However, the Razorback bullpen struggled to keep Gonzaga off the basepaths as the Bulldogs scored nine-straight runs, five coming in the seventh inning. Anthony Dahl took the loss for the Razorbacks as he is now 1-1 on the year. Sam Hellinger gets the win for Gonzaga as he is also 1-1 on the season.

Dahl entered the game in the middle of the seventh inning with Arkansas’ lead already cut to 10-8, but he hit two batters on his first two pitches to re-load the bases for the second time that inning and was pulled right after for Jordan Rodriguez. Those two runners ended up being the tying and go-ahead runs after they later scored on a walk and a double play ball to take a 11-10 lead.

Freshman Barrett Loseke had the most effective outing out of the 12 pitchers that Arkansas used Wednesday afternoon. Loseke went a good 3.0 innings, allowing just one hit without giving up a run and striking out one. It was his fourth appearance of the season and he has yet to yield a run through 6.2 innings. Only he and Doug Willey are the only Razorback pitchers to have gone at least five combined innings this season and yet to give up a run.

“It was nice to see Barrett Loseke come out there and throw the ball really well for us,” Van Horn said. “We didn’t want to get his pitch count up any more. It would have been nice to send him back out there, but we were unaware of the outcome of the game.”

Arkansas didn’t have much of a response through the seventh, eighth and ninth innings on offense as only one batter reached base via walk in the final 10 plate appearances of the game.

Before the seventh inning, Arkansas’ bats looked red hot as it had already tallied 10 runs on 10 hits and looked to have the momentum in their favor. The 10 runs is the sixth time this season the Hogs have notched double-digit run totals in a single-game.

The Razorbacks were especially good in at-bats with two outs, going 6-for-14 (.429) as a team. Both Gassaway’s game-tying single and Nomura’s go-ahead grand slam as were 9-of-10 of Arkansas’ runs in the entire game were all with two outs on the scoreboard

Arkansas continues its longest homestand of the season this weekend as it hosts Western Illinois for a three-game series at Baum Stadium starting on Friday. First pitch between the Hogs and Leathernecks is set for 3 p.m. and can be seen on SEC Network+. All three games of the series can also be heard on the radio via the Razorback Sports Network from IMG.