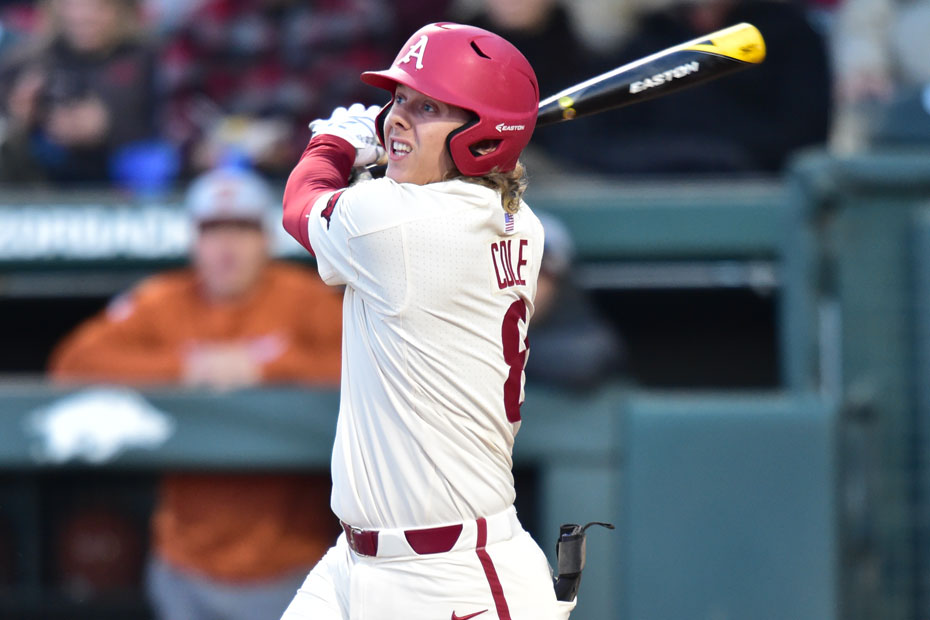 STARKVILLE, Miss. – Even after jumping out to a 5-0 lead, with four off a grand slam from Eric Cole, Friday night, the No. 3 Arkansas Razorbacks couldn’t hold off a late rally from the Mississippi State Bulldogs and could not get a baserunner over the final four innings before falling, 6-5, in the series opener at Dudy Noble Field.

The loss drops Arkansas’ overall record to 28-11 and is just its’ second loss in its last 11 games. In conference play, the Hogs are now 10-6 and still leading by a half game in the SEC Western Division over LSU. Mississippi State ups its record to 20-19 overall and 6-10 in league play.

Cole’s grand slam capped a four-run, four-hit second inning that had the Hogs cruising early over the Bulldogs. They added a sacrifice fly in the fifth inning that led to the eventual early exit for MSU starting pitcher Konnor Pilkington.

However, that was the end of Arkansas’ offense for the rest of the game as Bulldog reliever J.P. France retired 12-straight batters to end the game, striking out nine.

As for Cole, his slam was Arkansas’ second grand slam of the season, joining sophomore Jordan McFarland as the only Razorbacks to hit a grand slam this year. He finished the game 1-for-4 with the grand slam as his only hit. He now has eight home runs on the year and is one of four Hogs with eight or more home runs this season.

Blaine Knight was sharp through his 5.2 innings of work, but gave up a three-run home run in the bottom of the sixth inning before being relieved by sophomore Matt Cronin four batters later. Knight finished with the no decision and remains undefeated this season  It’s only his fourth in 10 starts that Knight hasn’t gone six innings or more and he’s struck out four or more in all 10 his outings this year.

Cronin ends up taking the loss as he gave up three earned runs over two innings, while striking out five but only gave up one hit. Cronin struck out the first four batters he faced, but ran into trouble in the eighth when he walked the first two batters in the inning before and then allowed a two-out two RBI single to Jordan Westburg, which tied the game at 5-5.

Offensively for the Hogs, Heston Kjerstad, Grant Koch, and Jax Biggers all turned in two-hit games, but only Cole and Dominic Fletcher drove in runs. Four of Arkansas’ five runs came off Cole’s grand slam, while Fletcher had the sacrifice fly in the fifth inning. The four RBIs are a career-high for Cole and his eighth multi-RBI game of the season.

Up Next
Arkansas and Mississippi State will play a doubleheader on Saturday at Dudy Noble Field to complete the series due to severe weather that is forecasted for the Starkville area on Sunday. Both games of the doubleheader will be nine innings and both games will be televised on SEC Network+. First pitch on Saturday is set for noon and the second game will start approximately 45 minutes at the conclusion of the first game.