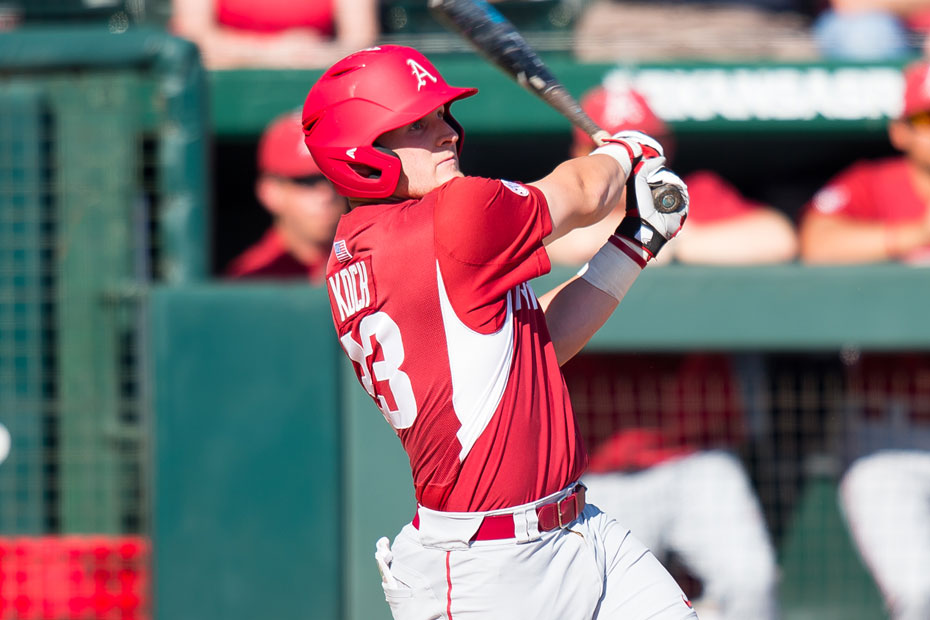 SPRINGFIELD, Mo. – The 15th-ranked Arkansas baseball team scored at least one run in all but three innings Tuesday night, including a five-run fourth, to cruise past Missouri State, 12-4, at Hammons Field.

The win is the Hogs’ 26th of the year, matching its total from a year ago with still a month and a half of the season left as they are now 26-8.

The Razorback bats started out hot and never cooled off as they tallied a season-high 18 hits in the game, with five players recording multi-hit performances. The hit total by the Hogs is the 17th game with 10 or more hits this year and fifth game of 15 or more. This season, Arkansas is 17-1 when collecting 10 or more hits.

Juniors Chad Spanberger, Luke Bonfield, sophomore Grant Koch, and freshman Jordan McFarland each tallied a team-high three hits in the game. Spanberger reached base in five of his six plate appearances, walking twice to go along with his three RBIs.

For Bonfield, he went 3-for-6 at the plate with three RBIs, his team-leading fifth game with three or more driven in. He also hit his first triple of his career in the seventh inning, one of two triples hit in the game by the Razorbacks.

Koch had the only perfect day in the batter’s box, as he was 3-for-3 with two walks and two RBIs, marking his fourth game with three hits or more.

The Razorbacks used eight pitchers in the game, each throwing no more than 1.2 innings. Sophomore Kacey Murphy got the start and gave up just a single earned run in the first inning off a Jake Burger home run. Murphy finished with two strikeouts and just three hits given up in 1.2 innings.

Freshman Matt Cronin earned the win after holding the Bears scoreless from the end of the third inning and into the fifth inning. At that time, Missouri State had already come back twice from one-run deficits. After Arkansas scored five runs in the top of the fourth, Cronin worked out of a lead-off single and two-out walk to prevent the Bears from coming back a third time.

In the previous half inning, the five-run fourth was enough to put the Razorbacks well ahead for the remainder of the game. In that inning, seven batters reached base before the first out was recorded. The big hit coming from Spanberger, who laced a two-RBI double off the left field wall, missing a home run by a few feet.

Tuesday’s game was Spanberger’s second three-hit performance in four days and he extended his hitting streak to seven games, the longest active streak on the team.

Up Next
Arkansas returns home for a three-game Southeastern Conference series with Georgia starting on Thursday at Baum Stadium. First pitch between the Razorbacks and Bulldogs for game one is set for 6:30 p.m. and will be broadcast on SEC Network+ and on the radio on the Razorback Sports Network.