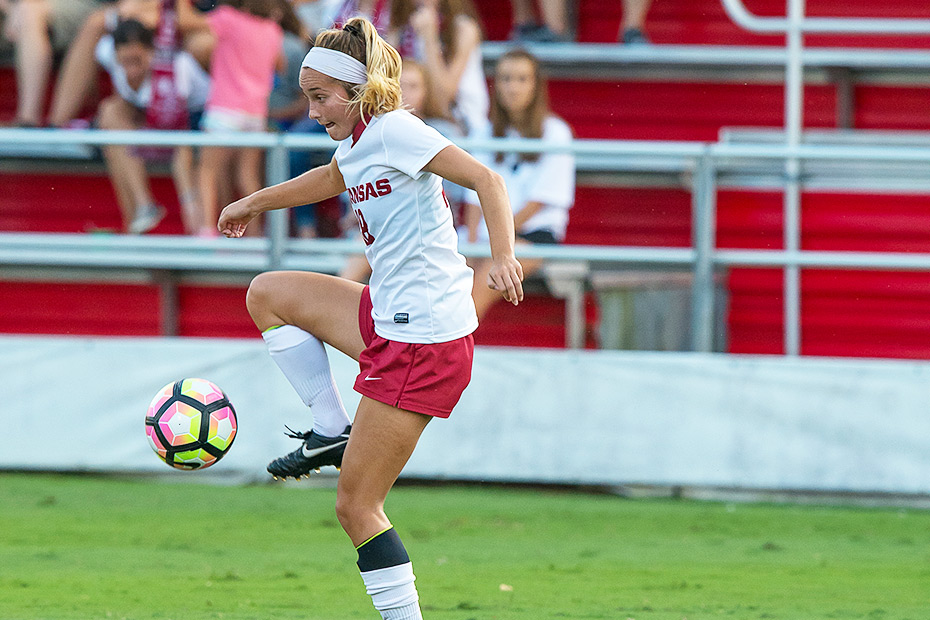 COLUMBIA, S.C. – No. 11 Arkansas fell to No. 4 South Carolina 3-1 at Eugene E. Stone III Stadium on Sunday afternoon in a highly-anticipated matchup between the final two undefeated teams in the Southeastern Conference.

After South Carolina senior forward Daija Griffin scored a goal during the opening minute of the match, Arkansas senior midfielder Claire Kelley scored the equalizer in the 36th minute – her sixth goal of the season and third consecutive game she’s found the back of the net.

Kelley’s goal also marked only the second time this season that South Carolina has allowed a goal to an SEC opponent. She is now second on the team in goals (6), but leads in assists (10) and points (22).

Arkansas would give up a pair of goals to the Gamecocks’ Sophie Groff and Lindsey Lane in the 49th and 59th minutes of play, respectively, to put the game out of reach. The loss drops the Razorbacks to 13-2-0 on the season and a 6-1 mark within the conference. South Carolina improves to 13-0-1 overall and 7-0 in the SEC.

“First credit to South Carolina. They are a good team,” head coach Colby Hale said. “That being said, it didn’t feel like us. Shots were 10-10 and corners 3-2, but we maybe lacked that little extra that this team has become synonymous with. As always, we’ll watch some video and see what we did well and what we can work on. We’ll let this sting for a few hours and then move on to prepare for a good Auburn team.”

Arkansas will face No. 18 Auburn on the road on Fri., Oct. 14 in a match to be streamed live on SEC Network+ via the WatchESPN app.