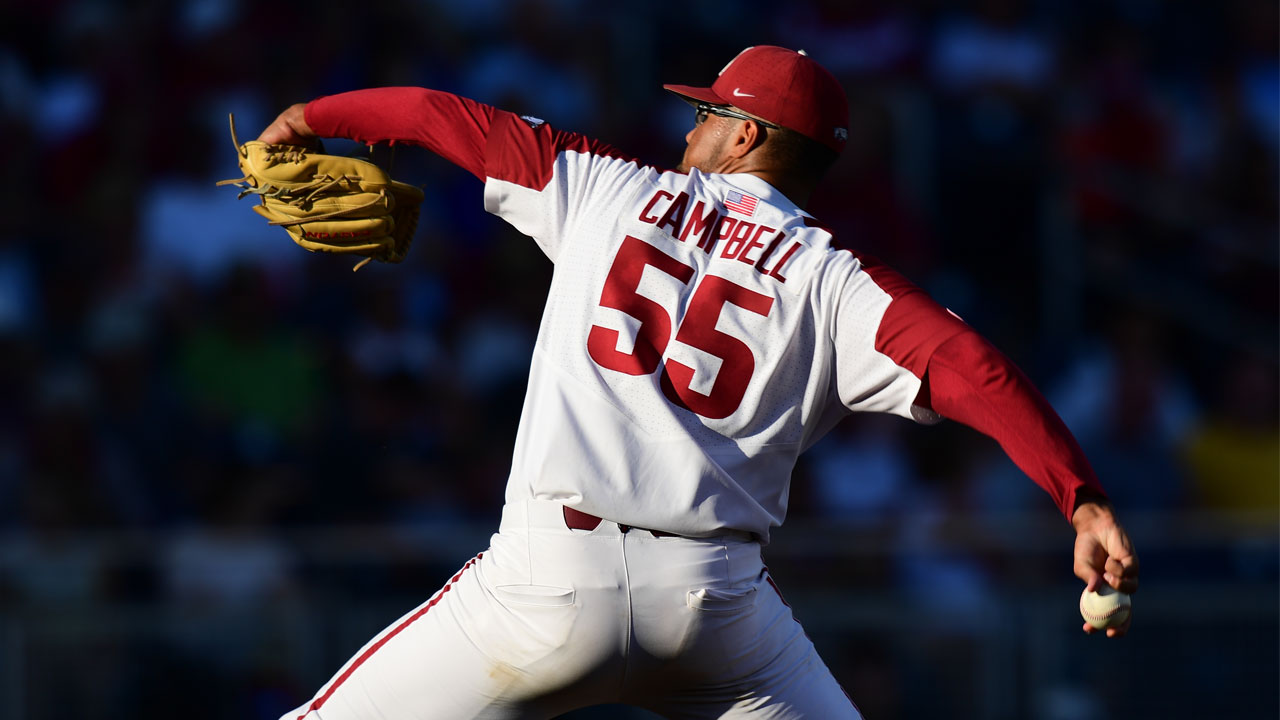 OMAHA, Neb. – The fifth-seeded Razorback baseball team dropped a 1-0 heartbreaker to Florida State on Saturday in its first game of the 2019 College World Series at TD Ameritrade Park in Omaha.

Right-hander Isaiah Campbell put on another masterful performance in his third College World Series game of his career, throwing seven innings of shutout ball and allowing five hits with two walks. He also struck out 10 batters, his fifth outing with 10 or more strikeouts this year. The double-digit punch out total broke his own school record for strikeouts in a CWS game, set last year against Florida (eight) on June 22, 2018.

After eight scoreless innings, the Seminoles (42-21) edged out a run in the top of the ninth to take a 1-0 lead. FSU put two men on to open the frame via a hit-by-pitch and fielder’s choice with nobody out.

Junior Matt Cronin took over on the mound for redshirt junior Cody Scroggins, who relieved Campbell in the eighth, and the Seminoles moved the duo into scoring position with a successful sacrifice bunt from Matheu Nelson. With one away, a pinch-hitting Cooper Swanson lifted a sacrifice fly to right field to push Florida State ahead.

Arkansas (46-19) managed only five hits in the game, two from freshman Christian Franklin, who went 2-for-3 with a double. Trevor Ezell, Dominic Fletcher and Casey Opitz all added one hit in the game. Ezell extended his hit streak to a team-leading eight games. He’s 16-for-32 (.500) in the NCAA Tournament with eight extra-base hits and only five strikeouts.

After meeting five times in the all-time series prior to Saturday, tonight’s game marked the sixth-ever meeting between the two schools, all in the postseason, but first in the College World Series. This was the first loss Arkansas has ever suffered against Florida State.

Arkansas will now move to the losers’ bracket and will face eight-seed Texas Tech on Monday at 1 p.m. in an elimination game. The game will be broadcast on ESPN.

Arkansas-Florida State Game Notes
>> Saturday marked the sixth time Arkansas and Florida State have squared off on the diamond, with all six coming during the postseason. The contest was the first matchup in the College World Series. The Razorbacks are 5-1 against the Seminoles after Saturday’s decision.

>> Isaiah Campbell reached five strikeouts with his first out in the third inning. It was the 14th time this season he’s recorded five or more punch outs in a game. Campbell’s final line was 7.0 IP, 5 H, 0 R, 2 BB, 10 K.

>> Campbell’s 10 K’s broke his own school record for strikeouts in a College World Series game, set against Florida on June 22, 2018 (5.1 IP). He ranks fifth in the Arkansas record books in single-season strikeouts with 125 and is eighth all-time in career totals with 224.

>> With a single in the third inning, Trevor Ezell extended his hitting streak to eight games, including every game of the 2019 NCAA Tournament. This postseason, he is batting 16-of-32 (.500) with eight RBIs and eight runs scored.

>> Dominic Fletcher’s two-out single in the sixth inning pushed his hitting streak to five games. He is 8-of-20 at the plate during the stretch.

>> Christian Franklin posted his 16th multi-hit game of the season after recording a single and a double against the Seminoles. He ranks seventh on the team in multi-hit performances this season.

>> Cody Scroggins posted a clean eighth inning against Florida State on Saturday. Entering the ninth, he racked up 9.2 scoreless frames on the mound, dating back to Arkansas’ SEC Tournament opener vs. Ole Miss on May 22.

Razorback Quotables
“It was just a really, really well-pitched game by both teams. I thought Isaiah (Campbell) threw the ball extremely well and pitch count got up just a little bit and then he had a couple quick innings there. He got us through seven. (Drew) Parrish was really good. He was really good when we got runners on, especially in scoring position, mixing that changeup, fastball, breaking ball. We hit some balls hard early at people, hit a couple balls off the end of the bat that just happened to go right at them, as well, but that’s kind of the way the game works. But give them credit, they did a great job, both pitchers..” – Head coach Dave Van Horn on the loss to Florida State

“He did everything he could to give us an opportunity to win the game. He probably didn’t have his best stuff early, kind of kicked it into gear in the middle a little bit and got out of a jam or two. But it seems like I don’t know how many starts he’s had now, probably 18 or so. It seems like every time he goes out there, he gives us six plus, seven plus, and we were in every game and had a chance to win it. He’s just been special. I think the players know that when they come to the field and he’s starting that we have a really good opportunity to win the ballgame.” – Head coach Dave Van Horn on Isaiah Campbell

“Yeah, it’s fun when you’re battling, putting up 0’s. It’s the biggest stage in baseball and to do it in front of 26,000 fans, it’s special. We gave the fans a treat, pitchers’ duel, and I definitely found my groove, started having all four pitches and just felt more comfortable on the mound and just commanded all four pitches and just threw them for strikes, got ahead of more hitters and just got quick outs.” – Isaiah Campbell on having a pitchers’ duel in the College World Series

“Oh yeah, we’re just going to tip the cap. They did a fantastic job on the mound, (Drew) Parrish and (JC) Flowers both there at the end. Like I said, they kept us off balance. Really kept the off speed down, so there weren’t too much pitches we shall capitalize on or really had chances to capitalize on. He was that good today.” – Trevor Ezell on the Florida State pitching staff