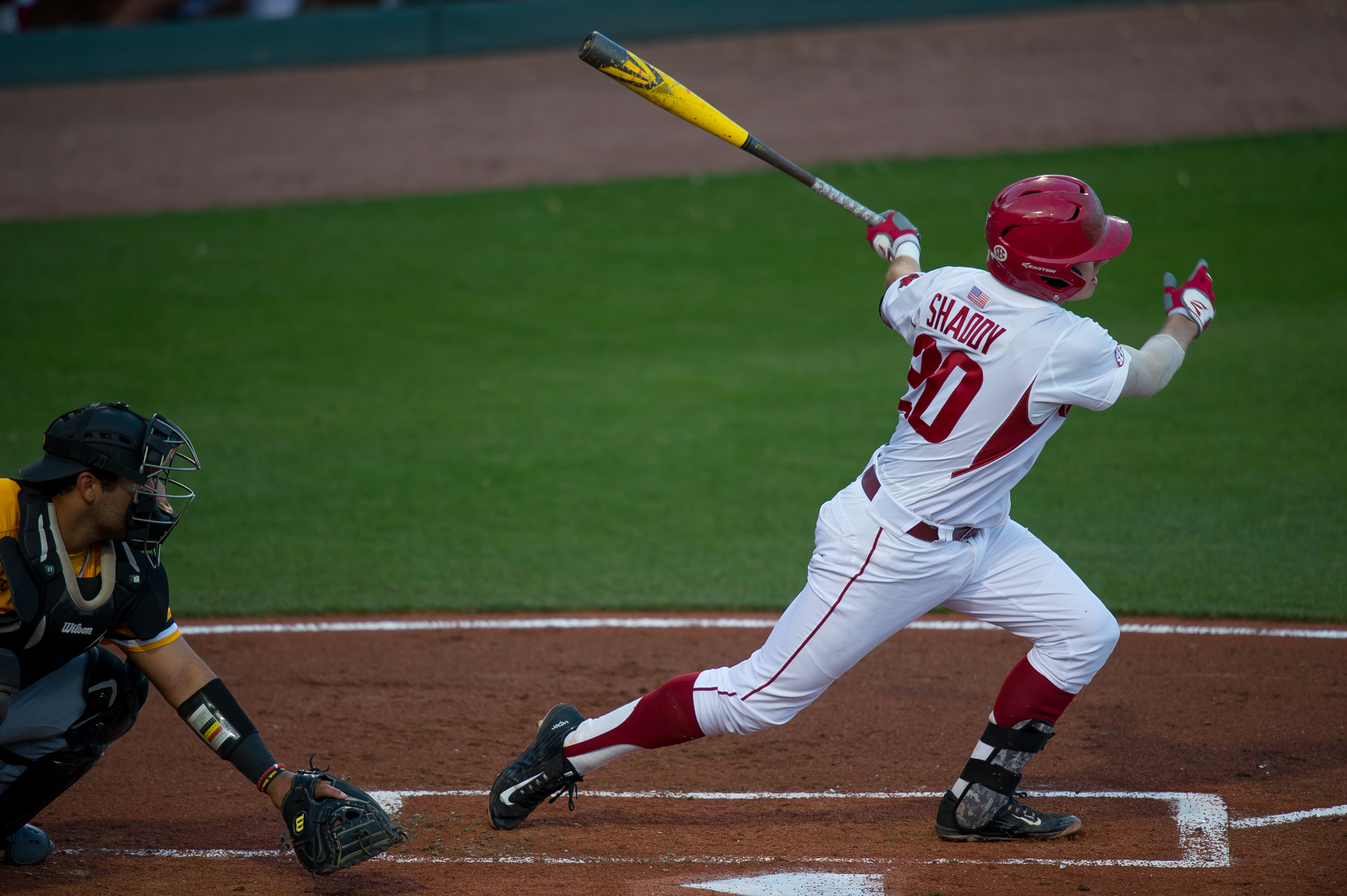 COLUMBIA, S.C. – The No. 13 Arkansas baseball team had a 6-1 lead entering the fifth inning Sunday against No. 12 South Carolina, but the Gamecocks chipped away at that lead over the last four innings and completed the five-run comeback in the eighth with a three-run home run by John Jones off Zach Jackson. The home run gave the Gamecocks an 8-6 advantage and they held on to that lead in the ninth to finish the three-game sweep of the Razorbacks at Founders Park in Columbia, S.C.

The Razorbacks (15-6, 0-3 SEC) scored six runs over the course of the first four innings, striking for three in each of the third and fourth innings. It was the first lead the Hogs had all weekend against South Carolina (20-2, 3-0 SEC) and it was due to the timely hitting of Carson Shaddy, Clark Eagan and Darien Simms.

Shaddy, who went 1-for-4 on the day with two RBI, got both of his RBI in the third with a single up the middle to score Simms and Eagan. Cody Scroggins scored earlier in the inning on a wild pitch, giving Arkansas the game’s first run.

Shaddy completed a solid opening weekend to SEC play as he led the team with a .364 average over the three-game series with one double and five RBI. Shaddy only struck out once and also stole one base.

Along with Shaddy, Eagan went 1-for-4 with an RBI and a run scored. His RBI was the final run Arkansas scored in the game as it capped a three-run fourth inning, giving the Razorbacks a 6-1 lead.

Cullen Gassaway and Chad Spanberger both ended up as Arkansas’s only multi-hit performers on Sunday. Gassaway went 2-for-4 with a run scored, while Spanberger was 2-for-3 with a walk and run scored.

As a team, Arkansas had nine hits in the game, but struck out 11 times for its second double-digit strikeout total of the weekend.

Jackson took the loss as he is now 1-2 on the year after going 2.2 innings of relief and giving up four earned runs on three hits with five walks, his season-high.

The Hogs looked to be the team in charge when they padded their lead in the third, starting with a lead-off double by Rick Nomura. Two batters later, Arkansas loaded the bases after Gassaway and Chad Spanberger both reached via the single and the walk, respectively.

Catcher Alex Gosser got the sacrifice fly to score Nomura, which forced a pitching change for South Carolina. Arkansas had chased Gamecock starting pitcher Adam Hill and were out to a 4-1 lead with still men in scoring position.

After Scroggins struck out swinging, Simms came through with a single of his own off a beautiful bunt down the third base line. South Carolina relief pitcher Vince Fiori tried to make the throw to first anyway, even though Simms was going to be safe at first and threw the ball away allowing another run to come home and make it 5-1.

Clark Eagan finished off the rally with another RBI single to score Spanberger and after all was said and done, Arkansas had a commanding 6-1 lead hitting the middle innings of the game.

Arkansas starting pitcher Keaton McKinney made it through 4.2 innings of work and, for the most part, kept the Gamecocks offense in check, allowing just one run on three hits through his first four frames. He ran into trouble in the fifth after getting two quick outs before giving up four-straight hits, two for extra bases, as the two-RBI triple from Dom Thompson-Williams cut the lead to 6-4.

Jackson was brought in to prevent any more runs from coming in and even though he loaded the bases with two walks, he struck out DC Arendas to get out of the jam and preserve the two-run lead for the Hogs.

Jackson threw well over the next two innings. Even though he gave up a run in the sixth on a double by Jones, Jackson continued to work his changeup well and held the one-run lead into the eighth.

Jones came back to hurt the Hogs in the eighth as Jackson gave up a one-out single to Gene Cone and then a walk to LT Tolbert to give Jones another RBI opportunity. Jones hit the go-ahead three-run home run, which spelled the end for Jackson as Van Horn made the call to the bullpen and brought in Jordan Rodriguez. Rodriguez retired the final two batters to get out of the inning, but South Carolina already had the two-run lead heading to the ninth inning.

Arkansas returns to the field next weekend to host Auburn for a three-game series starting Friday at Baum Stadium. The Razorbacks will have no midweek games this week during spring break. First pitch between the Hogs and Tigers will be at 6:30 p.m. on Friday and will be broadcast on SEC Network+.