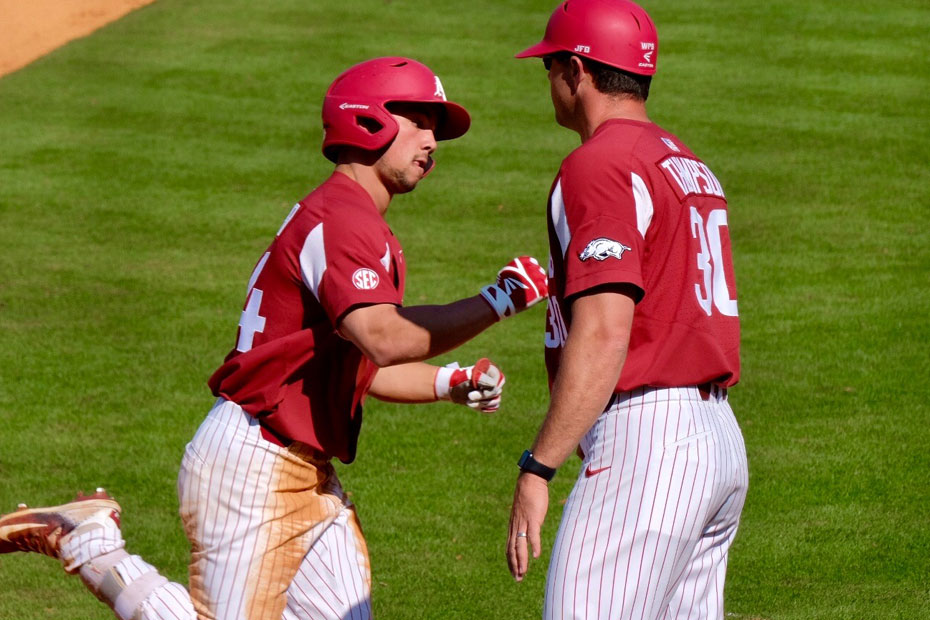 OXFORD, Miss. – After trailing by as much as six going into the seventh inning, the No. 5 Arkansas Razorbacks scored eight times over the seventh and eighth innings to pull within one of the No. 4 Ole Miss Rebels on Saturday afternoon. Unfortunately, the Hogs left the tying run on second base in the top of the ninth inning, falling to the Rebels, 11-10, and suffering a tough series loss.

Ole Miss (25-4, 5-4 SEC) led 8-2 going into the top of the seventh inning, but after home runs from sophomore Dominic Fletcher, junior Grant Koch, and junior Eric Cole, Arkansas (19-9, 5-4 SEC) found itself in the thick of it with the bases loaded in the eighth inning and a chance to take the lead.

The Razorbacks couldn’t quite tie the game in the eighth and left a runner stranded on second in the ninth after Luke Bonfield led off the inning with a double down the left field line. It was nearly Arkansas’ largest comeback of the season as the Hogs knocked out nine of their 12 hits in the final three innings.

Freshman Heston Kjerstad came away, once again, with the big day at the plate, falling a triple shy of the cycle for the second time this year, as he went 3-for-5 with two runs scored and two RBIs. Kjerstad blasted his seventh home run of the year in the sixth inning, which ties him for the team lead. His long ball practically ignited the offense that went on to score eight more runs in the next two innings.

It’s been a strong roadtrip for Kjerstad as he’s hit .455 over the eight-game stretch, leading the team in all the slash categories (.970 slg%, .514 ob%), and he’s totaled 15 hits with nine going for extra bases. He also clubbed four home runs after hitting just three in the first 20 games of the season.

On Saturday, all but one of the Razorback starters recorded at least one hit. Joining Kjerstad in the multi-hit category was Jax Biggers and Cole, who, combined, drove in all four runs the Hogs scored in the eighth inning.

Cole finished the game 2-for-5 at the plate with three RBIs, his fifth game this season with three RBIs or more. All three of those runs came on one swing when he crushed the first pitch he saw from Will Stokes to get the Hogs within 11-10. It was Cole’s seventh home run of the year.

Arkansas finished the game with four home runs, a welcomed sight after going homerless the day before, snapping an 11-game streak with at least one long ball. It was the fifth time this year that the Razorbacks have hit four or more home runs in a game and upped their season total to 53 home runs, which still leads the SEC.

On the pitching side, junior lefty Kacey Murphy looked good through 4.1 innings, but was denied a more efficient outing as the Rebels took advantage of Razorback fielding errors in the fourth and fifth innings to score three unearned runs. The only earned run Murphy allowed was from a Cole Zabowski home run to lead off the fifth. Murphy didn’t walk a batter and struck out four, but was saddled with the loss, his second of the year.

Up Next
After 13 days on the road and eight games away from Baum Stadium, the Razorbacks will finally return home for 15 of its next 18 games, including one at Dickey-Stephens Park in North Little Rock, Arkansas. The Hogs will get Sunday and Monday off before returning to the field to face ULM for a two-game midweek series starting on Tuesday.

First pitch with the Warhawks on Tuesday is set for 6:30 p.m. and will be available to watch online on SEC Network+ via the Watch ESPN app and WatchESPN.com.