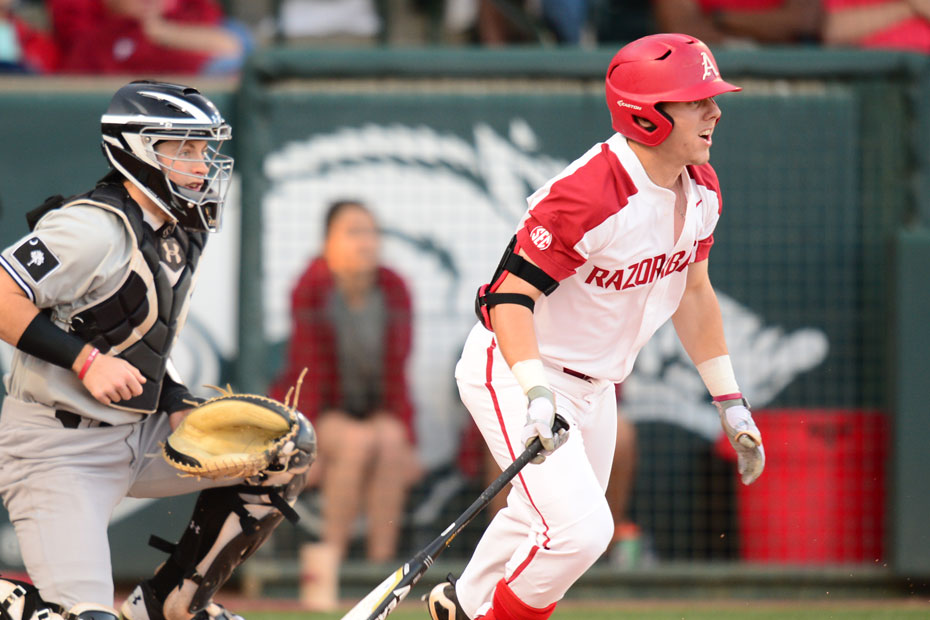 FAYETTEVILLE, Ark. – A windy day at Baum Stadium kept the runs at a minimum Thursday night between second-ranked Arkansas and South Carolina. Hits, however, were plentiful, but even though Arkansas outhit South Carolina, 13-12, it left 12 runners on base, including four bases-loaded situations in a 3-2 loss to the Gamecocks.

It’s the first series-opening loss the Hogs have suffered this year as starting pitcher Blaine Knight had his shortest outing of the year, going four innings on 70 pitches with only one run allowed on six hits. The loss drops the Razorbacks to 25-10 overall and 8-5 in conference play.

The loss is just the third suffered by the Razorbacks at home this year as they fall to 19-3 in games played at Baum Stadium. It’s also been a string of close games as the last three games played by Arkansas have been decided by one run. The Hogs are now 7-6 on the year in one-run games.

South Carolina’s Carlos Cortes hit a go-ahead two-run home run in the fifth inning off reliever Barrett Loseke to give the Gamecocks the 3-2 lead. However, the Hogs left the bases loaded twice in the bottom of the fifth and seventh innings as they couldn’t drive in the tying run.

Fletcher’s single in the second inning extended his hitting streak to six games, the longest active streak on the team. Dating back to April 4 against ULM, Fletcher is hitting .545 (12-for-22) during his streak with three three-hit games and six runs scored.

Even though Knight didn’t have his strongest outing, the Razorback bullpen did well to keep it a one-run game from the fifth inning on. Evan Lee and Cody Scroggins combined for 2.2 scoreless innings with just three hits allowed.

They also got some help in the field as a seventh-inning relay throw from Carson Shaddy prevented South Carolina from adding an insurance run. Shaddy received a good throw from the right-field wall from Cole and Shaddy turned and caught Cortes trying to score from first, beating him with his throw by about three feet.

Razorback Quotables
“I thought we played fairly good defense. They didn’t cost us anything. We just didn’t come through on offense.” – Head coach Dave Van Horn on the defense not committing an error even with strong winds

“I think we’ll respond fine. We’re pretty resilient. We’ve got an older team that knows you’re going to get beat every now and then. I think we’ll come back tomorrow with a little energy and have better results.” – Head coach Dave Van Horn on bouncing back after a loss

Up Next
Arkansas and South Carolina will meet again on Friday for game two of the three-game series. First pitch is set for 6:30 p.m. at Baum Stadium. The game can be seen online on SEC Network+.