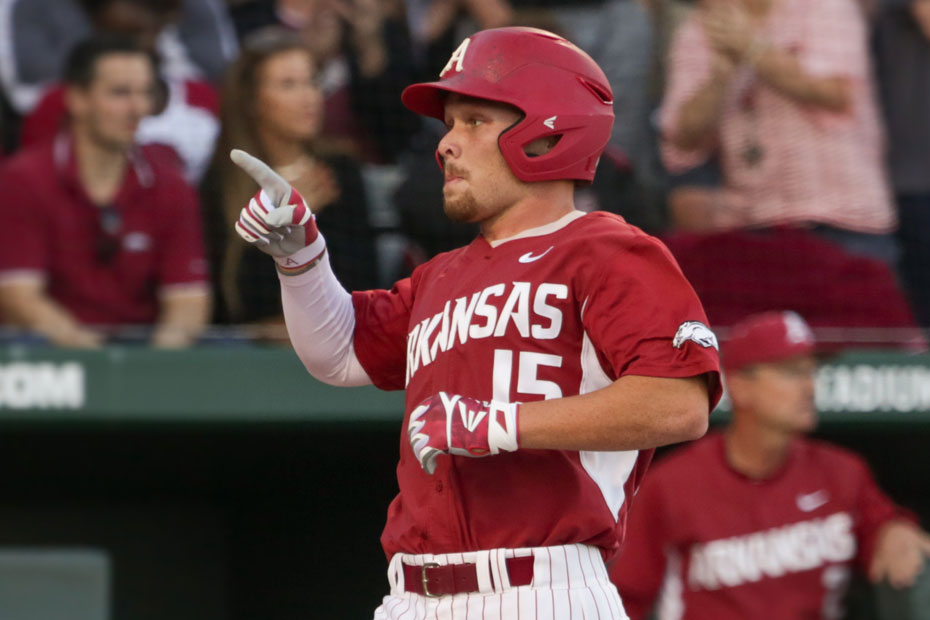 FAYETTEVILLE, Ark. – The No. 15 Arkansas Razorbacks will look to shake off the series loss to LSU from last week and keep the momentum going from its eight-run win over Missouri State as it welcomes Georgia for a three-game series at Baum Stadium starting on Thursday at 6:30 p.m.

Follow Live
All three games will be broadcast on SEC Network+ via the WatchESPN app and WatchESPN.com as Alex Perlman (PXP) and Troy Eklund (Analyst) will be calling the action. Phil Elson and Rick Schaeffer will have the radio call on the Razorback Sports Network.

Online links for all three games this weekend are available below:

Razorbacks Look To Take Control Of West
The Razorbacks look to put some space in between themselves and the rest of the SEC pack this weekend when Georgia visits Baum Stadium. Arkansas has won three of its four conference series this year, surpassing its conference series win total (2) from a year ago, and will look to win its fourth straight series over the Bulldogs since 2012. Currently tied atop the SEC Western Division with Auburn and Mississippi State, Arkansas is 8-4 in SEC play and still holds the best overall record in the league (26-8).

Hogs Knock Around 18 Hits In Missouri State Win
The Razorbacks didn’t need long to forget about the series loss to LSU as they scored 12 runs on 18 hits against Missouri State on Tuesday, in a dominating 12-4 win. The 18 hits is a season-high for the Hogs and is the 18th game this year with 10 or more hits and fifth game of 15 or more. This year, Arkansas is 17-1 when collecting 10 or more hits in a game.

Knight Named To Golden Spikes Award Watch List
Sophomore right-handed pitcher Blaine Knight was one of 40 players across the nation named to the Golden Spikes Award Midseason Watch List this week. Knight follows former teammate Zach Jackson, who was on the preseason watch list last year, and former Hog outfielder Andrew Benintendi, who won the award in 2015 as the nation’s top player. Knight has five wins on the year, four in conference play and is one of two starting pitchers in the SEC with a sub-2.00 ERA against conference opponents.

You’ve Now Entered The Blaine-Zone
Blaine Knight continued his strong start to SEC play last week against a heavy-hitting LSU squad. Knight handcuffed the Tigers over six innings without allowing a run and striking out six. In each of his conference starts, the sophomore has thrown at least six innings and struck out six or more batters. He still holds the best strikeout-to-walk ratio among all SEC pitchers (10.80) and still has the least amount of walks (5) this year.

Coming In Hot
Since conference play began four weeks ago, infielder Carson Shaddy’s offensive numbers have been off the charts. Through the first 12 SEC games, Shaddy is batting .313 (15-for-48) with three home runs and a slugging percentage of .583, the ninth-highest among all SEC players. Even though Shaddy struggled against Alabama, he came through with the go-ahead two-RBI single in the ninth inning to break a 5-5 tie. Shaddy was 1-for-12 prior to that at-bat.