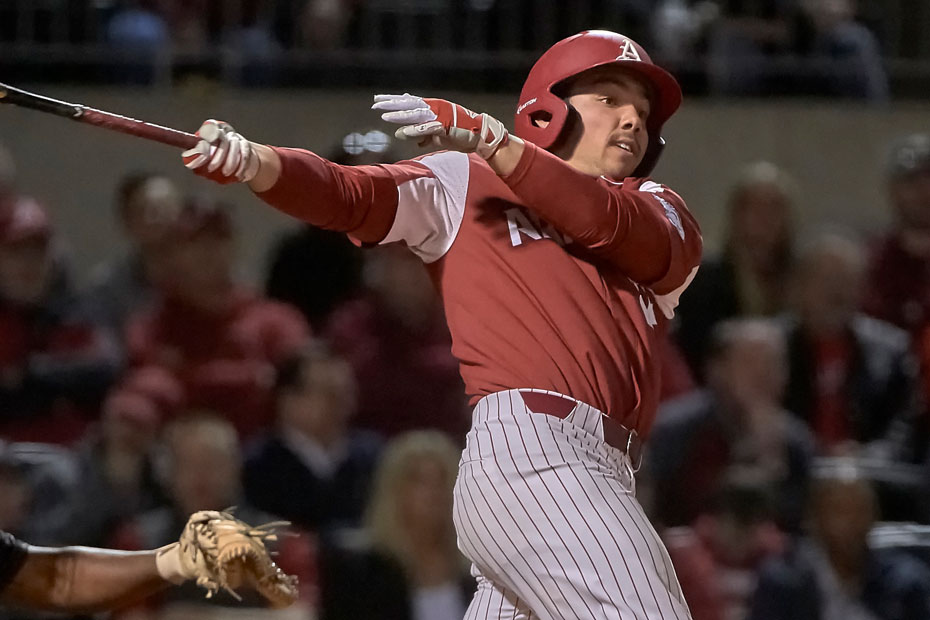 NORTH LITTLE ROCK, Ark. – The No. 2 Arkansas Razorbacks scored six runs in the seventh and eighth innings to rally late and beat Grambling State, 7-6, Tuesday night in Dickey-Stephens Park. It’s the Hogs sixth-straight victory and third-straight in North Little Rock dating back to 2016.

Arkansas (25-9, 8-4 SEC) had just one hit through the first three innings and never started putting together productive innings until the seventh when it scored twice to take its first lead of the game. Grambling (16-17) scored four runs of its own in the top of the eighth to take a 6-3 lead, but the Hogs responded back with its own four-run frame in the bottom half to take the lead for good.

The Hogs got their first four batters of the eighth on base, scoring one run on a Jordan McFarland single to left field. Four batters later, Jax Biggers brought home another run on a sacrifice fly to make it 6-5 Grambling, but Arkansas was down to two outs.

With Casey Martin on third and Carson Shaddy on first, junior Eric Cole was the next batter to step in, needing just a base hit to tie the game. Cole did more than that, lacing a long single down the right field line for his only hit of the night to easily score Martin and, also, Shaddy from first base. Shaddy’s dash home gave the Razorbacks the 7-6 lead, which they held for the remainder of the game.

In the nine years that Arkansas has played a game in North Little Rock, five have been decided by one run. This year, overall, the Hogs have played in 12 one-run games and have come out winners in seven of them.

The Hitting
Sophomore Dominic Fletcher was the only Razorback to notch more than one hit in the game as he went 3-for-4 with a run scored and an RBI. It’s his second three-hit performance in his last three games and eighth multi-hit game of the year.

Arkansas’ first five hitters in the lineup were the most productive, coming away with seven of the team’s 10 hits in the game. Along with Biggers and Cole’s RBIs, Fletcher drove in the Razorbacks’ first run of the game with a hard-hit single through the left side to score Evan Lee in the fourth inning.

The Pitching
Freshman Caleb Bolden earned the start for the second-consecutive week but ran into a little trouble early when he gave up a run on two hits in the first inning. Bolden was able to settle down and retire eight of the next 10 batters. He finished with five innings pitched and two earned runs. He allowed just four hits, while walking just two and striking out six, tying his season high.

After Bolden, head coach Dave Van Horn went to Kole Ramage and Jackson Rutledge before closing it out with Matt Cronin. Ramage and Rutledge fended off the Tigers as best they could, but four unearned runs in the eighth after an error in the infield made it a new ballgame.

Cronin was able to come in and pick up his seventh save of the year with a perfect ninth inning. The sophomore is now tied atop the SEC in saves heading into week five of conference play.

Up Next
Arkansas is back in Baum Stadium this weekend for a three-game series starting on Thursday against South Carolina. First pitch with the Gamecocks in game one is set for 6 p.m. and it will be televised on the SEC Network. Games two and three will be online only on SEC Network+ with first pitch times set at 6:30 p.m. and 2 p.m., respectively.