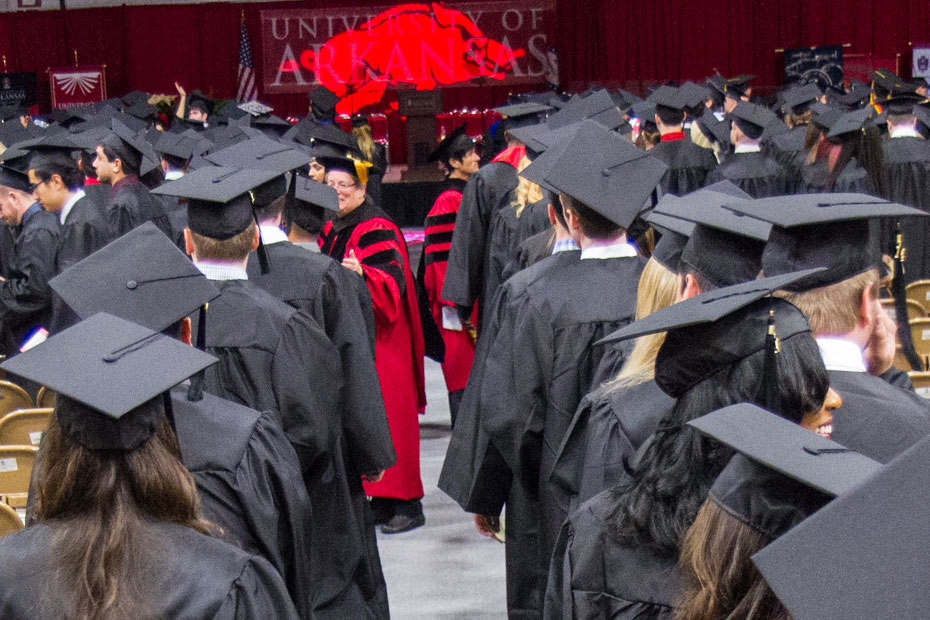 FAYETTEVILLE, Ark. – For the second-consecutive year, University of Arkansas student-athletes have combined to earn the top graduation success rate (GSR) in the history of the Razorback program according to a report released this week by the NCAA. Razorback student-athletes that entered school in 2013 earned a GSR of 85 percent, the highest GSR in school history, eclipsing the previous program best of 84 percent earned last year.

The latest GSR marked the 12th-consecutive rate of more than 70 percent by Razorback student-athletes. It marks the fifth-consecutive year that the GSR has been 78 percent or higher with this year’s GSR ranking as only the third time the GSR has reached 80 percent.

The GSR was developed as an improved measurement tool for tracking student-athletes’ academic progress leading toward graduation. The University of Arkansas has steadily improved its GSR rate since the measurement was implemented 16 years ago rising from an initial rate of 60 percent to a record 85 percent in the numbers released this week. In 2019-20, 107 Razorback student-athletes paved their names onto Senior Walk as graduates of the University of Arkansas. In the past five years, the program has averaged more than 100 graduates a year.

“Thanks to the dedicated efforts of our student-athletes, coaches and members of our academic support team, our program continues to see record-setting results in NCAA graduation success rate and other academic benchmarks,” Vice Chancellor and Director of Athletics Hunter Yurachek said. “From the time student-athletes arrive on campus, we work with them to sustain progress in their academic journey on the path to graduation. We have made tremendous progress and must continue to focus on our goal of ensuring every student-athlete, who exhausts his or her athletic eligibility, leaves our program with a degree from the University of Arkansas.”

In addition to the GSR and Federal Graduation Rate, the NCAA established the Academic Progress Rate (APR) that provides institutions with a more real-time indicator of academic success. Last spring, Arkansas exceeded the APR benchmark in all 19 sports for the eighth consecutive year including each sport exceeding the benchmark by at least 28 points. The program earned a 983.5 APR average across all sports, marking the ninth straight year the program averaged has exceeded 970.

A program record seven Razorback programs were recognized with NCAA Public Recognition Awards for ranking among the top 10 percent of teams in their respective sports nationally. Women’s cross country, women’s golf, women’s gymnastics, softball, swimming and diving, women’s tennis and volleyball all earned a perfect 1,000 multiyear rate The University of Arkansas has now earned a total of 36 public recognition awards since the program began, including 13 in the past two years.