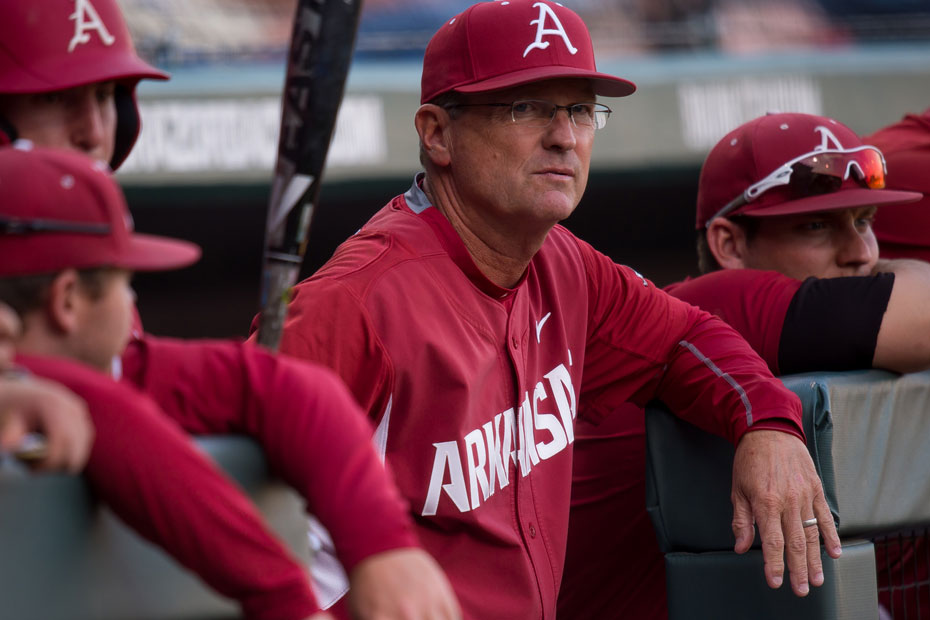 Razorbacks Reload With Arsenal Of Arms For 2019

FAYETTEVILLE, Ark. – The Razorback baseball program and head coach Dave Van Horn announced the signing of 20 student-athletes to National Letters of Intent for the 2019 season this week. The class includes a plethora of pitchers that will continue to add depth to an already loaded position for the coming years.

Van Horn, who is entering his 16th season as the Arkansas skipper, along with pitching coach Wes Johnson and newest assistant coach and recruiting coordinator Nate Thompson, found some of the best arms in the state of Arkansas as three of the four signees from the Natural State are pitchers.

Of the 20 signees, 12 will be pitchers when arriving on campus. Including the three from Arkansas, three come from Texas, two from Illinois, and one each from, Missouri, Florida, Alabama, and California.

“It’s a well-rounded class,” Van Horn said. “We’ve signed 12 pitchers, five lefties, seven righties, all with the chance to contribute right away. We’re excited with the potential of the pitching recruits that we’re bringing in. Overall, I think this group will really mesh with the freshman class that’s here now.”

As always, Van Horn and his staff made sure the best players in the state of Arkansas stayed home when deciding where to sign, including Kam’ron Mays-Hunt from nearby Bentonville High School, as well as Wade Beasley from Horatio, Arkansas, and Connor McCullough from Maumelle, Arkansas.

Mays-Hunt moved to Bentonville from White Hall, Arkansas after his freshman year and became the school’s all-time leading receiver earlier this year as he has 52 receptions for 813 yards and 12 touchdowns. His raw baseball talent has gotten plenty of notice lately while playing for the Arkansas Sticks Elite travel team. Last year with Bentonville, Mays-Hunt hit .340 with two home runs, five doubles, two triples, and 17 RBIs. He’s also pitched in the last year, making seven appearances with four saves and 19 strikeouts.

Beasley and McCullough are both top-10 players in the state of Arkansas according to Prep Baseball Report. Beasley played in the 2017 Perfect Game National Showcase over the summer and garnered a 1.11 ERA with 51 strikeouts in 31.2 innings for Horatio High School last spring.

McCullough went 4-0 this summer while playing for the Arkansas Sticks Elite travel team and struck out 44 batters for a 0.42 ERA in wins over the San Diego Show, Perfect Timing, Louisiana Knights, and BPA travel teams at the World Wood Bat Association (WWBA) Championships in Atlanta.

“We always want to get the local kids if we feel like they can come in and contribute,” Van Horn said. “The talent in the state of Arkansas continues to get better every year. There’s a lot of other schools trying to get in this state now with their recruiting. We’re already getting commitments from players for the 2019 and 2020 class and if you can keep the best players in the state at Arkansas, it’s such a good foundation. We’ve had a lot of success doing that.”

Stay tuned to ArkansasRazorbacks.com later in the day when we reveal the eight position players of the 2018 signing class.

Wade Beasley | RHP | 6-3 | 210 | R/R | Horatio, Ark. (Horatio HS)
Ranked No. 239 in the nation by Perfect Game … Participated in the 2017 Perfect Game National Showcase … Named a Perfect Game Underclassman All-American in 2017 … Garnered a 1.11 ERA with four victories in 13 appearances during his junior season with 51 strikeouts in 31.2 innings … Named to 2017 3A All-State Team … Plays for coach Lance Spigner at Horatio High School … Transferred to Horatio from Foreman High School during the summer of 2016.

Jacob Burton | RHP | 6-0 | 175 | R/R | Diana, Texas (New Diana HS)
Ranked in the top 500 in the nation by Perfect Game … Named a Perfect Game Preseason Underclassmen All-American in 2016 and 2017 … Also played in the 2016 Junior National Showcase and 2016 Perfect Game Underclass All-American Games after his sophomore season … Went 10-4 on the mound as a junior with 112 strikeouts and a 1.39 ERA … Named back-to-back 16-3A Pitcher MVP as a sophomore and junior … Selected to the TSWA All-State Team … Played for Bernie Martinez at New Diana High School.

Tyler Isenberg | RHP | 5-10 | 170 | R/R | Orange Park, Fla. (Trinity Christian Academy)
49th-ranked player in the state of Florida according to Prep Baseball Report and No. 232 in the nation … Named to back-to-back Perfect Game Preseason Underclassmen All-America Teams in 2016 and 2017 … Made six appearances as a junior for Trinity, striking out eight over 6.1 innings … Threw 12 innings for the Florida Burn travel team this summer, striking out 20, while giving up just four hits with five walks … Plays for head coach Gil Morales at Trinity Christian Academy.

Connor McCullough | RHP | 6-1 | 170 | R/R | Maumelle, Ark. (Maumelle HS)
No. 4 ranked player in the state of Arkansas by Prep Baseball Report … Went 4-0 during the summer while playing for the Arkansas Sticks Elite … Struck out 44 batters for a 0.42 ERA in wins over San Diego Show, Perfect Timing, Louisiana Knights, and BPA travel teams … Against the San Diego Show at the WWBA Championships in Atlanta, he struck out 12, while giving up just one hit in five innings … Participated in 2016 Area Code Underclass Games, throwing three perfect innings for the White Sox, striking out two … Plays for Barrett Davis at Maumelle.

Caden Monke | LHP | 6-3 | 165 | L/L | Mt. Olive, Ill. (Mt. Olive HS)
Ranked the No. 364 player in the nation by Perfect Game and is the No. 3 ranked player in the state of Illinois by Prep Baseball Report … Named to 2016 and 2017 Perfect Game Preseason Underclassmen All-American Teams … Played in 2017 Perfect Game National Showcase … Has seven wins and 100 strikeouts in 66.1 innings over the last three seasons at Mt. Olive High School … Had his best season as a junior, compiling a 2.62 ERA with a career-high five wins and 66 strikeouts … Named Prairie State All-Conference in 2016 and 2017 … Plays under head coach Chris Monke at Mt. Olive High School.

Steven Sanchez | LHP | 6-7 | 230 | L/L | Mundelein, Ill. (Mundelein HS)
Ranked the No. 6 player in the state of Illinois by Prep Baseball Report … Helped Mundelein High School to the Class 4A Schaumburg Supersectional … Posted a 6-1 record with 55 strikeouts in 40.1 innings for a 0.52 ERA as a junior … Plays for head coach Todd Parola at Mundelein High School.