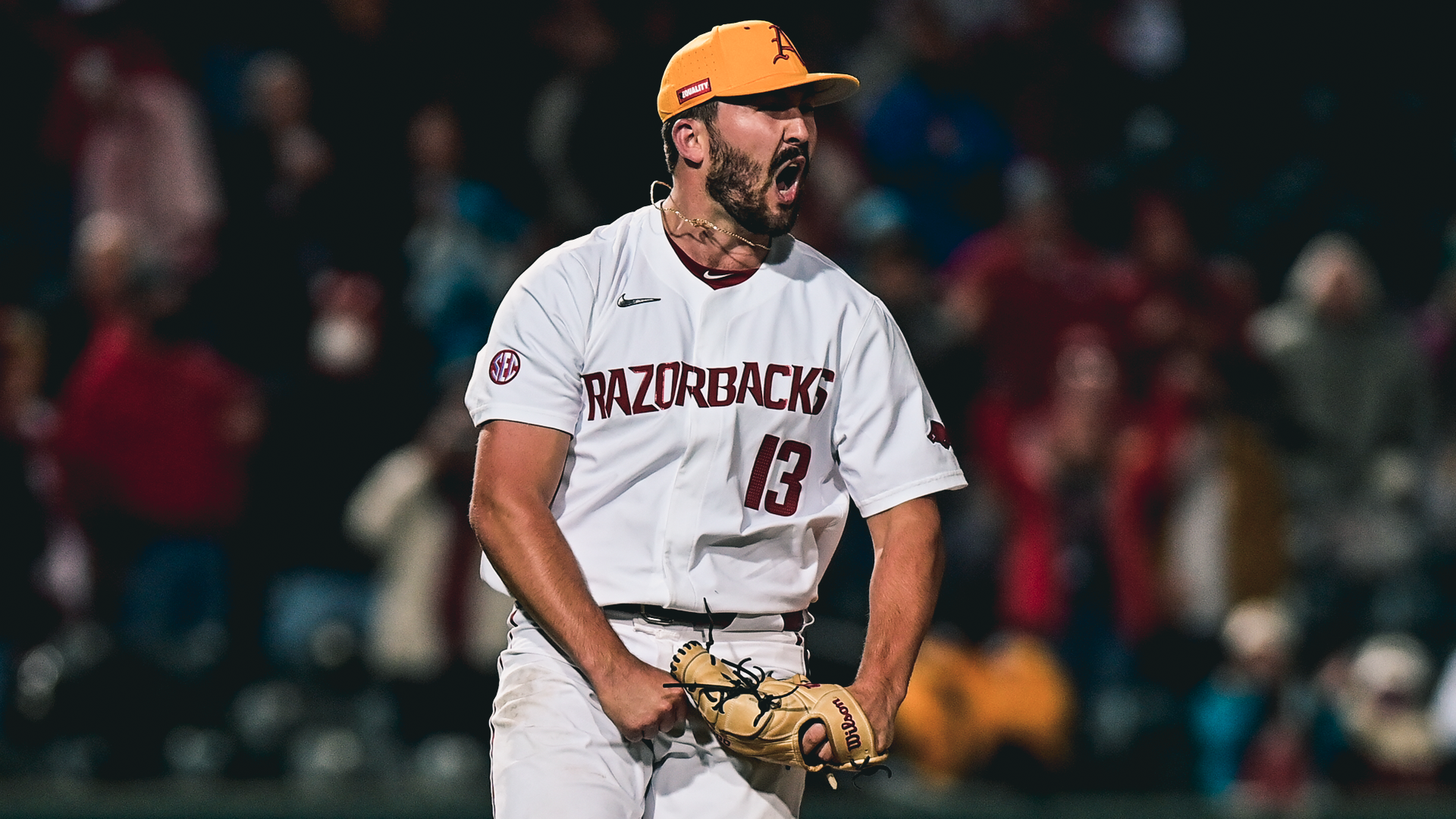 FAYETTEVILLE, Ark. – Jaxon Wiggins shined in his first collegiate start, and Cayden Wallace swatted a grand slam as the pair of true freshmen did much of the heavy lifting in No. 1 Arkansas’ 8-4 win against Arkansas State on Tuesday night at Baum-Walker Stadium.

The Hogs, now 37-9 overall on the year, completed their sweep of Natural State opponents with the win, improving to a perfect 6-0 against in-state foes this year. Arkansas picked up wins against Central Arkansas, Little Rock and UA Pine Bluff earlier in the season.

Donning gold caps to raise awareness of childhood cancer, the Razorbacks came out strong on the mound. Wiggins was sharp in his first start at Arkansas, striking out three in two scoreless innings while allowing only one hit.

The true freshman turned the ball over to Heston Tole in the third. The fellow true freshman produced more of the same, punching out one in his one clean inning.

Lael Lockhart entered in the fourth and was also unhittable. The lefty worked two frames, retiring all six he faced while collecting three strikeouts.

Arkansas’ bats, meanwhile, were silenced until the bottom of the fifth. With the game tied at zero, Wallace stepped up to the plate with the bases loaded and nobody out.

The Greenbrier, Ark., native hammered a 2-1 pitch the other way to right, launching his 10th home run of the year – and the first grand slam of his career – to put Arkansas ahead, 4-0. Christian Franklin’s RBI double later in the inning pushed the lead to five.

The Red Wolves clawed back with a run in the top of the seventh, but the Hogs responded with three more in the bottom half of the frame. Brady Slavens and Cullen Smith each collected RBI doubles in the three-run outburst.

A-State would not go quietly, however, striking for three runs of their own in the eighth. Ahead by four entering the top of the ninth, the Razorbacks called on their ninth pitcher of the night – Connor Noland – to record the ballgame’s final three outs.

The righty was exactly what Arkansas needed, striking out two of the three he faced to seal the 8-4 win.

A trip to Knoxville, Tenn., is on deck for the Razorbacks. Top-ranked Arkansas takes on No. 4 Tennessee this weekend in the penultimate three-game SEC series of the season, getting started at 5:30 p.m. Friday, May 14, on the SEC Network.