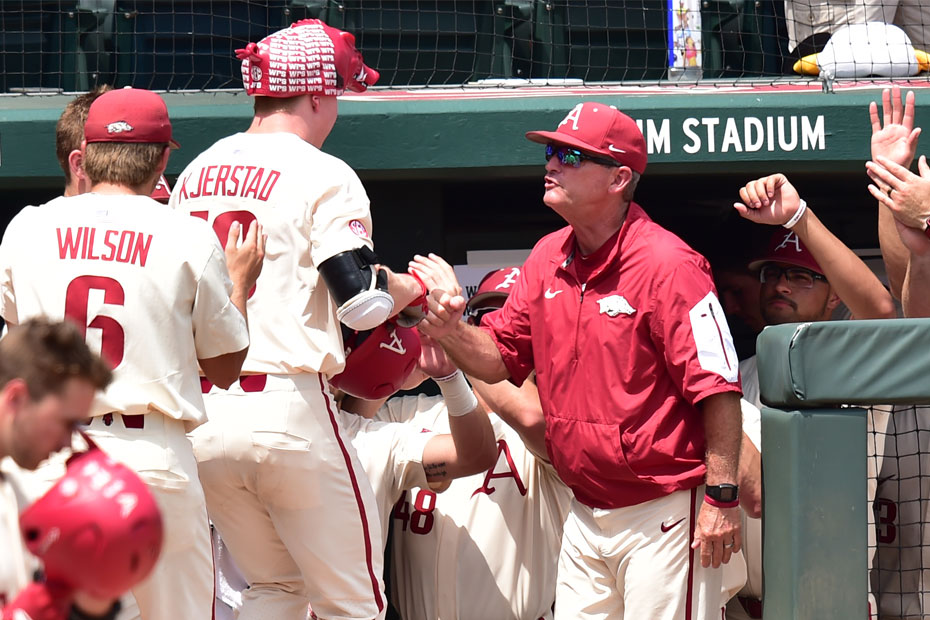 Kjerstad, who had just one hit in last week’s SEC Tournament, showed why he was picked as the SEC Freshman of the Year when he went the opposite way with home runs in the third and eighth innings, accounting for four of Arkansas’ 10 runs. He also singled in the fifth to finish 3-for-5 with two runs scored and tied a career-high with four RBIs.

On the mound, Knight had one of his best outings of the season, working an efficient eight innings on 104 pitches, while only allowing three hits, two being solo home runs, and just one walk. The victory moves Knight to 11-0 on the year, keeping him as one of only two pitchers in the SEC with 11 wins.

The win for the Hogs (40-18) is their 40th of the year, marking the 22nd season that Arkansas totaled 40 or more wins and 10th time under Dave Van Horn. It was also their fourth-straight regional opening victory, putting them into the winner’s bracket to face the winner of two-seed Southern Miss and three-seed Dallas Baptist on Saturday.

The Hitting
Of the 10 Arkansas players that made a plate appearance on Friday, all recorded at least one hit in the game with Kjerstad leading all players with three hits. As a team, Arkansas finished with 14 hits in the game, its most in an NCAA Tournament game since knocking 18 against Missouri State in the 2015 Super Regional.

Kjerstad’s multi-home run game was second of the year and gives him 13 for the season, tying him with fellow freshman Casey Martin for the team lead. He also joins Martin in good company as he has tied the Arkansas freshman record for home runs in a season last set by Zack Cox in 2009.

Along with Kjerstad’s big day, sophomore Dominic Fletcher finished 2-for-4 with two singles, his 19th multi-hit game of the year. Jax Biggers also had a two-hit day, including a two-run home run in the bottom of the sixth to finish off a four-run inning for the Hogs and up their lead over ORU to 6-1.

Since returning from his finger injury in last week’s SEC Tournament, Biggers is 5-for-10 (.500) over three games with two multi-hit games and two RBIs. The home run was his fourth of the year.

Arkansas’ other homer came at the start of the sixth inning when redshirt senior Carson Shaddy hit his 11th of the year with a solo shot into the Hog Pen. It was Shaddy’s first home run since May 11 and 10th coming at Baum Stadium.

Friday’s game against Oral Roberts was the sixth game this year that Arkansas has hit four or more home runs. As a team, the Hogs are now up to 88 for the season, which still leads the SEC and is the second most in a season in program history. Arkansas needs just four more home runs to tie the school record of 92 set in the 2010 season.

The Pitching
All of the Razorback pitching leaned on Knight, who saved the bullpen with his eight-inning outing. It was Knight’s longest outing since March 31, 2017 at Alabama and his sixth-straight start this year of six or more innings.

Knight’s only mistakes came in the fifth and seventh innings when he gave up two solo home runs to Riley Keizor, but the three hits allowed was his lowest in five appearances.

Redshirt sophomore Cody Scroggins came in to finish off the ninth inning for the Razorbacks, striking out one in his 13th appearance of the year.

Up Next
Arkansas moves on to the winner’s bracket of the Fayetteville Regional and will play the winner of Southern Miss and Dallas Baptist on Saturday at 7 p.m. A win on Saturday will put the Hogs into the regional final. All games tomorrow will be broadcast on ESPN3.