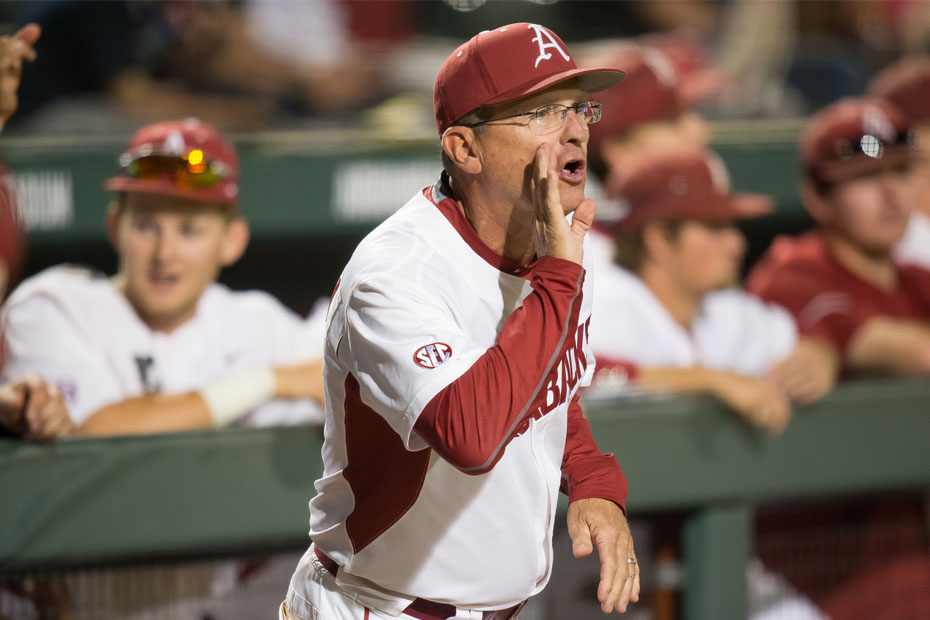 The loss for Arkansas (18-3, 3-0 SEC) snaps a seven-game win streak that dated back to March 10 in a 4-2 win over Louisiana Tech. The Razorbacks are still off to one of their best starts in school history coming out winners in 18 of their first 21 games, which is the program’s best start since 2012.

Redshirt freshman Jacob Nesbit led the team, offensively, with a 3-for-4 night at the plate, his first three-hit game of his career. Redshirt senior Trevor Ezell also turned in a two-hit game, going 2-for-3 with a run scored, but he and Nesbit were the only Razorback hitters to notch more than one hit in the game.

For Nesbit, his second-inning single extended his hit streak to a team-best 11 games. During the streak, Nesbit is hitting .471 (16-for-34) with four multi-hit games, 10 RBIs and nine runs scored. His two-out double in the top of the ninth gave the Razorbacks some renewed life, driving in Jack Kenley from first base to cut the Texas lead to 7-6.

Arkansas did get on the board early in the second inning, once again, scoring four times on three singles and a double, while also taking advantage of a Texas throwing error.

After Texas cut the lead to 4-2 in the third, Arkansas pushed ahead, again, with a run in the fourth inning off a Dominic Fletcher double, his third of the series. It was Fletcher’s only hit of the night, but his third this week.

Texas went on to score five more runs in the fourth, fifth and sixth innings as Arkansas pitching struggled to find command. Eight different Razorback pitchers entered the game Wednesday night. Redshirt sophomore Marshall Denton got his second-consecutive start and held the Longhorns scoreless for the first two innings. After him, the staff wasn’t able to get things under control until the final two innings where the combo of Caden Monke, Carter Sells and Collin Taylor held Texas hitless, even while issuing seven walks.

“I liked what I saw from our team. I didn’t play a couple of our starters and I threw a bunch of young kids today and we still had a chance to win the game. So that makes me feel pretty good about some of these players.    There were some good things in there with a couple of our pitchers. But for the most part they struggled with command. We walked them and we hit ‘em and that’s why they beat us.” – Dave Van Horn on Wednesday’s game

Up Next
Arkansas continues its road trip to Tuscaloosa, Alabama this weekend as SEC play continues against Alabama starting on Friday at 6 p.m. All three games this weekend will be broadcast on SEC Network+.