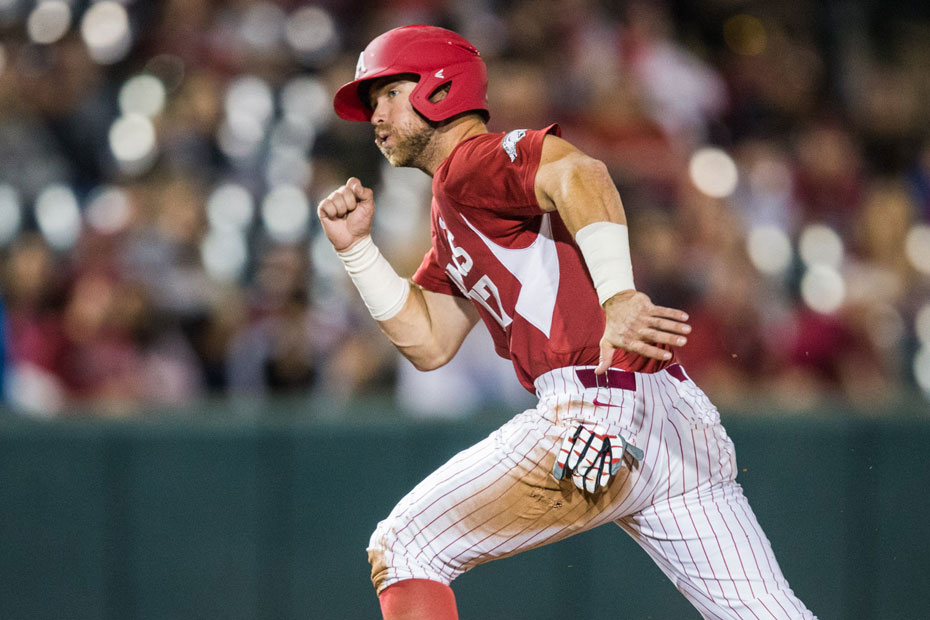 COLUMBIA, Mo. – 24th-ranked Arkansas and 18th-ranked Missouri battled through some bad weather Saturday afternoon at Taylor Stadium. Both teams were in a 1-1 stalemate after five innings, but the Tigers scored six runs during a rainy sixth from three home runs, which led to giving the Hogs their first conference loss of the year, 7-2, evening up the three-game series.

Five of Missouri’s six runs in the sixth came off the home run, as the Tigers clubbed three long balls in the game, two off Arkansas starting pitcher Trevor Stephan. The junior’s outing started out like many of his previous starts as he had just given up the one run in the first and held Missouri to just three hits through the first five innings.

Heavy rain began to fall at the beginning of the sixth inning, but play never stopped. The weather coupled with the two Tiger home runs were Stephan’s undoing. He finished with 5.1 innings pitched, four earned runs allowed, one walk, and 10 strikeouts.

Saturday’s game was his second outing this year with 10 or more strikeouts, the other being his career-high 13-strikeout performance against Rhode Island, but the four earned runs were also season high.

Kacey Murphy and Jake Reindl came out of the the bullpen to pitch the remainder of the game starting in the sixth inning. Murphy faced four batters and gave up three earned runs including a home run. Reindl relieved him in the same inning.

Reindl did a great job at keeping the deficit from increasing as he struck out four over 2.2 innings and allowed just two hits. It was his longest outing of the year and the four strikeouts was a career-high.

As for the offense, Arkansas finished with eight hits as a team, five coming from the bats of juniors Luke Bonfield and Carson Shaddy.

Bonfield went 3-for-3 at the plate with a run scored, while Shaddy went 2-for-4 with an RBI. Bonfield continues to lead the team with 10 multi-hit games this season. Saturday’s game was his third three-hit game of the year, which leads all Razorbacks.

Junior Chad Spanberger slugged his fourth home run of the year in the top of the third inning tying the game at 1-1. Spanberger has been strong at the plate as of late. After going 2-for-4 with a run and an RBI today, Spanberger has recorded back-to-back multi-hit games and has six multi-hit games this year. In his last seven games, he is hitting .276 with three home runs and 10 RBIs.

Down 7-1, the Hogs tried to mount a rally in the top of the eighth inning, getting an RBI double from Shaddy, his second straight game with a two-bagger. Unfortunately, Missouri reliever T.J. Sikkema closed out the final four innings for the Tigers, picking up his fifth win of the year.

Up Next
Arkansas and Missouri will play the rubber match of this series on Sunday with first pitch slated for 1 p.m. at Taylor Stadium. Right-hander Josh Alberius will take the mound for the Razorbacks and Andy Toelken will pitch for Missouri.

The game will be broadcast online only on SEC Network+. It can also be heard on the Razorback Sports Network with Phil Elson on the call.