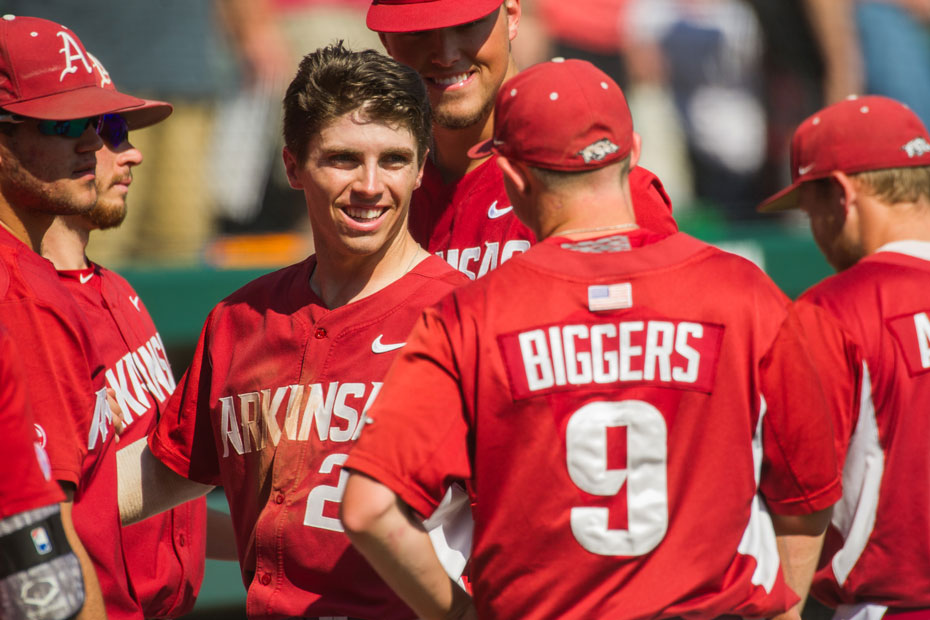 FAYETTEVILLE, Ark. – With a major series win over Missouri and now 20 victories on the year, Arkansas found itself ranked in all national college baseball polls on Monday, its’ highest at No. 17 in the Collegiate Baseball Magazine poll.

The Razorbacks were not ranked last week in any national poll except at No. 24 in the Perfect Game poll, but after taking two games from a Missouri team that had won 20 straight prior to playing the Hogs, they have surged into the top-20 in four of the national polls.

Arkansas is ranked No. 20 in this week’s Perfect Game, D1Baseball.com and USA Today/ESPN poll, while checking in at No. 21 in this week’s Baseball America poll, its first ranking by the publication this season.

The Hogs also saw a huge jump in its Ratings Percentage Index ranking after a 3-1 week against New Orleans and Missouri. Up 26 spots, Arkansas is now No. 27 in country by the RPI, the sixth-highest team from the Southeastern Conference.

At 20-5 on the year, Arkansas currently holds the best record in the SEC and is tied for the lead in the Western Division with Auburn. It’s the fastest the Hogs have reached the 20-win plateau since the 2012 team achieved 20 wins in 22 games and matches the numbers of conference series victories from a year ago.

As winners of 12 of their last 14 games, the Razorbacks can contribute a lot of those wins to strong pitching, but the offense hasn’t slowed down either. Over the four games last week, Arkansas hitters hit six home runs, upping its combined total to 36 for the season. That total still leads the SEC and is good for eighth in the nation.

Catcher Grant Koch leads all Hog hitters with eight long balls and is tied for the overall SEC lead with LSU’s Greg Deichmann and Mississippi State’s Brent Rooker. He’s one of four players hitting over .300 and one of six with three or more home runs on the year.

Freshman Dominic Fletcher and junior Carson Shaddy aren’t far behind Koch with six home runs of their own. Arkansas is the only team in the SEC with more than one player with five or more home runs so far this season.

Arkansas is home for a single midweek game on Wednesday against Grambling State before hitting the road again to face Alabama in Tuscaloosa for a three-game set starting on Friday.

Saturday’s and Sunday’s final two games of the series will be on the SEC Network with first pitches set for 7 p.m. and 3 p.m., respectively.

A full roundup of where the Razorbacks rank in the national polls is listed below. To see the full poll, click the name of the publication you would like to see.