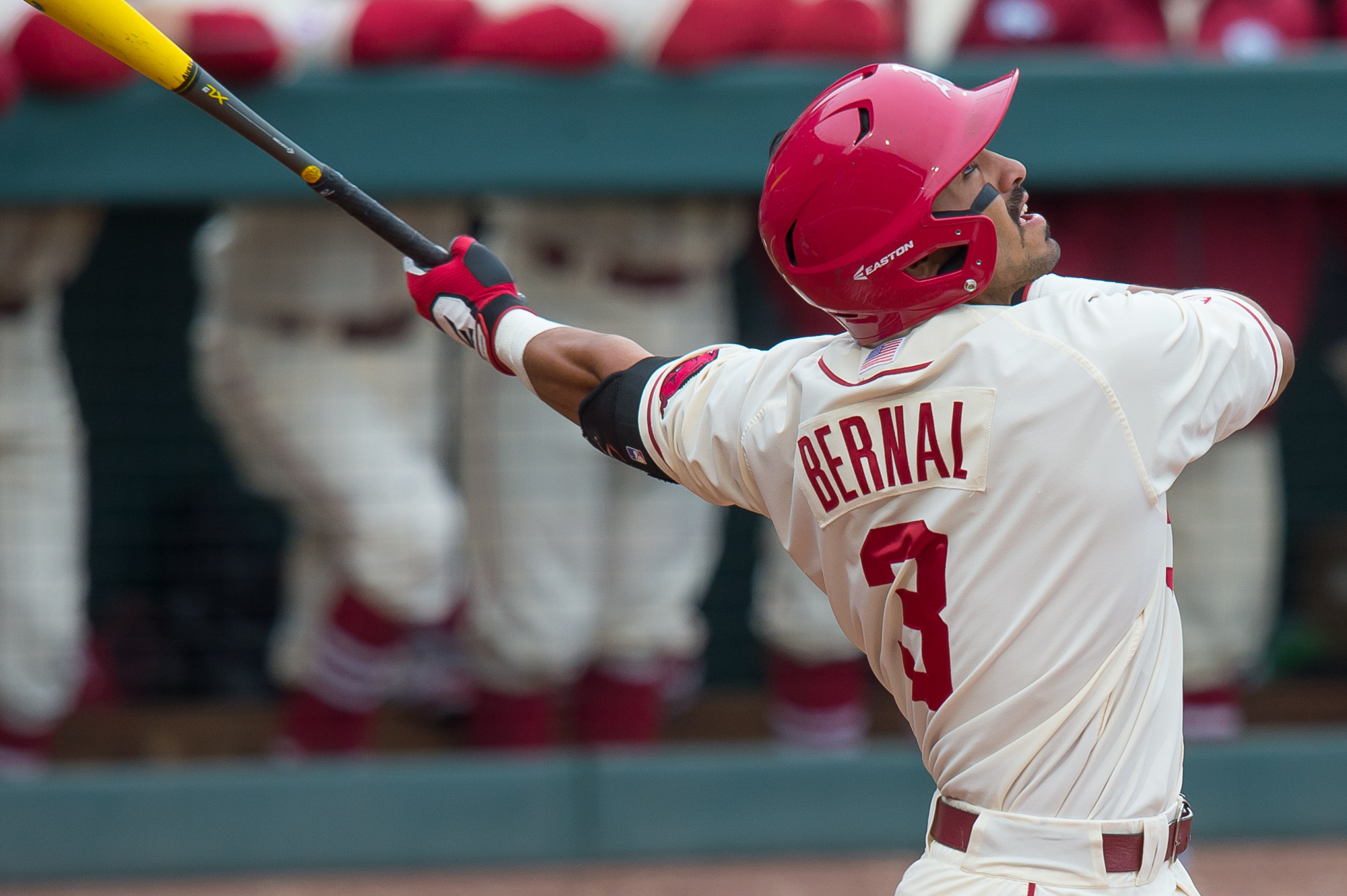 FAYETTEVILLE, Ark. – Senior Michael Bernal provided the heroics again Sunday afternoon, driving in all three of Arkansas’s runs in the seventh and eighth innings to help complete the sweep of Auburn, winning 3-1 at Baum Stadium. Arkansas (18-6, 3-3 SEC), which was coming off a sweep of their own at the hands of South Carolina, evened things back up in conference play with Sunday’s win and earned their first sweep of a conference team at home since 2012.

For Bernal, the shortstop went 2-for-4 at the plate, both hits coming in the seventh and eighth innings to finally put Arkansas on the board after Auburn (11-13, 1-5 SEC) starting pitcher Cole Lipscomb held the Hogs in check for six innings.

Along with Bernal, both Cullen Gassaway and Rick Nomura turned in two-hit days, both going 2-for-4 with Nomura scoring two of Arkansas’s three runs.

As a team this weekend, the Razorbacks batted .294 with 20 runs scored and four home runs. Bernal, Nomura and Carson Shaddy all batted .400 or higher over the three-game stretch with Bernal taking home the high honors of a .455 average with five hits, two home runs, seven RBI and an even 1.000 slugging percentage.

Arkansas closer Zach Jackson got the win, moving his record to 2-2 on the year, but the win could be credited to the whole pitching staff along with starter Barrett Loseke, Jordan Rodriguez and Doug Willey, which gave up just seven hits over 6.2 innings and just one earned run, while striking out seven before Jackson took the hill.

Loseke, who was making his third start of the year, only lasted 2.2 innings, but still pitched a solid game, scattering four hits and giving up the one run off a homer from Jackson Burgreen in the third inning.

Jackson came in to pitch in the middle of the sixth inning after Willey put two runners aboard with two outs and the team still trailing 1-0. Needing a big out to end the threat, Jackson got the groundout of Jordan Ebert to end the inning and he went on to limit Auburn to just three hits the rest of the way, stranding four base runners.

Arkansas’s pitching was much more solid this week against Auburn than what was seen last week at South Carolina. The combined ERA of the Hog hurlers for this week was 3.33, a near five-run improvement from last week against the Gamecocks (8.62), striking out 25 batters and giving up just 10 earned runs.

Even though both Auburn and Arkansas stayed almost even in hits for the series (Arkansas 30, Auburn 31), the Hog pitchers worked out of multiple jams forcing the Tigers to leave 38 runners on base throughout the series.

The Razorback offense only managed one hit through the first six innings, but finally got to Lipscomb in the seventh after Rick Nomura and Luke Bonfield both led off the frame with singles, forcing Auburn to go to the bullpen with only a 1-0 lead.

After Lipscomb was pulled, Ben Braymer came on to pitch for the Tigers with two men on base and nobody out. Braymer walked Chad Spanberger to load the bases, bringing up Bernal with a huge RBI opportunity and the go-ahead run on second.

Bernal battled through a 10-pitch at-bat before finally connecting on one in play, sending a high fly ball to straight-away centerfield. The ball was able to drop after some Auburn miscommunication, bringing in Nomura to tie the game at 1-1. Arkansas wasn’t able to add to the one run, popping out in two-straight at-bats and then grounding out to end the threat.

In the eighth inning, Arkansas, again, got off to a good start at the plate as Auburn went to the bullpen for the second time and brought in Izaac Yarbrough. Yarbrough started the inning off with a fly out, but then gave up singles to Cullen Gassaway and Nomura before walking Bonfield, allowing Arkansas to load the bases for the second-straight inning.

Spanberger grounded to first base as Auburn took the force out at home to get the second out of the inning, but it allowed Bernal to come back to bat in the same situation with another opportunity to give Arkansas the go-ahead run.

Auburn went to the bullpen again and brought in Gabe Klobosits, but the change in arms didn’t affect Bernal anyway. The El Paso, Texas-native came through with a single to left field, bringing home Nomura and Bonfield and pushing the Hogs ahead 3-1, which ended up being the winning runs.

Arkansas takes a break from the conference season to dip back into non-conference play as it will travel to Stillwater, Okla., on Tuesday to face No. 19 Oklahoma State at Allie P. Reynolds Stadium, the same site that Arkansas clinched a spot in the NCAA Super Regionals last year. First pitch is slated for 6 p.m. and will be televised online on Fox Sports-Plus.

“Just a great job by our team hanging in there. The bullpen did a tremendous job. We weren’t doing too much offensively, obviously. (Cole) Lipscomb kept us down, we didn’t do much against him. We got people on base and it seemed like he got better. He pitched like the veteran he is and he knew how badly his team needed to win. He gave them a great opportunity to win, but then our bullpen came in and did a tremendous job. I thought Barrett Loseke did a very nice job for us. At the most, we were hoping we could just get four innings out of him, he is a freshman and they have a really good lineup. I think they had five left-handed hitters in the lineup and he is a right-handed pitcher. The wind was blowing out to right, and he gave us three innings. (Jordan) Rodriguez came in there and got us through that third inning and through the fourth. Then, we went to Doug Willey and I thought he threw tremendous. One inning, he got three groundballs by three left-handed hitters to second base; that was big for us to see. He has always been really tough on the righties but to show us he can get the lefties out was big. The downfall for us in the game is just that we didn’t drive anybody in. We could have blown it open and we finally got the big hit by Bernal.” – Dave Van Horn’s opening statement

“Anytime you win, you start getting a good feeling and a good vibe going where you feel like you are going to win. This is such a mental game. You have to feel good about it and you have to feel confident and good things usually start happening. It’s hard to hit, pitch and field if you’re nervous; you just have to be loose. I think they have kind of figured out that you can be serious, but you can be loose at the same time. I feel like we have turned the corner mentally.” – Dave Van Horn on what the sweep does for confidence.

“Bases were loaded and I knew he didn’t have anywhere to put me, so I knew he was going to have to throw strikes and come over the plate. I didn’t think his breaking ball was anything to beat me, so I was just working on the fastball. If I saw a breaking ball, I was just going to go ahead and let it go until I got to two strikes. At that point, I was down in the count so I had to keep fouling those pitches off; they were all fastballs. I just knew he had to throw strikes so I was doing what I could to find a pitch to get the job done with. The one I did put in play wasn’t textbook, but it got the job done.” – Michael Bernal on his 10 pitch at-bat that tied the game in the seventh inning.

“It was a ball in the middle half of the plate. That guy (Gabe Klobosits) came in and threw against us Friday. I saw him really well after I hit a ball hard to centerfield on Friday. I was feeling good about that at-bat. It was the same situation, bases were loaded, nowhere to put me so I was just going to go up there and be aggressive and try to find a pitch over the plate.” – Michael Bernal on his two-run single in the eighth to take the lead.

“After getting swept last week, you look at it from league play and we are sitting .500 now. These kind of cancel each other out, lose an away series and win a home series; kind of what everyone is expected to do all year. Sitting back at .500 is huge.” – Zach Jackson on getting the sweep.

“It was huge. You look at a guy like Jordan Rodriguez, he has kind of almost become our guy to bring in after that starter especially against lefties. A guy who started off the year a little slow then every chance he has had since then, he has been dominant. Coming in there and filling it up, especially throwing as much as he did Friday is real big for us. Doug (Willey) just doing what we know he can and finally getting his chance today to show what he has been doing all year. That middle relief can kind of go unnoticed but it is huge.” – Zach Jackson on the middle relief.