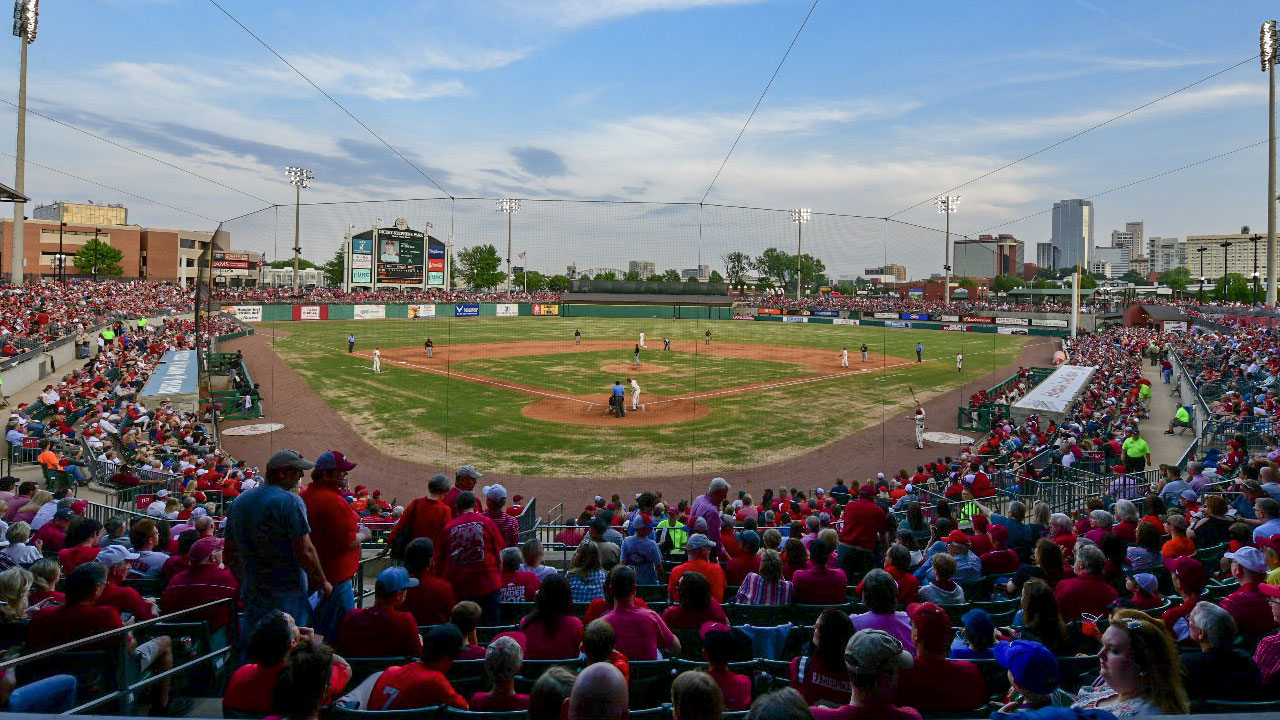 Razorbacks Take Care Of Grambling In Front of Big Crowd

NORTH LITTLE ROCK, Ark. – A near-record crowd of 10,463 were on hand to see the fifth-ranked Arkansas Razorbacks take on Grambling State Tuesday night in Dickey-Stephens Park. Those fans were treated to an offensive showing as the Hogs pounded out 17 runs on 15 hits to defeat Grambling, 17-3, in their final non-conference game of the season.

The 17 runs scored by Arkansas (35-11) is the largest run output by the Hogs in 10 games played at Dickey Stephens Park since 2010 and is the second-most runs scored in a game this year.

Redshirt senior Trevor Ezell went 3-for-3 in the game with three RBIs and three walks. It was his 16th multi-hit game of the season and eighth three-hit game. He also tied the school record for runs scored in a game by crossing the plate six times, tying him with Jeremy Jackson and Todd Zacher, who each scored six runs in a game in 1997 and 1981, respectively.

Ezell was one of five Razorbacks to record a multi-hit game on Tuesday. Casey Martin, Heston Kjerstad, Dominic Fletcher and Curtis Washington, Jr. all reached via hit twice in the game. Martin led all RBI totals as he drove in four, two off an inside-the-park home run in the fourth inning. It was Martin’s fourth game of four or more RBIs this year.

After a shaky first inning, sophomore Kole Ramage settled in and looked good for four innings, giving up only two earned runs and scattering five hits, while striking out a career-high seven on 86 pitches. He was followed by Marshall Denton, Elijah Trest, Collin Taylor and Jacob Burton for the final five innings. The four-pitcher combo allowed just one hit the rest of the way and struck out a combined eight.

Six-Run First Inning Sets Tone
Grambling State had taken a one-run lead going into the bottom of the first inning, but the Razorback offense took back that lead pretty quickly in the bottom half. Arkansas batted around to score six runs on just two hits as Grambling starter D’Quan Matthews struggled with command, walking three and making it just 0.1 innings with four runs allowed on no hits. Arkansas didn’t get its first hit until Jordan McFarland hit a slow roller down the third-base line that he beat to first. Zack Plunkett followed with a blast into the left field berm for a three-run home run.

Martin Races Around For Inside-The-Park Home Run
Sophomore Casey Martin tried to leg out a triple in the second inning after knocking a hit down the third-base line, but was thrown out at third base on a good throw from the outfield. In his next at-bat in the fourth inning, he made sure he not only made it to third, but got a little extra. Martin smashed an easy triple to right-centerfield gap and never stopped running, scoring standing up for his second inside-the-park home run this year. His last one came on March 10 against Louisiana Tech and he now has 10 home runs for the season, three in his last eight games.

Razorback Quotables
“Casey’s (Martin) done a really good job the last two weeks of raising his batting average because he’s hitting the ball the other way. He’s staying through the middle of the field and that ball was really hit hard to right center.” – Head coach Dave Van Horn on Casey Martin’s approach as of late and his inside-the-park home run

“Just trying to hit the other way and take the ball the other way. They’ve been throwing a lot outside and I really struggled with that last year. I’m kind of taking that approach now.” – Casey Martin on what he’s done differently with his approach

“It’s definitely fun to be back in this kind of atmosphere, especially with a lot of fans that don’t get to come out. It kind of gives them a chance to come out here and watch. It’s definitely fun. It gets me excited.” – Casey Martin on getting to play close to home (Lonoke, Ark.)

“It’s good to be back close to home where I graduated high school. I had a lot of friends in the stands, so it was good to see some of them.” – Trevor Ezell on getting to play close to hometown (Bryant, Ark.)

“I think it’s a great spot. We’re approaching the end of SEC play and we’re hot. There’s no reason… We feel like we can carry that out through the rest of the season.” – Trevor Ezell on if the team might be peaking too early

Up Next
Arkansas heads to Lexington, Kentucky and will start a three-game series with the Kentucky Wildcats on Friday at Kentucky Proud Park. First pitch is slated for 5:30 p.m. CT on SEC Network+.