Razorbacks history at the U.S. Olympic Trials in track and field began in 1924 when Herman Bagby competed in the decathlon, earning selection to the meet after winning a district decathlon in Kansas.

While Clyde “Smackover” Scott became the first Razorback to earn an Olympic track and field medal, with silver in the 110 hurdles, after placing third in the 110 hurdles at the 1948 Olympic Trials, Bagby traveled to Paris for the 1924 Olympics as an alternate following his sophomore season at Arkansas.

Bagby, of Lake Village, Arkansas, returned from his journey to France and led the Razorbacks in scoring during the 1924 football season, compiling 72 points and earning all-conference honors at halfback. An article noted his “work at all times has been brilliant and depending upon amazing speed he made many long runs during the season.”

Bagby, who lettered in track and field in 1924, was introduced in a newspaper preview for a meet against Oklahoma with the following note:

“In Herman Bagby, the Razorbacks have a man who looks like a whole track team in action, reports from Arkansas say. Bagby is credited with being the fastest sprinter in the state of Arkansas. In addition, he throws the javelin, puts the shot, runs the low hurdles and stars in the pole vault.”

The 1924 Olympic Trials were held in Cambridge, Massachusetts, but the decathlon was staged at Columbia University in Southfield, New York, and the normal two-day competition was completed in one day, June 11, starting at 10 a.m. and finishing after 8 p.m.

Back then the top four finishers qualified for the U.S. Olympic team and competition for the fourth-place position was “unusually keen” as only 26 points separated four men placing fourth through seventh.

Decathlon scoring at that stage produced points based on how an individual’s performance compared to the current world record for each specific event.

The Trials 100 meet record was equaled again in 1928 and then bettered in 1936 with a pair of 10.7s by Glenn Morris and Robert Clark, who finished first and second in the Trials and repeated that order for Olympic gold and silver.

As the United States Olympic team set sail to France from New York on June 16, Bagby was among a group of alternates added to the roster of 320 athletes aboard the liner called America, which included a cork linoleum track stretched from stem to stern on the starboard side of the promenade deck and a heavy mat decorated the bow for the daily rehearsals of the weight men.

A tendon injury during a pole vault practice session limited Anderson, who ran 11.8 in the 100 but didn’t register a mark in the long jump. He was among 11 athletes who did not finish the competition.

Prior to competing in New York, Bagby won a district Olympic Trials tryout decathlon held May 29-30 in Lawrence, Kansas, with a score of 6943.20, earning a selection to the Olympic Trials competition.

Bagby held a scant one-point edge over John Levi of the Haskell Institute heading into the final event and produced a lead of 129.51 points after the 1,500 for the victory.

Also competing in Lawrence was Razorback sophomore Glenn Musselman, the Southwest Conference champion at two miles, who ran a solo 3,000m race, posting a time of 9:22.2.

During the conference meet Musselman provided the biggest upset in defeating the defending two-mile champion in Texas senior Johnny Trout, and improved Trout’s meet record by 10 seconds with a clocking of 9:49.3.

An article covering the meet had the following note after describing Musselman’s victory:

“After beating Trout, Musselman pulled on his sweat-shirt and broke into a gallop back to the Arkansas bench apparently fit for another two-mile race.”

Bagby finished second in both the 100y and 220y at the conference meet.

The NCAA Championships, which started in 1921 for track and field, didn’t take place in 1924 since the dates conflicted with the Olympic Trials. Even if they had held an NCAA meet, the decathlon wasn’t contested in the NCAA Championships until 1970. 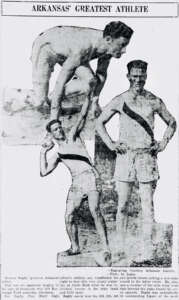 Known as the “Arkansas flyer” while competing in football and track at Pine Bluff High School, Bagby was very appreciated by his community as described in the following excerpt.

“To show appreciation for the remarkable work of Herman Bagby on both football field and cinder track, citizens of Pine Bluff will observe Bagby Day at Athletic Field and witness the star in action in three special events – 100y, 220y, and mile relay – in which Pine Bluff, Little Rock and Memphis Central High Schools have been entered.

“A committee of citizens completed arrangements to assure Bagby a college education on behalf of the advertising he has given Pine Bluff. This, no doubt, he has done. Bagby is hailed as the greatest high school athlete since Russell May, the outstanding figure in the history of Arkansas athletics.”

This proclamation of a Bagby Day followed his recent feats at the 1922 Arkansas state meet in Little Rock, where Bagby ran nine races during the day and won them all, which included the 100, 220, 440 and mile relay. He also competed in three field events, setting a state record in winning the javelin, which he only started throwing two weeks prior.