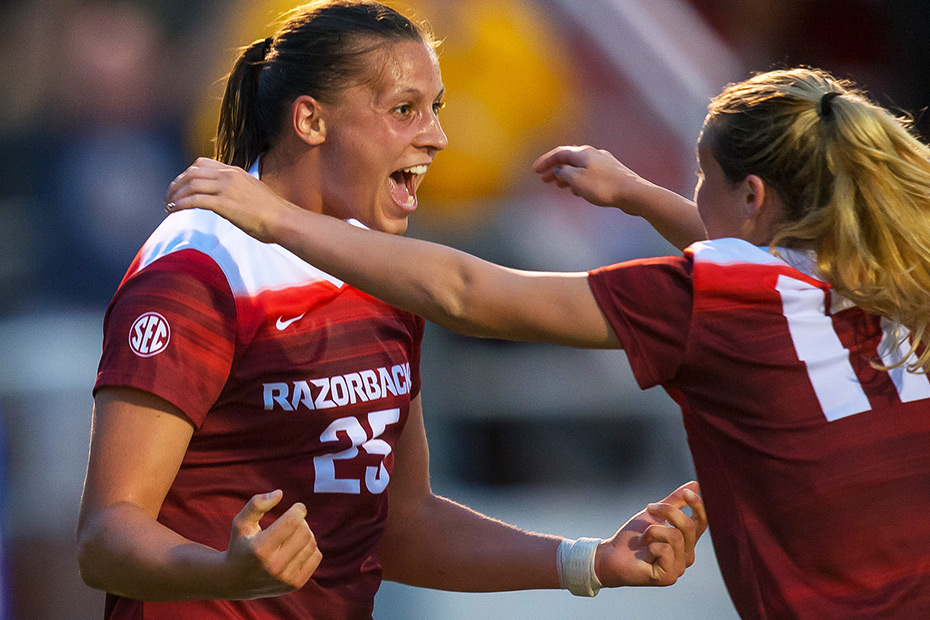 FAYETTEVILLE, Ark. – Arkansas defeated the No. 2 Duke Blue Devils 2-1 Friday night at Razorback Field in front of a record-setting crowd to improve to 3-0 for the year.

The win was the program’s first victory against a top-10 opponent and the highest-ranked team to visit Fayetteville since 2012.

Arkansas struck first, scoring against the 2015 national champion runner up in the 20th minute after senior Lindsey Mayo’s strike hit the back of the net to give Arkansas a 1-0 lead. Mayo was assisted by seniors Claire Kelley and Sparky Fischer.

The Razorbacks pulled ahead to a 2-0 lead after freshman midfielder Stefani Doyle scored an unassisted goal late in the 49th minute. The score was Doyle’s fourth goal in three games.

Duke freshman midfielder Olivia Erlbeck scored unassisted in the 75th minute of play to narrow Arkansas’ lead to 2-1, but the Razorbacks would play out the final minutes to seal the win and remain undefeated.

“First off, thanks to the best fans in America. We knew coming in how special some of Duke’s players were but they hadn’t really been through anything yet. They’d been cruising,” Arkansas head soccer coach Colby Hale said. “We had been through some stuff and felt prepared to handle whatever the match brought. Our kids’ fight was fantastic. They executed the game plan to perfection. What a great win. We will celebrate tonight and prepare for a very good UMKC team tomorrow.”

Despite scattered rainstorms earlier in the day, Razorback fans came out in record numbers as the weather cleared up and helped the team break its single-game home attendance record for the third year in a row.

Friday night’s official attendance mark of 3,010 fans topped the previous record set in 2015 against TCU by more than 29 percent.

The Razorbacks will seek a 4-0 mark Monday night in its second home game of the season against UMKC. Kickoff will be at 6 p.m. and the game will be streamed online via SEC Network+.