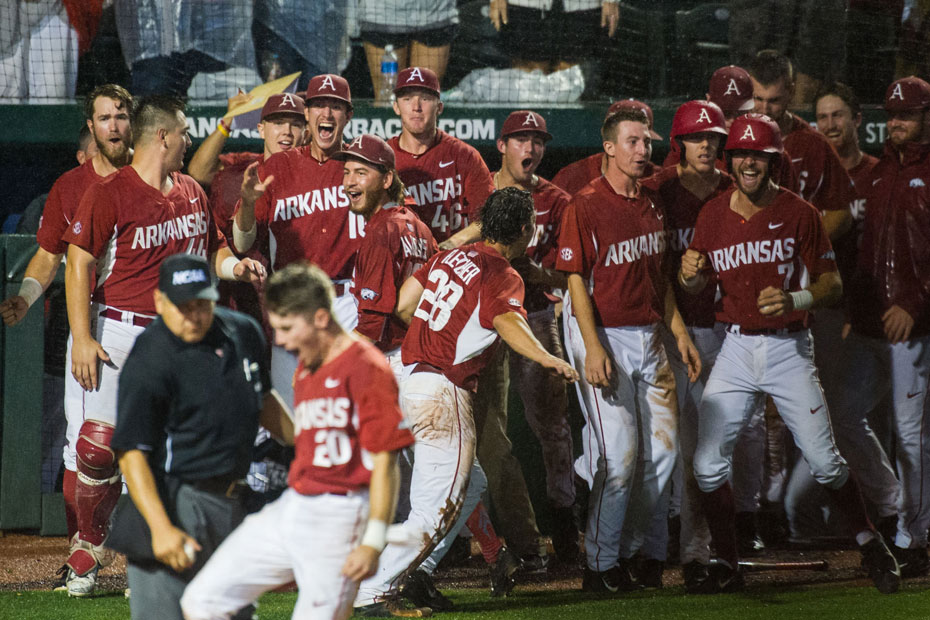 FAYETTEVILLE, Ark. — With six hours in between the first pitch and the last pitch of Sunday’s regional final between No. 11 Arkansas and No. 21 Missouri State among numerous lead changes and weather delays, it was the Razorbacks that came out on top, 11-10, to force a regional-deciding game on Monday at Baum Stadium.

Just before 3 a.m., sophomore Jared Gates provided the exclamation point in the eighth inning with his two-run home run that sent the remaining Arkansas fans to its loudest decibel of the night. Arkansas had taken the lead earlier in the inning on an RBI groundout by Jax Biggers and then a wild pitch that scored Dominic Fletcher.

Gates hadn’t homered since April 27 against Ole Miss, but couldn’t have broken the homerless streak in a better way, sending his fifth long ball of the year into the visitors bullpen to give Arkansas the 11-8 lead. The home run was his only hit of the game in five at-bats.

Missouri State nearly forced the game even further in the ninth when Hunter Steinmetz hit a two-run home run with two outs off Jake Reindl. Clinging to a one-run lead, head coach Dave Van Horn brought in freshman Evan Lee, seemingly, the last remaining arm, to get the final out.

Lee got the job done striking out Justin Paulsen to end the marathon and earn his second one-out save of the year.

The Hogs’ day was already long after it beat Oral Roberts in an elimination game earlier in the day to advance to the regional final against the Bears. However, with the late start to its game with ORU, the game with Missouri State did not begin until just after 9 p.m.

A combined 21 runs were scored in the game on 27 hits with four errors between both clubs. Four different Razorbacks recorded multi-hit games and Gates was one of three players with two or more RBIs.

Jax Biggers turned in a 2-for-3 (.750) game with a game-high three RBIs. Two of his RBIs came as part of Arkansas’ three-run first inning that got things going.

Eric Cole joined Gates and Biggers with two RBIs in the game. His RBI single in the second and sacrifice fly in the third turned out to be big runs for the Hogs as the game went on. Cole has turned in a nice regional performance this weekend. The sophomore only has four hits in 17 at-bats (.235), but leads the team with five RBIs over the last four games.

The Hogs used eight pitchers in the game as Jake Reindl earned the win, his fourth of the year. Jake Fromson was saddled with the loss for Missouri State after throwing the wild pitch that scored Fletcher in the eighth inning.

Arkansas 4, Oral Roberts 3 (ORU eliminated)
Chad Spanberger’s monstrous home run in the seventh inning was the final blow Arkansas needed to outlast Oral Roberts Sunday afternoon, winning an elimination game, 4-3, at Baum Stadium. Both teams utilized three-run innings early on and were tied going into the seventh before Spanberger’s 20th home run of the season broke the tie and sent the Hogs to the regional final.

Arkansas, which came into the regional with an SEC-leading 80 home runs on the year, had yet to send a ball over the fence this weekend. Spanberger changed that with one swing, launching a ball well past the scoreboard in right field to put the Hogs ahead by one.

Spanberger, who was coming off a five home run week at the SEC Tournament, was 3-for-6 in the regional, but just had one RBI and one double to his credit. Spanberger joins Ryan Lundquist (24), Brett Eibner (22), Danny Hamblin (22), Rodney Nye (20), and Andrew Benintendi as the only players in program history with 20 or more home runs in a season.

ORU led early with the help of back-to-back home runs in the fourth inning by Noah Cummings and Brent Williams. The Golden Eagles scored an additional run after Murphy was relieved in the same inning to take a 3-0 lead.

The Razorbacks went to work in the next half inning, scoring three runs of their own on the strength of five-straight hits, including doubles by Dominic Fletcher and Eric Cole. For Cole, his double counted for two of the three runs in the inning, while Fletcher’s was his second RBI double of the regional.

Razorback Quotables
“It was the day. It wasn’t just this game. I’ve been involved in some crazy games – 17‐16 … maybe 1‐0. I remember we beat Rice on a Saturday in 2012 when Ryan Stanek held them down. Obviously, we ended up in the Super Regional and won it. It’ll be one that I’ll never forget. I told the players in the outfield, I hadn’t been up this late in years, so this was kind of interesting. But yeah, what a day. Crazy.” – Head coach Dave Van Horn on staving off elimination twice and playing into the early morning

“That was one of the craziest games I’ve ever been a part of. It was a see-saw, back and forth. No team was really out of it, so to speak. It was crazy. The fans made it awesome, too, hanging in there until 3 a.m. It was awesome.” – Jared Gates on the craziness of the game

Up Next
Arkansas will face two-seed Missouri State for the third time this weekend in a regional-deciding game on Monday at Baum Stadium. First pitch is set for 6 p.m. and will be broadcast on ESPN3.