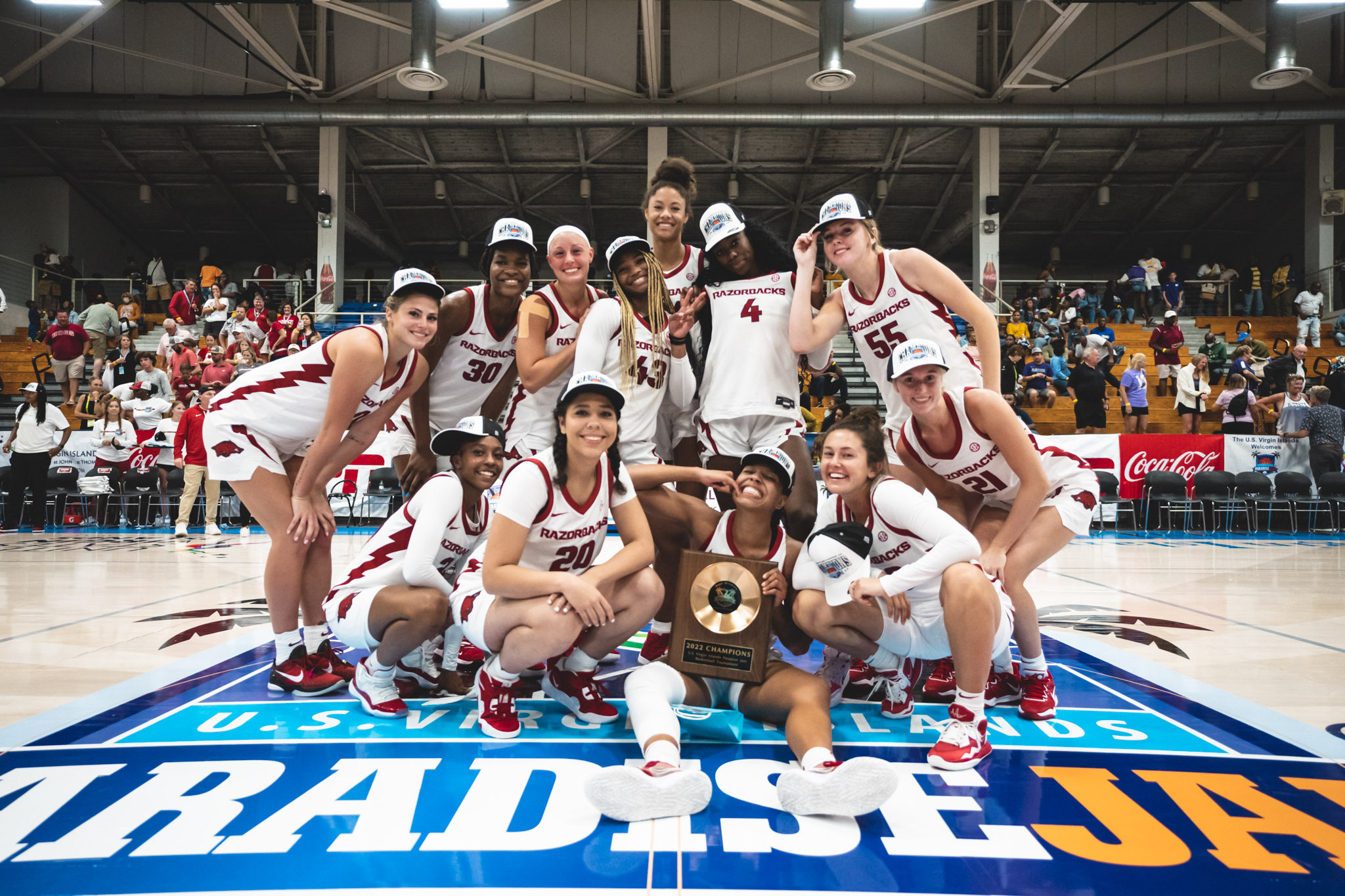 ST. THOMAS, USVI – Arkansas women’s basketball (8-0) is coming back to Fayetteville with the Paradise Jam Reef Tournament Championship and three more wins, highlighted by the Razorbacks’ 69-53 victory over No. 25 Kansas State (7-1). The victory on Saturday night handed the Wildcats their first loss of the season. Chrissy Carr paced the Razorbacks against her former team with 19 points and earned a spot on the five-person All-Tournament Team. Makayla Daniels logged 13 points and six boards and won the tournament’s MVP honors after averaging 17.3 points, 5.7 rebounds, 2.7 assists and 2.0 steals over the week.

Kansas State scored the first two baskets of the game, but Erynn Barnum got the Razorbacks going with a layup. Saylor Poffenbarger made a tough layup and followed that up by making one of two free throws, as Arkansas trailed at the media timeout, 6-5. Barnum tied the game at six with a free throw, but K-State responded with a 3-pointer. After that triple, the lead changed twice until the contest was knotted up back at 13 with a little over a minute left. Daniels got fouled with three seconds left and was sent to the line, knocking down both free throws. Arkansas led 15-13 after one quarter.

Arkansas kept the momentum rolling in the opening minutes of the second quarter, charging on a 6-0 run. K-State cut the lead to three, 21-18, off a 3-pointer, but the Razorbacks scored nine straight points, including a 3-pointer from Carr, as Arkansas led, 30-18 with 2:48 left in the quarter. The Wildcats cut the Razorback advantage to 10 with less than a minute left, but Daniels drove to the basket for a layup and got fouled in the process with a second left on the clock. She made the free throw to send Arkansas ahead, 38-26 at the half. Barnum logged 13 of her 17 total points in the second frame.

Carr buried a 3-pointer to begin the third quarter and extend the Razorback lead to 15. That 3-pointer sparked an 8-2 run and after a Daniels 3-pointer, K-State called a timeout. The 3-pointers kept falling, as Daniels knocked down another one and after Maryam Dauda had one of her own, Arkansas pulled ahead 52-33 with 4:42 left in the third. K-State could not find an answer for Carr, as another triple extended the lead to 22. Arkansas outscored K-State 24-15 in the third and entered the final quarter with a 62-41 advantage.

Although Arkansas was outscored 12-7 in the fourth quarter, the Razorbacks held K-state to 27.3 percent shooting in the fourth to hold the Wildcats back from making a late run. The Razorbacks earned the 69-53 victory to claim the Paradise Jam Reef Tournament Championship.

The Razorbacks return for a four-game homestand, starting with a matchup versus Troy on Thursday, Dec. 1. Tipoff is set at 7 p.m. at Bud Walton Arena.