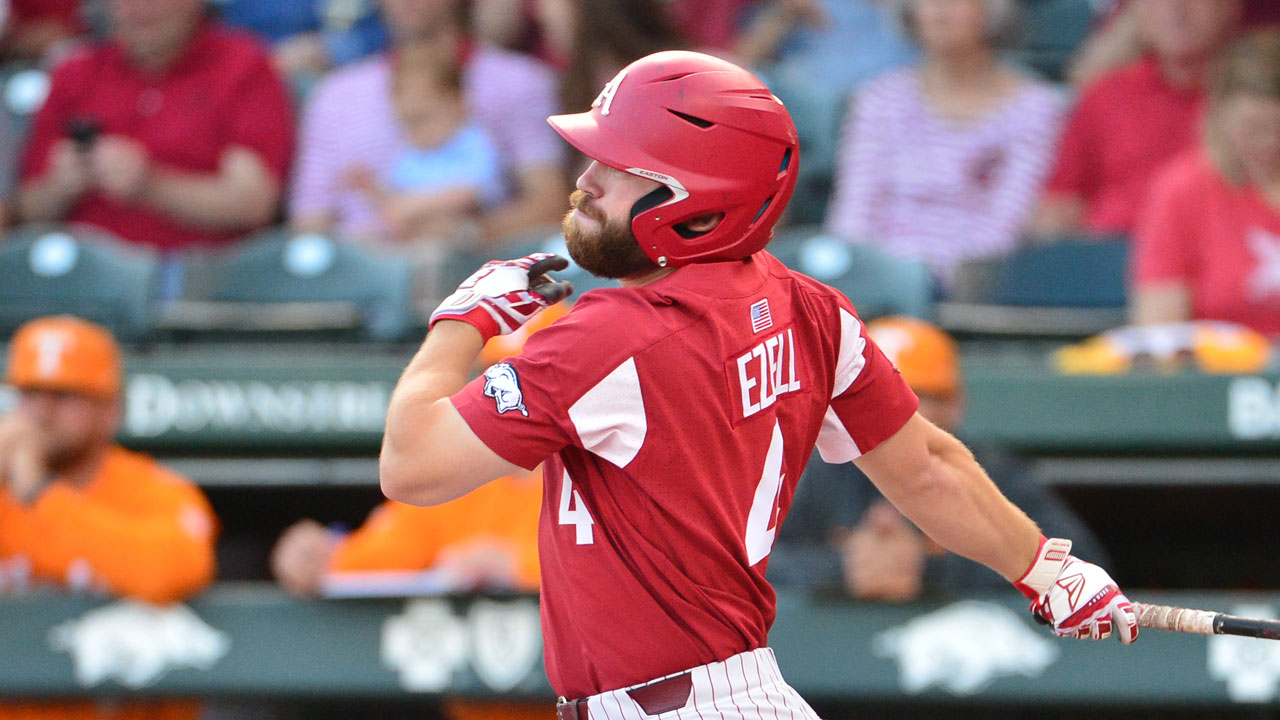 LEXINGTON, Ky. – The fifth-ranked Arkansas Razorbacks picked up their third-straight conference series win on Sunday at Kentucky Proud Park, defeating Kentucky, 9-1, in the first half of their doubleheader. Unfortunately, they could not complete their third-straight sweep, falling in the second game, 4-3, snapping their nine-game conference winning streak.

The Razorbacks (37-12, 17-7 SEC) have now won six Southeastern Conference series this year, three coming on the road and have come out winners in nine of their last 10 conference games. The nine-game streak in league play is the longest for a Razorback team since 2010.

With the win on the front end of the doubleheader, head coach Dave Van Horn picked up his 1,000th win in Division I play, joining eight other active head coaches in the nation. In his 31-season career, Van Horn has a combined record of 1,265-616, with 25 seasons coming at the Division I level.

Arkansas used a six-run sixth inning to blow the first game open after trailing 1-0 going into the final two innings. Junior Dominic Fletcher’s two-run home run in the top of the sixth, gave the Hogs the 2-1 lead and they never looked back. It was his only hit of the game, but was his ninth long ball of the year, third most on the team.

Freshman Patrick Wicklander looked strong on the mound through five innings in Sunday’s game one, giving up just one earned run on four hits with six strikeouts for his fifth win of the year. It’s his third-straight outing with six or more strikeouts and each consisted of less than six innings pitched.

Game 1 | Arkansas 9, Kentucky 1 (Box Score)
In the first game of the day, it looked as if Kentucky starter Dillon Marsh and Wicklander were going to be locked in a pitchers’ duel. Wicklander had the one blemish in the fourth inning when the Wildcats scored after a couple of singles, a throwing error and a groundout.

The San Jose, California native still looked sharp after giving up the run, as he struck out two more in the fifth to finish with six strikeouts on the day. Wicklander never gave up more than one hit in an inning except for the fourth and walked only one in his outing. It was his lowest walk total in five innings or more since March 12 against Western Illinois (5.0 IP, 1 BB).

Arkansas finally got to Marsh in the sixth after Matt Goodheart led off with a single and then Fletcher unloaded a first-pitch fastball over the left-centerfield wall to make it 2-1. Kentucky went to the bullpen after the homer, but still reached six of their next seven batters, scoring four more times for a six-run frame.

Right-hander Cody Scroggins relieved Wicklander in the bottom half of the sixth and looked very good in his first game back since April 14. Scroggins faced six batters over the next inning and a third, striking out four. Marshall Denton finished the game, getting the final two outs on 10 pitches.

As a team, Arkansas finished with 10 hits, marking the ninth time in the last 10 games that it has notched 10 or more hits in a game. This year, the Hogs have 28 games with 10 or more hits and 10 with 15 or more hits.

Game 2 | Kentucky 4, Arkansas 3 (Box Score)
The Hogs nearly got the sweep in game two of the doubleheader, getting the tying run to third base in the top of the seventh, but grounded into a game-ending double play to fall one run short.

Arkansas’ offense struggled against Kentucky starting pitcher Zack Thompson all game, who ended up trying for the complete game, but made it only 6.1 innings, while striking out 11.

Arkansas did manage a run in the third and another run in the fifth to keep it within two runs before the seventh. In the final inning, Trevor Ezell doubled with one out and later scored on a Goodheart single to make it 4-3. It was Goodheart’s second RBI of the game as he drove in Christian Franklin back in the third for Arkansas’ first run of the game.

Ezell and Goodheart both finished with two hits in the game. Ezell reached base four times in game one and two times in game two to complete a 4-for-7 day with two walks and three RBIs.

Starting pitcher Connor Noland was never able to settle in as he gave up four runs in 3.1 innings and six hits. He struck out four and walked only one, but gave up three solo home runs.

Up Next
Arkansas returns home for its final regular-season series of the year at Baum-Walker Stadium as it welcomes LSU to Fayetteville starting on Thursday and running through Saturday. Game time for the series opener is set for 6:30 p.m. and will be televised on ESPNU.