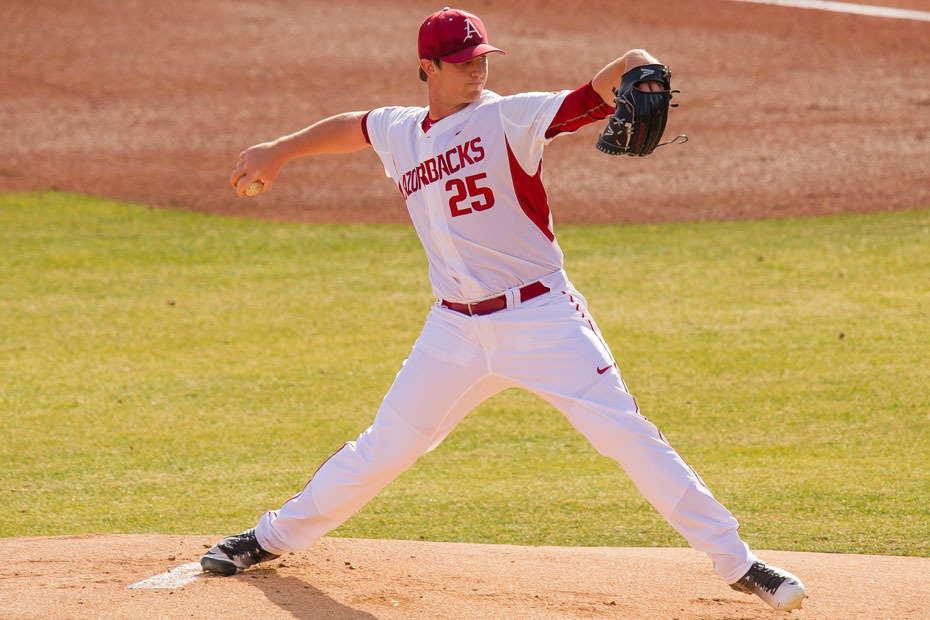 FAYETTEVILLE, Ark. – Behind a seven inning one-hit gem from junior right-hander Dominic Taccolini, the No. 22 Arkansas baseball team picked up its 22nd straight opening day win with a 6-1 victory over Mid-American Conference (MAC) West Division favorite Central Michigan on Friday afternoon in front of a record-breaking 9,620 fans at Baum Stadium.

The crowd of 9,620 is the largest on opening day in program history.

“It was incredible. I would like to thank the weather man personally for that,” said head coach Dave Van Horn, who improved to 14-0 in season openers at Arkansas. “I think there are a lot of people who really love baseball in this area and in this state. We have a beautiful ballpark, we are coming off a pretty good finish last year; the weather just threw it over the top. Instead of just getting maybe 5,000 or 6,000, we got 9,000 and I am just very appreciative. Some guys who wore this uniform for the first time tonight, I think they are in awe to be honest with you.”

Fueled by the opening day crowd in his first start since having his sophomore season cut short due to a blood clot in his throwing arm, Taccolini retired 13 consecutive batters during his 79-pitch outing, allowing just a softly-hit infield single in the second inning while striking out three and allowing just one run. The win is the ninth of Taccolini’s career, improving him to 7-1 in nine career starts at Baum Stadium.

“It was just great being out there on opening day. I had a lot of emotions after being injured last year,” Taccolini said. “I just threw a bunch of strikes and I let my defense work. They had a hard time hitting my fastball so Coach Jorn just kept calling it. We got ahead of hitters, got some quick outs and it allowed me to go deep in the game which was great.”

Starting at first base and occupying the cleanup spot in the lineup, senior Cullen Gassaway drove in Arkansas’ first two runs before a four-run eighth inning broke the game open. Junior Jake Arledge provided the big highlight of the four-run eighth with a two-run triple in his first at-bat as a Razorback. Arledge was able to score on his triple after the throw from center to third was off the mark.

Arkansas worked All-MAC first team pitcher Sean Renzi into throwing 30 pitches in the first inning, resulting in a 1-0 lead after Gassaway drove in freshman Eric Cole with a sharply-hit single into right field. Cole, who went 2-for-5 with two runs scored, battled back from a 0-2 count in his first career at-bat with a single through the left side which eventually led to the game’s first run.

The Chippewas manufactured their only run of the game in the second inning, using a hit-by-pitch and a softly hit single to third base to tie the game at 1-1.

Both starting pitchers found their groove after the second inning, as Renzi retired 13 straight Razorbacks before Cole broke things up with a bunt single down the third base line. Redshirt sophomore Carson Shaddy followed with a single into center field and both runners moved into scoring position on a well-executed sacrifice bunt by junior Clark Eagan. With one out, Gassaway delivered a groundout to the left side which was more than enough to plate the speedy Cole from third for the 2-1 lead.

Armed with the lead for the first time since the end of the first, Taccolini took care of the seventh before handing the ball over to NCBWA Stopper of the Year Watch List member Zach Jackson. Jackson struck out the first batter he faced on a called third strike before getting out of a little trouble with an inning-ending double play.

Arkansas and Central Michigan will return to Baum Stadium for the second game of three-game series on Saturday with first pitch set for 2:04 p.m. The game can be seen live on SEC Network+ or the WatchESPN App.

Game Notes
• Today’s attendance of 9,620 broke the previous season opener record of 8,974 set in 2012 against Villanova.
• Arkansas has won 22 straight season openers and is 46-11 in openers since 1960,
• Head coach Dave Van Horn is 14-0 in season openers at Arkansas.
• The Razorbacks have won 16 straight and 20 of their last 21 home games at Baum Stadium in the month of February.
• Taccolini’s seven innings marks the longest opening day start by a pitcher under coach Van Horn at Arkansas, besting the six innings by Chris Rhoads (2006), Dallas Keuchel (2009) and Jalen Beeks (2014).
•  Taccolini retired the side in five of his seven innings.
•  The multi-RBI game was the fourth of Gassaway’s career.
•  Cole and Shaddy led Arkansas with two hits each.
•  The multi-hit game is the sixth of Shaddy’s career.