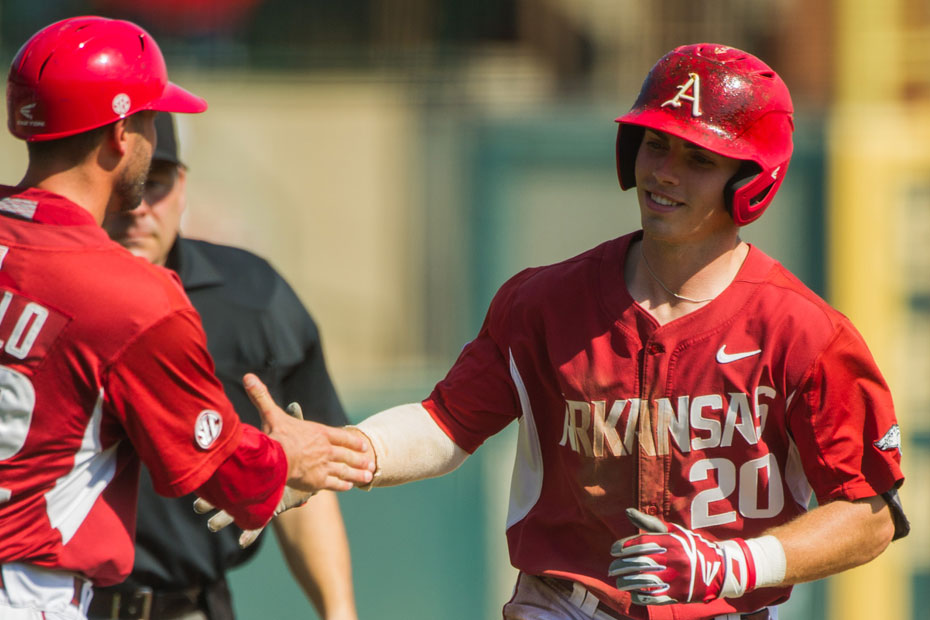 TUSCALOOSA, Ala. – With a new top-20 ranking and the best overall record in the Southeastern Conference, the No. 17 Razorbacks are back on the road this weekend for an SEC Western Division matchup with the Alabama Crimson Tide at Sewell-Thomas Stadium. The three-game series is set to start on Friday at 6 p.m.

The Hogs are coming off a series win over No. 18 Missouri last week in Columbia, moving their conference record to 5-1 for the year and a tie for the best mark in the western division with Auburn. With 20 wins through 25 games, Arkansas has reached the 20-win plateau faster than any Razorback team in the last five seasons.

Much of that success can be attributed to strong starting pitching. Sophomore Blaine Knight continued his Friday night dominance, going six innings against the Tigers last week and holding them to just two earned runs, while striking out seven, even after waiting out a two-hour rain delay in the fourth inning. Knight along with junior Trevor Stephan have a 3.04 ERA and 91 strikeouts combined along with holding hitters to a .196 batting average, going into the third week of conference play.

Follow Live
Friday’s game will be available online only on SEC Network+ via the WatchESPN app. Eli Gold (PXP) and Lance Cormier (Analyst) will call the action for game one. Saturday and Sunday’s games will be available on the SEC Network with Clay Matvick (PXP) and Mike Rooney (Analyst) on the call. Phil Elson (PXP) will also call the game for the Razorback Sports Network on the radio.

The Dark Knight Rises
Sophomore Blaine Knight has been the Friday night starter since Opening Day for the Razorbacks, but his numbers have improved since hitting conference play. In his first three starts, Knight only had one quality start and totaled one victory. In his last three starts, Knight has two quality starts, both against SEC teams (Mississippi State and Missouri) and has struck out seven or more batters twice.

Hawgball Hurlers
With the introduction of Wes Johnson’s pitching philosphy, Arkansas’ pitchers have seen a major increase in almost every statistical category from last year. The Razorbacks currently lead the SEC with 268 strikeouts and have five pitchers with an ERA under 3.00 in 15.0 or more innings.

Soooieville Sluggers
The Razorbacks have been hitting home runs at an unreal pace this year. Currently leading the SEC with 36 home runs this year, the Hogs have 12 more home runs than Mississippi State, which is tied for second in the league in long balls. The 36 homers is also the ninth-most in the country, trailing first-place Virginia Tech by 11. Arkansas is the only team in the SEC with multiple players with six or more home runs this year. Catcher Grant Koch is tied for first in the SEC with eight home runs, while infielder Carson Shaddy and outfielder Dominic Fletcher each have six long balls.

Fletcher Has The Power
Freshman Dominic Fletcher hasn’t needed long to get used to the college game. The California native has started in centerfield for 22 of Arkansas’ 25 games and is hitting .272 with six home runs. The long ball total is currently the most by an SEC freshman this season and is the most by a Razorback freshman since Zack Cox had 13 during the 2009 season, setting the Arkansas freshman record.

Shaddy Picks Up The Pace With The Bat
Since conference play began two weeks ago, infielder Carson Shaddy’s offensive numbers have been off the charts. Through the first six SEC games, Shaddy is batting .435 (10-for-23) with three home runs and a slugging percentage of 1.000. Shaddy is one of two SEC players (Brent Rooker) with a slugging percentage at or above 1.000 in conference play. Those numbers are the highest for a Razorback through the first six games of the conference season since Zack Cox hit .458 with three home runs and nine RBIs, but only slugged .917.