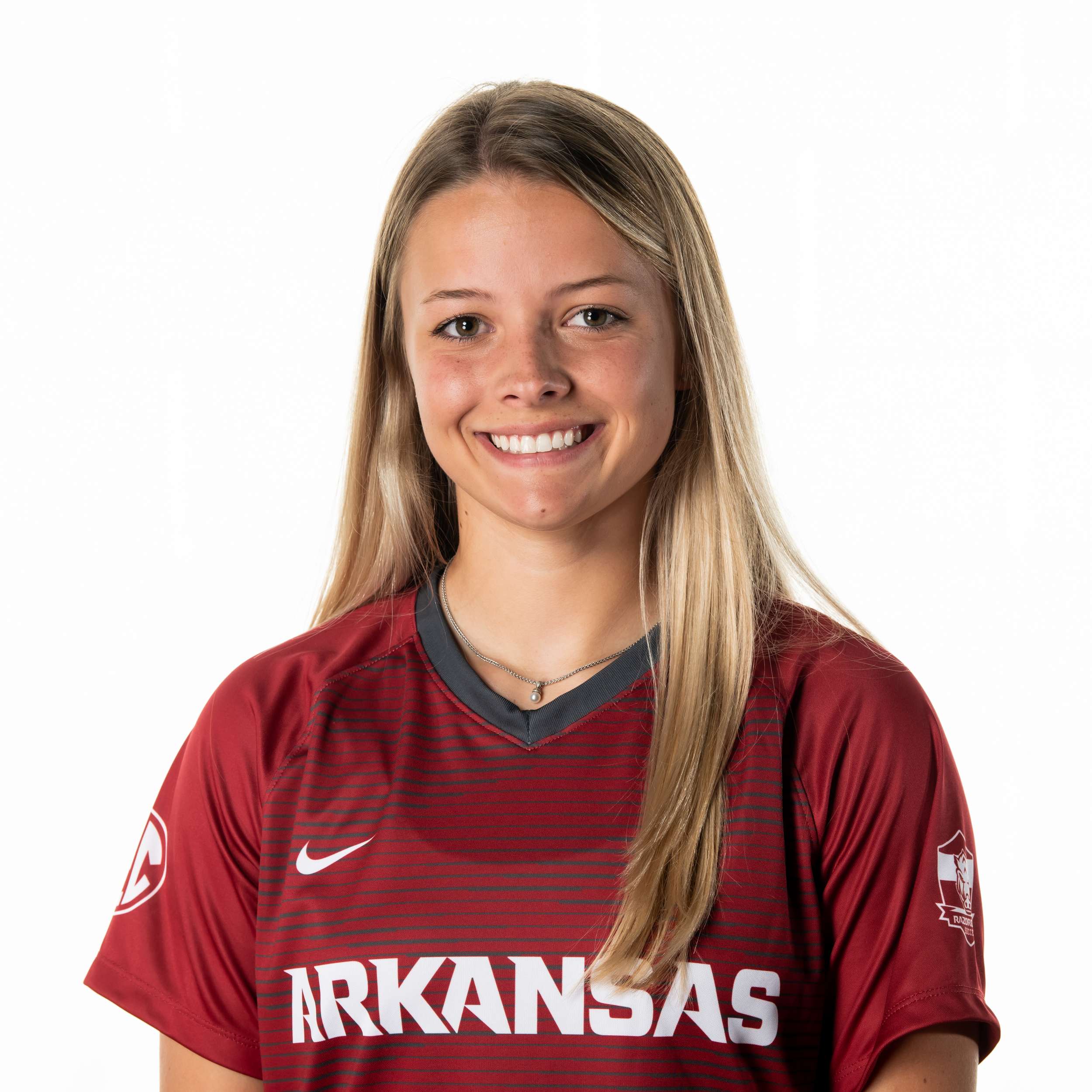 As a Junior (2019)
Made a start in 22 of 23 matches, logging 1,754 minutes primarily as a defender… Dished out an assist to Bryana Hunter in the 58th-minute of Arkansas’ SEC Championship clinching win at Tennessee … Played a season-high 110 minutes against Minnesota (Aug. 29) and played the full 90 minutes in the SEC Tournament semifinals and championship game and first round of the NCAA Tournament.

As a Sophomore (2018)
Played in 23 matches, starting 22, while logging 1,757 minutes, a career high … Started the final 22 matches of the season, including the three SEC Tournament matches and the two NCAA Tournament matches … Worked primarily in the midfield and scored two goals along with three assists for seven points … Goals came in the win over Baylor (Aug. 31) and UConn (Sept. 9) … Assists came in the draw against No. 9 West Virginia (Aug. 19) UConn and at Kentucky (Oct. 11) … Against UConn, she tallied her first three-point performance, helping with a game-tying goal by Marissa Kinsey in the 38th minute and later scored her only game-winning goal of the year on an intended cross in the 65th minute … Notched a season-high four shots in the same game … Tallied her lone point in conference play when she garnered the assist off a free kick to Tori Cannata in the 54th minute, leading to Arkansas’ 4-0 shutout of Kentucky … Played 90 or more minutes seven times, including four matches of 100+ minutes (104 vs. LSU – Oct. 4; 110 vs. at Mississippi State – Oct. 18; 103 vs. LSU – Nov. 4; 107 vs. Virginia Tech – Nov. 16) … Named to SEC Fall Academic Honor Roll, majoring in Psychology.

As a Freshman (2017)
Played in 20 matches, starting six, while logging 876 minutes of play … Made collegiate debut in the season opener at SMU (Aug. 18), logging three minutes … Made her first collegiate start in the regular-season finale against Tennessee (Oct. 26) and played 84 minutes … Made six-consecutive starts to finish the year, including in all four SEC Tournament matches and the NCAA Tournament First Round match at NC State … Scored two goals and notched two assists for six points, one of four Arkansas freshmen to total six or more points during the year … Scored her first collegiate goal in a 6-1 victory over Abilene Christian (Aug. 27), finishing near the right post in the 78th minute … Scored her second goal of the year and first in SEC play at Kentucky (Oct. 22) with a header off a corner kick from Parker Goins in the 16th minute … Tallied her only two assists of the year in the 11-0 shutout of Mississippi Valley State (Sept. 3), helping on goals in the 39th and 72nd minutes … Totaled a season-high five shots with four coming on goal in the same game … Was one of seven Razorback players to have a multi-assist match during the season … Played 90 or more minutes in a match twice with a season-high 92 minutes coming in the SEC Tournament semifinals against Vanderbilt (Nov. 2).

Club
Played for the D’Feeters ECNL team in Texas.