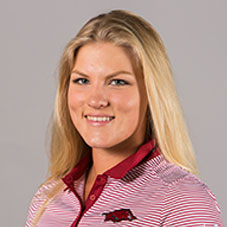 AS A SENIOR (2017-18)
Earned Women’s Golf Coaches Association Second-Team All-America honors … First-Team All-Southeastern Conference
selection … Ranked third on the team with a 71.68 stroke average … Career-bests for stroke average (71.68), score versus par (-0.15) and rounds of par or better (21) … Five top-10 finishes … Four top-5 finishes … Ten rounds in the 60s … Was the only Razorback to shoot in the 60s with a 69 in round three at the NCAA Championship … Counted 33 of 34 rounds or 97.1% toward the team total … Won her match against the No. 3 player in the country to help Arkansas to the program’s first Southeastern Conference title in program history.

AS A JUNIOR (2016-17)
Arkansas’ top player for the season … Led the team with a 72.46 stroke average … Named to the SEC Second-Team … Four top-10 finishes … Got her first collegiate win at the UTSA Maryb S. Kauth Invitational … Fifteen rounds of par or lower as a junior … Arkansas’ low finisher in two events in the fall and was one of the top two in seven of 10 events … Earned the sponsor’s exemption for the #NWAChampionship LPGA event in June 2017.

AS A SOPHOMORE
Five top-10 finishes in her career … Played in every event as a sophomore … Career-best tie for second at the 2014-15 NCAA Regional Championship in her first postseason appearance … Paced Arkansas with a third-place finish at 216 NCAA Regional Two-time member of the University’s Athletics Department Academic Honor Roll … Ranks second on the team with a 73.31 stroke average … Ranks 22nd in the SEC, 37th in Golfstat.com and 60th in the Golfweek.com rankings

AS A FRESHMAN
Played in two events in the fall … Shot 223 with rounds of 72-75-76 at the Powerade Cougar Classic helping Arkansas to the title … Competed as an individual at the Schooner Fall Classic … Shot 232 at the Schooner…Played in final four events of the season…Tied for runner-up finish at the NCAA Regional Championship shooting 216…216 is career-best…Had final round 69 for collegiate career-best at the NCAA Regional…Shot 309 in first-ever NCAA Championship…Finished freshman season with 75.42 stroke average.

PRIOR TO ARKANSAS
Alana Uriell comes to Northwest Arkansas by way of Carlsbad, Calif….In her most recent action before college, Uriell reached the semifinal match of the U.S. Women’s Amateur Public Links…She lost in 20 holes in semifinal of the event…Uriell qualified for and played in the U.S. Girls Junior four times and qualified twice for the U.S. Women’s Amateur Public Links…She had a busy junior golf career including shooting 148 (75-73) in the 2014 AJGA Junior at River Ridge Golf Course, finishing fifth…She posted a 215 with rounds of 76-71-68 to place seventh at the AJGA Winn Grips Heather Farr Classic earlier in the year…As a junior, Uriell had three top 10 finishes including a runner-up finish at the AJGA Junior at River Ridge shooting 75-72=147…She was third at the AJGA Junior at Robinson Ranch carding a 217 and was sixth at the AJGA ClubCorp Mission Hills Desert Junior with a 221…Uriell is a four-time USGA Championship participant and played in the Kraft Nabisco Junior Challenge as a senior…A four-year letterwinner for the Carlsbad High Lancers, Uriell paced her team to four League Championships…As a sophomore, she qualified for the state championship and won a USGA Girls Junior Championship Qualifier…As a junior, Uriell placed second in an ASGA event at River Ridge and she was a team captain as a senior…In addition to golf, Uriell was a high school junior All-American in track and cross country…Uriell is an artist whose work has been featured in her home community…She participated in the Arts for Healing project in which her painting was selected to hang on Grand Avenue in Carlsbad Village.

PERSONAL
Born Aug. 22, 1996…One of two children of Pat and the late Barbara Uriell…She has a younger brother, Connor.