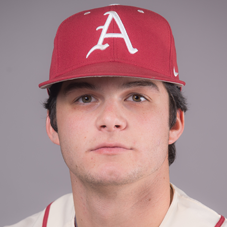 Put together the most prolific season in Arkansas baseball history, winning four national player of the year awards, including the Golden Spikes Award and the Dick Howser Trophy … Was named National Player of the Year by Baseball America and Collegiate Baseball … Named the SEC Male Athlete of the Year, the fourth Arkansas athlete to earn SEC Athlete of the Year honors … Is the first Arkansas baseball player to ever win SEC Player of the Year and National Player of the Year honors … Was a consensus first-team All-American … Led the nation with 20 home runs and paced the SEC with a .376 batting average … Became the third player in the 81-year history of the conference to lead the league in home runs and batting average, joining Mississippi State’s Rafael Palmeiro in 1984 and Kentucky’s Jeff Abbott in 1994 as the only players to accomplish the feat … Was the first Division I player in seven years and first SEC player in nine years to hit 20 home runs and steal 20 bases in a season … Led the SEC in batting average (.376), home runs (20), slugging percentage (.717), on‐base percentage (.488) and walks (50) and was the only player in the country to rank in the top 25 in all five categories … Was the fifth player in program history to hit 20 home runs in a season … Finished third in the country in slugging percentage … Hit .443 in 29 SEC games, including a .736 slugging percentage and .527 on base percentage … Recorded 28 multi-hit games, 19 multi-RBI games and had a team-best reached base streak of 26 games … Scored a season-best five runs against Mississippi Valley State (April 8), drove in a season-high five runs against Loyola Marymount (March 7) and launched multiple home runs in a game against Mississippi Valley State (April 8) and Kentucky (April 10) … Was selected No. 7 overall by the Boston Red Sox in the 2015 MLB Draft, becoming the third highest draft pick in school history.

Played in 61 games as a true freshman, with 60 starts in the outfield … Hit .276 with eight doubles, 27 runs batted in and 45 runs scored … Stayed in the top third of the lineup all season and started 27 games in the leadoff spot … Was named to the SEC All-Freshman Team … Led Arkansas with 17 stolen bases … Hit first collegiate home run against Eastern Illinois (Feb. 23) … Recorded first career three-hit game against Northwestern State (April 22), where he reached base five times and stole two bases … Had an eight-game hitting streak during the year and recorded 20 multi-hit games and seven multi-RBI games … Tallied five assists from the outfield and had a .992 fielding percentage.

Son of Chris and Jill Benintendi … Has two sisters, Olivia and Lilly … Father played college baseball at Wittenburg … Has not declared a major.