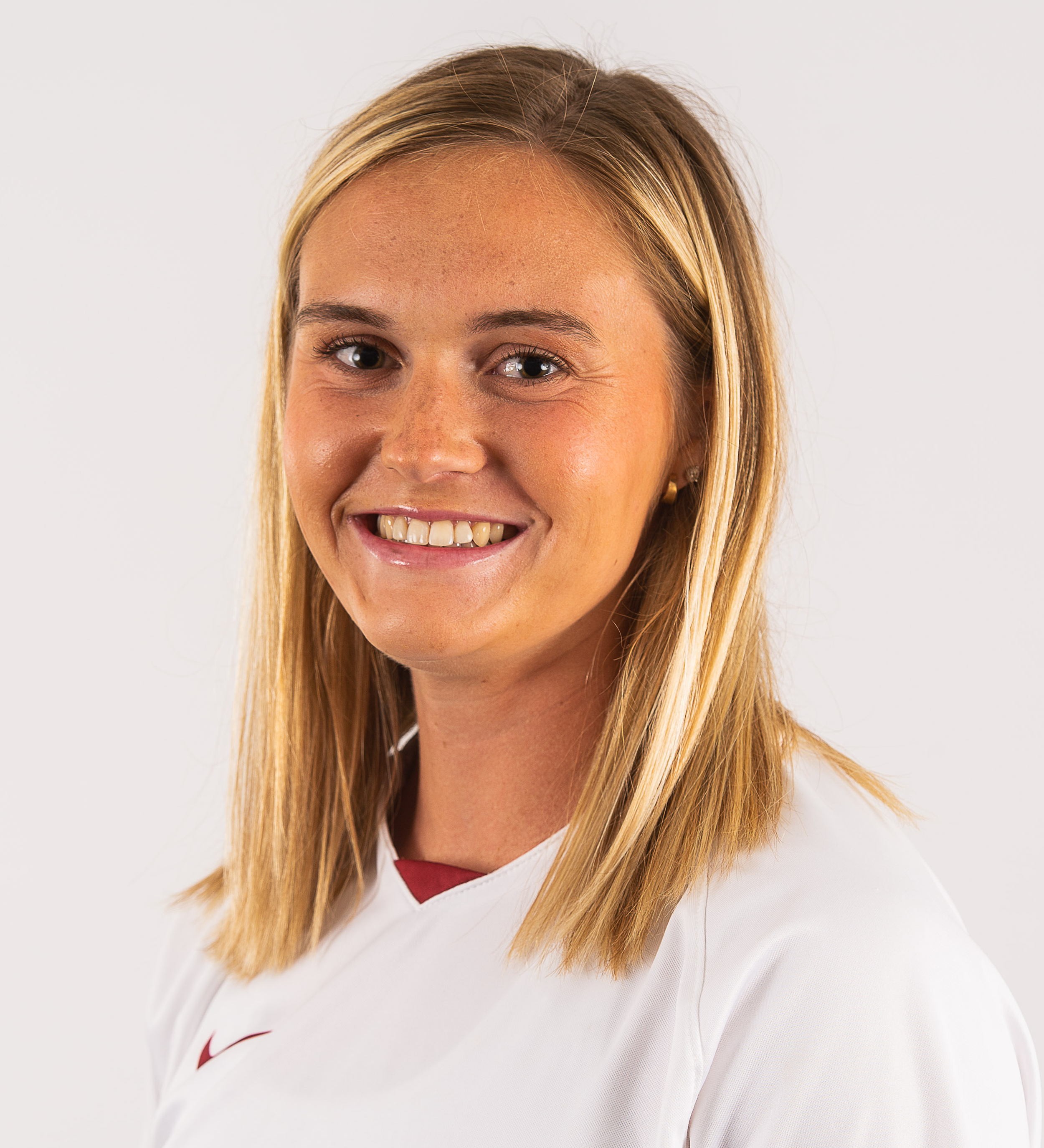 The Program Leader In…

Became the program’s all-time leading scorer on Nov. 18, when she recorded her 45th career goal against Ohio State in the NCAA Tournament … Set the program’s all-time points record with her 109th point after she assisted a goal against Auburn on Sept. 22 … Took sole possession of the program’s all-time game-winning goals record after notching her 15th against Vanderbilt on Oct. 9 … Named USC National Player of the Week, TDS National Player of the Week and the SEC Offensive Player of the Week after she notched three goals and one assist in week four, against No. 13 BYU and Grand Canyon … Started in all 22 matches and recorded 60+ minutes in 18 matches … Notched 3+ shots in 13 matches … Netted three game-winners: at Grand Canyon (Sept. 11), vs. Texas A&M (Sept. 29) and vs. Vanderbilt (Oct. 9) … Her 1,714 minutes are her most in a season.

Started in 21 of the Hogs’ 24 games, recording 1,557 minutes… Was put on the MAC Hermann award watchlist for the second straight year… Led the SEC in goals (16) and points (38), earning her a spot as an All-SEC first-teamer… Scored six of the Hogs’ game-winning goals, including the OT winner at Texas A&M… Notched one of her three braces of the season against No. 24 BYU on Aug. 30… She converted 16 of her 35 shots on target, for a SOG% of .636… Scored three goals in the Razorbacks’ Elite 8 run… Named SEC Offensive Player of the Week for Sept. 23… Moved up to No. 4 on the program’s all-time goals (37) list and third on the all-time points list (97)… Named to the SEC Fall Academic Honor Roll.

Became the first USC First Team All-American and SEC Forward of the Year in program history… Was named the first MAC Hermann Award semifinalist in school history… Racked up seven goals and a team-leading 10 assists and 24 points… Her 10 assists were tied for the SEC lead and fifth nationally while she was second in the league in points… Her seven goals were second on the team and she had two braces during the season… Recorded two goals and two assists for six points in a 4-1 victory at Kentucky (Sept. 27)… Put away two goals and an assist in a 7-0 win against Missouri State (Feb. 23)… Added a game-winner in Arkansas’ first all-time matchup with Arkansas State in the 61st-minute… Was second on the team with 47 shots and led the team with 32 SOG… Played in 1,345 minutes, going the full 90 in nine matches… Named to the SEC Fall Academic Honor Roll while majoring in Nursing.

Started in all 23 matches during her freshman campaign, logging 1,740 minutes … Became the first SEC Freshman of the Year in program history … Podojil and Haley VanFossen were named the first USC All-Americans in school history … Was named the United Soccer Coaches National Player of the Week on two occasions … Three-time SEC Freshman of the Week and one-time SEC Offensive Player of the Week … Led the team with 35 points and 14 goals … Her 14 goals tied for second nationally among rookies and ranked second in the entire conference … Dished out seven assists for the fourth most on the squad … Tallied a point in an eight game stretch from Aug. 29 through Sept. 26 when the Razorbacks outscored opponents 26-1, racking up six goals and two assists … Netted a hat trick and an assist in a 6-1 route over Mississippi State on Oct. 13 … Scored the game-winner in Arkansas’ program-first win over a top-ranked North Carolina squad on Sept. 15 … Notched five game-winners including a 59th-minute goal against Florida in the SEC Tournament to send the Razorbacks back to the SEC title game for the fourth-straight season … Delivered an assist to Parker Goins for a goal in the first round of the NCAA Tournament against North Texas.

Club
Invited to three USWNT U18 training camps and part of USWNT player pool for the U18 age group … Ranked in IMG Top 150 as the No. 35 player in the nation, No. 8 player among forwards and the No. 3 player in the Great Lakes Region for the 2019 recruiting class, according to Top Drawer Soccer.