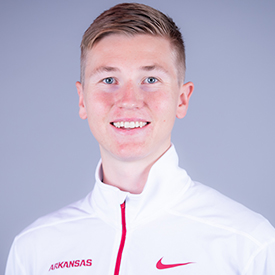 Senior (2018)
Did not compete during the indoor season… Competed in six meets during the outdoor season… Posted a personal-best time of 13:50.87 in the 5,000-meters at the Bryan Clay Invitational (Apr. 19)… Scored at the SEC Outdoor Championships in the 10K with a sixth-place finish… Took ninth-place in the 5,000-meters at the SEC Outdoor Championships running 14:14:14… Qualified for the NCAA West Regional in the 5K and 10K

Junior (2017)
Opened his third season placing second in the mile at the Arkansas Qualifier … Contributed points to Arkansas’ SEC Indoor victory as a member of the runner-up finishing DMR team … Kicked off his outdoor season placing 12th in the 5,000 at the Stanford Invitational … Went on to run a PR of 14:00.33 at the Bryan Clay Invitational for seventh place … Posted a season best of 3:47.57 in the 1,500 at the John McDonnell Invitational … Part of the second-place finishing Razorback 4-x-800-meter relay team at the SEC Relays … Scored five points at the SEC Outdoor Championships off a sixth-place finish in the 10,000 and a seventh-place finish in the 5,000 … Wrapped up his season placing 14th in the 5,000 at the NCAA West Preliminary Round.

Freshman (2015)
NCAA Indoor First Team All-American (DMR) … Ran a season-best of 4:02.36 in the mile at the UW Husky Classic … Earned SEC All-Freshman team honors with a fourth-place finish in the mile at the SEC Indoor Championships … Qualified for the NCAA Indoor Championships with the DMR … Finished eighth at the indoor national meet with the DMR … Capped the year with a personal best 4:00 mile at the St. Louis Nike Festival of miles.

Personal
Born on Nov. 16, 1995, in Dickinson, N.D. … Son of Dean and Allison Dalquist … Has two siblings, Kirsten and Keaton … Plans to major in either accounting or business management.