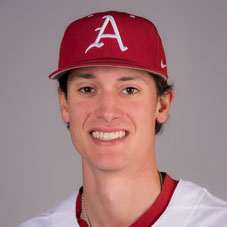 As a Sophomore (2017)
Made 17 appearances on the mound, 16 being starts … Named Opening Day starter against Miami (Ohio) … Named to Golden Spikes Mid-season Watch List … Generated a 3.28 ERA in 90.2 innings pitched, the second-lowest ERA among Razorback starting pitchers … Compiled an 8-4 record, the most wins of any Arkansas pitcher and the most since Chris Oliver had eight in 2014 … Made his one relief appearance in the final game of the NCAA Fayetteville Regional against Missouri State, facing three batters in the eighth inning and allowing one walk … Struck out 96 batters and walked only 20 for a 4.8 strikeout-to-walk ratio … Strikeouts ranked second on the team and 10th in the SEC … Set career-highs in wins (8), starts (16), innings pitched (90.2), and strikeouts (96) … Was best among Arkansas starters in SEC play with a 6-3 record and a 3.38 ERA in 10 starts … ERA was in top-15 among conference pitchers … Had only one quality start in first four outings before racking up five-straight quality starts, all against SEC opponents (Mississippi State, Missouri, Alabama, LSU, Georgia) … Had a total of eight quality starts on the year, his best coming at Alabama (March 31), where he threw eight strong innings and allowed just one earned run on three hits with seven strikeouts … Recorded 10 or more strikeouts vs. No. 5 Arizona (March 3), Mississippi State (March 17), and Ole Miss (April 27) … The 20 walks for the year were the 13th-lowest in the league … Opened season a stretch of seven-straight games with one walk or less allowed … During same span, he struck out 48 batters and had allowed only 10 earned runs in 40.1 innings … Had a strong final stretch to the season, allowing only six earned runs in final five appearances, striking out 24 batters and walking seven in 23.2 innings.

As a Freshman (2016)
Made 18 appearances on the mound, good for third-highest on the team … Earned seven starts … Was part of the opening weekend rotation against Central Michigan … Compiled a 2.98 ERA, the lowest ERA among Razorback pitchers with 10 or more appearances … Had one save in his 11 relief appearances … Struck out 46 batters and walked just 14 over his 48.1 innings of work … Ranked third on the team in strikeouts … Improved in SEC action with a 1.78 ERA over 25.1 innings … His ERA was the lowest on team among pitchers with 10 innings or more in SEC play … Gave up just five earned runs in nine conference appearances and struck out 25 batters … Made first collegiate start vs. Central Michigan (Feb. 20), going 5.0 innings and giving up just two earned runs, while striking out three in his first career win … Seven of his final nine appearances came in relief … Had stretch of eight-straight games without giving up an earned run … During the eight-game stretch, he only allowed one unearned run on 11 hits and struck out 14 … Had one of best outings of year at No. 13 LSU, going 3.2 innings out of the bullpen and striking out a season-high eight batters … Picked up only save against No. 18 Oklahoma State, getting final out on three pitches … Never allowed more than two walks in an outing … Recorded five or more strikeouts vs. Western Illinois (March 12), at No. 14 Ole Miss (April 8) and at No. 13 LSU (May 7).

Bryant High School
Played for head coach Kirk Bock … Named the No. 11 prospect in the state of Arkansas, including the No. 7 right-handed pitcher in the state by Perfect Game … As a senior, went 6-2 with a 1.30 ERA … As a junior, went 11-0 with a 0.49 ERA, including 80 strikeouts in 65.2 innings … Named the 7A State Tournament Most Outstanding Player in 2014 and earned Arkansas Democrat Gazette All-State first team honors … Named to the 2014 Louisville Slugger High School All-American First Team … Two-time state champion … Team was routinely ranked in the top 10 all four years … Played summer ball for the Arkansas Express … Named Perfect Game Underclass Honorable Mention in 2014 … Was on student council … Most memorable athletic moment was winning the state championship as a junior.