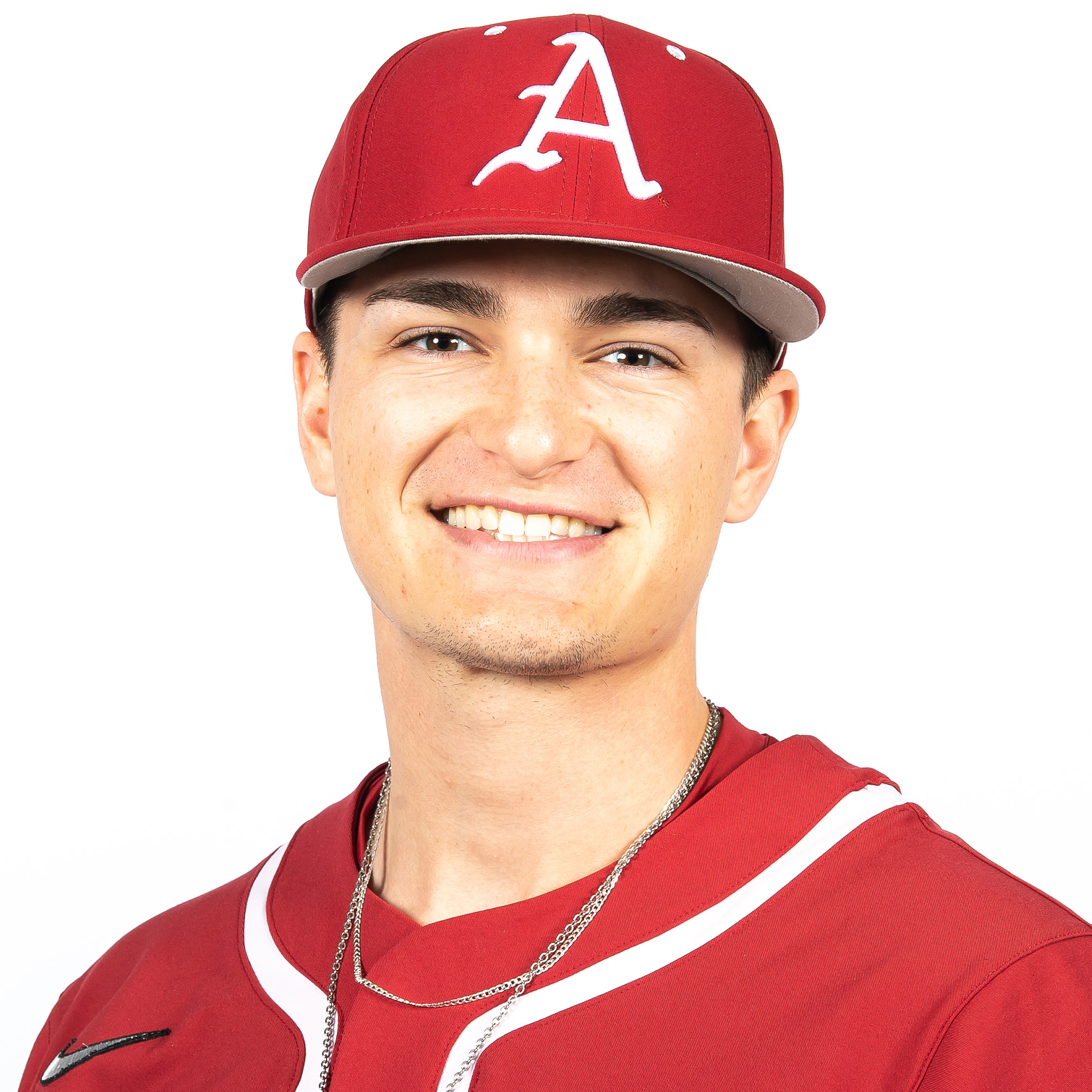 Junior (2022)
Played in 63 games with 62 starts (37 as designated hitter, 13 in right field, 12 at first base), slashing .255/.332/.523 with a team-leading 16 homers and 58 runs batted in … Tied INF Cayden Wallace for the team lead in home runs (16) … Had three games with multiple homers … Scored 35 runs on the year … Tallied 61 hits, including 10 doubles and a team-best three triples … Drew 30 walks … Totaled 125 bases, third most among Razorback hitters … 2-for-3 in stolen base attempts … Led the Hogs and tied for first in the SEC in sacrifice flies (7) … Recorded 17 multi-hit games, including two three-hit efforts and a pair of four-hit games … Had 15 multiple RBI games, including seven three-RBI performances, one four-RBI game and one six-RBI games … Season-long six-game hitting streak … Season-long reached base streak of 10 games … Defensively, committed three errors in 99 total chances (.970 fielding percentage) … In SEC play, posted a .214/.311/.490 slash line with seven home runs and 18 RBI over 28 games … Had two multi-home run games against SEC opponents: at Texas A&M (April 23) and against No. 24 Vanderbilt (May 13) … Hit his first homer of the season against Omaha (March 2) … Went 2-for-3 with a double, a home run and three RBI in game one of a doubleheader against UIC (March 10) … Had two base hits, including a double and a homer run, with three runs batted in against Mississippi State (April 2) … Teed off in game one of a doubleheader against UAPB (April 12), going 4-for-5 at the plate with a pair of home runs, six RBI and three runs scored … Recorded his second four-hit game of the season against Arkansas State (April 19), hitting a grand slam in the Hogs’ win … Drew two walks and socked two solo home runs at Texas A&M (April 23), his second multi-homer game of the year … Hit a pair of solo blasts against No. 24 Vanderbilt (May 13), his third multiple home run game of the season … In the NCAA Tournament, slashed .261/.340/.457 with three home runs and 11 runs batted in … Hit two homers and drove in five RBI in the NCAA Stillwater Regional … Had two hits, two walks and three runs batted in at No. 6 Oklahoma State (June 5) … In the NCAA Chapel Hill Super Regional, went 4-for-10 with three RBI … Hit a walk-off RBI single at No. 11 UNC (June 12) to send the Hogs to the College World Series … Collected a pair of hits and two RBI vs. No. 2 Stanford (June 18) … Crushed a 436-foot home run vs. Ole Miss (June 22), the longest recorded home run in a College World Series game at Charles Schwab Field … Earned preseason All-SEC honors from the league’s coaches … Helped Arkansas set a new school record in fielding percentage (.982) for a season.

Retained eligibility due to COVID-19 pandemic … Played in 57 games with 56 starts (50 at first base, three as designated hitter, three in right field), slashing .284/.347/.560 with 14 homers and a team-leading 63 runs batted in … Posted team highs in batting average (.284) and slugging percentage (.560) among Razorbacks with at least 100 at-bats … Tied for fourth in the SEC in RBI and ranked 14th in the conference in slugging percentage … Scored 49 runs … Racked up 62 hits, third most on the team … Tallied 12 doubles and three triples to go along with 19 walks and five HBP … Totaled 122 bases on the year, second most among Razorback batters … Added six sacrifice flies, also second most among Arkansas batters … Recorded 18 multi-hit games, tying with INF Robert Moore and OF Christian Franklin for the team lead … Led the Razorbacks in multi-RBI games with 16, including a team-leading three five-RBI efforts … Had a season-long hitting streak of seven games and a reached base streak of eight consecutive games … Perfect 2-for-2 in stolen base attempts … Recorded a .995 fielding percentage, committing only two errors in 409 chances during the season … Made his Arkansas against No. 3 Texas Tech (Feb. 20) in the State Farm College Baseball Showdown at Globe Life Field in Arlington, Texas, collecting a hit and two runs scored … Drove in four runs on two hits, including his first home run of the season, against No. 9 Texas (Feb. 21) the very next day … Doubled twice and drove in a pair of runs on the road at Louisiana Tech (March 13) … Had a three-hit day against Oklahoma (March 16), homering and picking up four RBI … Posted his first five-RBI day against Little Rock (April 7), hitting a home run in Arkansas’ 10-3 win … First multi-homer game came against UAPB (April 14), swatting two home runs and tallying five RBI … Also homered twice against No. 9 Florida (May 22), driving in five runs to help the Razorbacks conclude the regular season with a three-game sweep of the Gators … Doubled and drove in two runs against No. 16 NC State (June 11) in game one of the NCAA Fayetteville Super Regional … Named one of 42 semifinalists, along with teammates OF Christian Franklin and RHP Kevin Kopps, for the Dick Howser Trophy, given to the top player in collegiate baseball … Part of a Razorback offense that hit a school-record 109 home runs in 2021 … Helped Arkansas set a school record in fielding percentage with a .980 mark for the year.

Team MVP and Johnson County CC Male Athlete of the Year … Played in and started 22 games during the pandemic-shortened season, slashing .507/.543/1.240 with nine doubles, two triples, 14 home runs, 47 RBI and 25 runs scored … Also stole three bases … Racked up 13 multi-hit games and 12 multi-RBI efforts on the year … Drove in runs in 19 of 22 contests, finishing the abbreviated campaign with an RBI in 10 consecutive games … Led the NJCAA in homers and RBI … Named the NJCAA National Player of the Week once during the campaign … Led the Kansas Jayhawk Conference in hits, home runs and RBI, earning the league’s Player of the Week award for three consecutive weeks … Swatted two homers and drove in a season-high six RBI against Kirkwood CC (March 1) … Two hits, including a home run, and five RBI in a 32-0 win at Labette CC (March 7) … Ranked No. 20 on Prep Baseball Report’s Top-100 JUCO Prospects.

Freshman at Wichita State (2019)
Played in 46 games, making 38 starts on the year … Batted .218 with 32 hits, 20 runs, four doubles, one home run, 23 RBI, 21 walks and four stolen bases … Had eight multi-hit and seven multi-RBI games during the campaign, including three-RBI efforts against Oral Roberts (March 12) and East Carolina (May 21) … Swatted his first collegiate homer in the contest against ECU, powering the Shockers to a 6-2 win over the top-seeded Pirates in the opening round of the American Athletic Conference Baseball Championship.

High School
Played for head coach Rick Setter at Olathe Northwest HS … Top-ranked shortstop in the state of Kansas by Perfect Game … Ranked as the No. 1 overall player and shortstop in the state of Kansas by Prep Baseball Report … 2019 Perfect Game Preseason All-American (Central Region Honorable Mention) … 2018 Perfect Game Preseason Underclass All-American (High Honorable Mention) … First team all-state and first team All-USA Today High School Sports as a junior … Team’s offensive MVP as a junior in 2018, hitting .391 with 10 doubles, four triples and two homers … First team all-conference selection as a junior and second team all-conference honoree as a sophomore … Was a member of the 2017 and 2018 sub-state championship teams … Played basketball as a freshman.