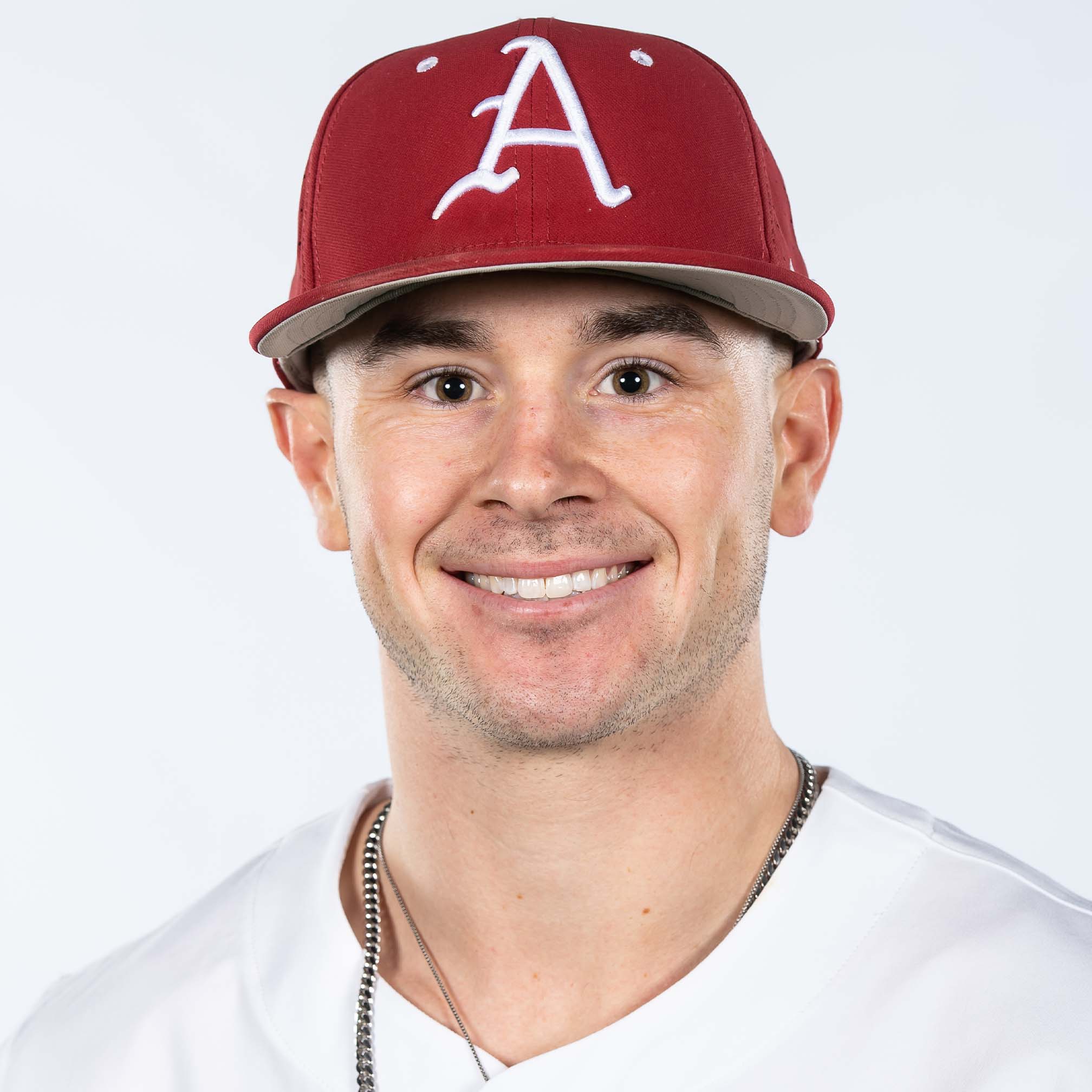 Redshirt Senior (2021)
Played in 48 games with 26 starts (22 in left field, 3 in center field, one as designated hitter), slashing .174/.372/.413 with six homers and 16 runs batted in … Scored 25 runs on the year … Drew 21 walks and was hit by eight pitches … Tallied one multi-hit game and and four multi-RBI games … Season-long hitting streak of four games and reached base streak of eight consecutive games … Perfect 6-of-6 in stolen base attempts … Posted a .981 fielding percentage, committing only one error in 53 chances … Started in the season opener against No. 3 Texas Tech (Feb. 20) in the State Farm College Baseball Showdown at Globe Life Field in Arlington, Texas, recording a stolen base and two RBI on one hit and a walk … Drew a season-high four walks and swatted his first homer of the season against Memphis (March 23) … Hit his second home run of the year on the road at No. 2 Mississippi State (March 27) … Logged his second multi-RBI game at No. 3 Ole Miss (April 11), collecting a pair of runs batted in with three runs scored and three walks … First of two three-RBI efforts came on the road at No. 4 Tennessee, hitting a home run in the process … Turned in another three-RBI performance against NJIT (June 4) in the NCAA Fayetteville Regional with his sixth homer of the year … Part of a Razorback offense that hit a school-record 109 home runs in 2021 … Helped Arkansas set a school record in fielding percentage with a .980 mark for the year.

Redshirt Junior (2020)
Started all 13 games he played at left field in his first season with the Hogs in 2020 … Hit leadoff each of the first five games and in eight total, moving to the middle of the order later in the season … Finished the year with a .340/.400/.452 line at the plate, tallying 17 hits, just one for extra bases, which was a homer in the second game of the season … Tallied six RBIs and 14 runs scored, tying for the team-lead in free passes with 10 walks, also the most on the team, and one HBP … Opened the year with hits in each of the first three games against Eastern Illinois (Feb. 14-16) … Posted five hits against the Panthers, with multi-hit performances in each of the last two games of the set … Hit a solo homer of the right field pole on Feb. 15 for his only extra-base hit of the year … Finished the series with five runs scored and a walk … Tallied two RBIs and a run scored on a pair of sacrifices against Gonzaga on Feb. 21 … Had one hit against the Bulldogs, coming in the finale, also scoring a run in the contest … Posted at least one hit in each of the last eight games of the year, with three multi-hit performances … Went 4-for-8 at the Shriners College Classic in Houston, driving in one run … Ended the trip to Minute Maid Park with a 3-for-4 showing against Baylor with an RBI on March 1 … After a hit, two walks and a run scored vs. Illinois State (March 3), posted another 4-for-8 series against South Alabama (March 6-8), complete with two RBIs, three runs scored, five walks, two stolen bases and a HBP … Walked twice in three-straight games (March 3-7) … Recorded two hits , an RBI and a run in the series opener vs. the Jags, followed by a two-run day and one hit in game two of the series … Played his last game in the first matchup with Grand Canyon (March 10), rolling out two hits, a walk and a run in the 6-1 win … Part of an offense that finished with a .310 average at the plate with 175 hits and 118 runs scored in 2020.

Prior to Arkansas
NJCAA First Team All-American at Grayson Community College … Hit .450 in 55 games with 91 hits, 49 for extras bases, including 25 doubles, six triples and 14 homers as a redshirt sophomore in 2019 … Ranked second among the JUCO ranks in doubles and seventh in hits … Notched 66 RBI and scored 83 runs for Grayson as a redshirt freshman in 2018 … Played in 11 games at Grayson CC during his freshman year in 2017 before earning a redshirt … Was a 2016 Perfect Game Preseason All-American – Texas Region Honorable Mention … Also earned 2015 PG Preseason Underclass All-American Honorable Mention honoree playing prep ball for the Dallas Patriots Stout.