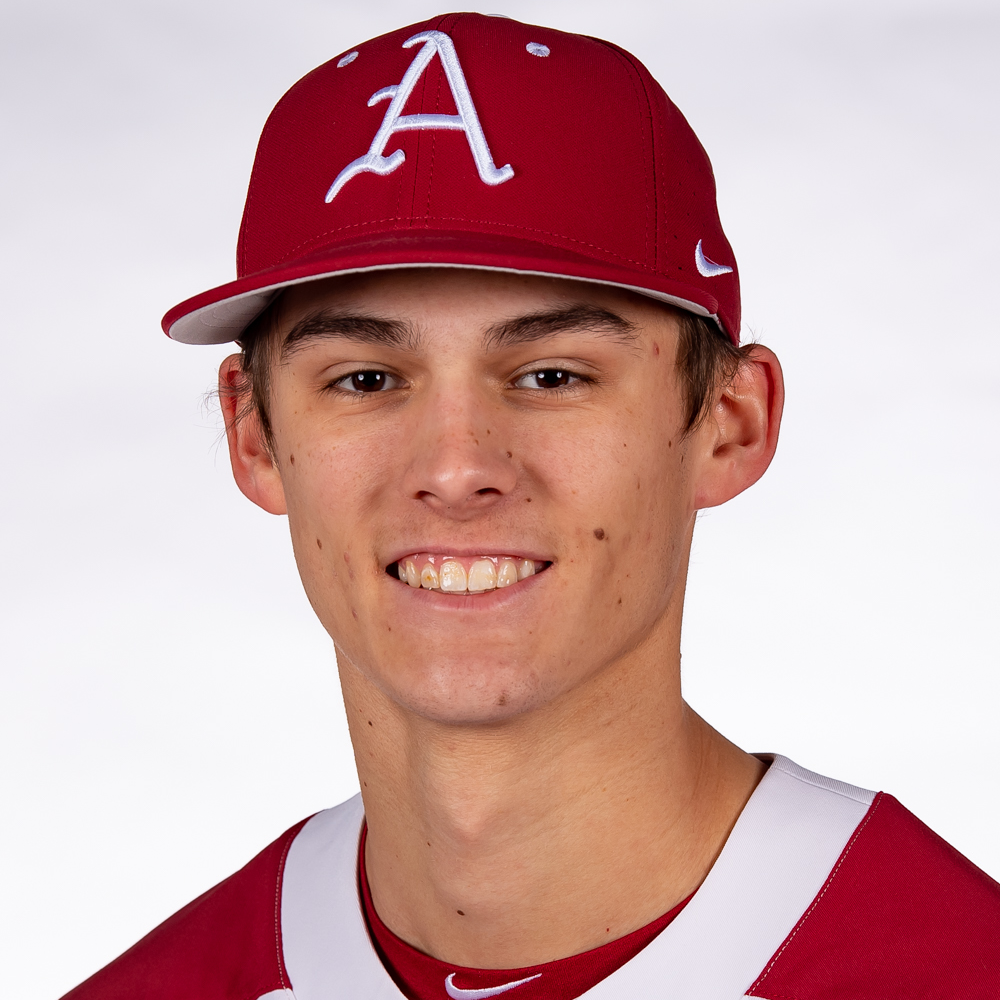 As a Sophomore (2020)
Made six appearances in relief for the Hogs in 2020 … Posted a 1-1 record with a 2.53 ERA, earning one save … Recorded 13 strikeouts over 10.2 innings … One of seven Hogs to strike out 10 or more batters in 2020 … Retired the first batter he faced four times he took the mound (six appearances), walking the other two … Allowed three runs on four hits, all singles, as opponents had a .118 batting average against him … Walked three and hit two batters … Only inherited one runner, but allowed him to score (GCU on March 10) … Pitched a career-high 2.0 innings against Eastern Illinois on Feb. 16 … Allowed one run on one hit and a walk, striking out one … Fourth game with a strikeout … Earned his first career win after tossing 2.0 shutout frames against Gonzaga on Feb. 20 … Second time to go 2.0 innings in relief … Matched a career-best three strikeouts … Fifth career appearance with no runs allowed … Appeared again against the Zags in Saturday’s 5-0 win, pitching a scoreless seventh inning … Allowed a walk but struck out two in the outing … Tossed 1.1 frames against Baylor in the Shriners College Classic on March 1 … Struck out three of the four batters he faced … Third time in his career with three strikeouts and second time this season … Charged with the loss against Illinois State on March 3, allowing two runs on one hit over 1.1 innings of work … First runs allowed in four appearances … Worked a career-high 3.0 innings against Grand Canyon on March 10, allowing just one hit, no walks, with three strikeouts … Earned his first save of his career for tossing the final three frames … Matched his career-best in strikeouts with three, third time this year to do so … Did not allow a walk for the third-straight game … Part of a pitching staff that finished with a 3.68 ERA and 143 strikeouts over 142.0 innings of work.

As a Freshman (2019)
Made six appearances, all in non-conference play … Threw 3.0 innings and allowed six runs on three hits with five strikeouts and five walks … Made first collegiate appearance vs. Memphis (Feb. 27), throwing one scoreless inning and striking out the side, which was also a season-high strikeouts … Saw the field against Stony Brook (March 2), Louisiana Tech (March 9), at Texas (March 20), Oral Roberts (April 9) and Northwestern State (April 24) … Threw a season-high 1.0 inning twice vs. Memphis and ORU.

Mt. Olive High School
Ranked the No. 364 player in the nation by Perfect Game and is the No. 3 ranked player in the state of Illinois by Prep Baseball Report … Named to 2016 and 2017 Perfect Game Preseason Underclassmen All-American Teams … Played in 2017 Perfect Game National Showcase … As a senior, struck out 57 over 26.2 innings with a 4.46 ERA over eight appearances … Had seven wins and 100 strikeouts in 66.1 innings over the last three seasons at Mt. Olive High School … Had his best season as a junior, compiling a 2.62 ERA with a career-high five wins and 66 strikeouts … Named Prairie State All-Conference in 2016 and 2017 … Plays under head coach Chris Monke at Mt. Olive High School.