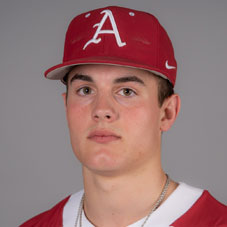 Owasso High School
Top 500 player in the nation by Perfect Game … Eighth-ranked player in the state of Oklahoma and No. 3 shortstop … 2017 Perfect Game Underclassmen All-American Honorable Mention … 2017 Oklahoma All-State honorable mention … Hit .393 as a junior with a team-leading 37 RBIs and six home runs … Finished second on the team in hits (42) and average … Had a two home run game against Collinsville and hit a solo shot in the Battle of the Bats win over Broken Arrow … Was a freshman starter at shortstop on the 2015 state championship team … Played for the Sandlot Sox Baseball Club during the summer … Played for coach Larry Turner at Owasso High School.