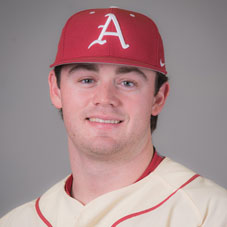 As a Senior (2017)
Made 24 appearances out of the bullpen … Produced a 3.66 ERA with a 4-3 record and two saves … Pitched 32 innings and gave up 13 earned runs with career-high 38 strikeouts … Earned victories against Rhode Island (March 10), Alcorn State (March 14), at Alabama (April 2), and at No. 10 Auburn (April 22) … In win over Auburn, Chadwick threw a career-high 4.1 innings without allowing a hit and striking out four … Had eight outings of two or more innings and three outings with four or more strikeouts (Miami (Ohio) – Feb. 17, Mississippi St. – March 18, at Auburn – April 22) … Made two appearances in SEC opening series against Mississippi State (March 17-18), pitching 3.2 innings with seven strikeouts … In game two against Bulldogs, Chadwick totaled a career-high five strikeouts, picking up his second consecutive save … Both saves for season came in sweep of Mississippi State and are his only saves of his career … Recorded 16 scoreless outings, nine against SEC opponents … Earned the win and scored the winning run against Alcorn State (March 14) after drawing a walk in the bottom of the ninth inning and scoring from second two batters later.

As a Junior (2016)
Made just eight appearances before suffering a season-ending injury … Produced a 1.76 ERA with a 1-0 record … Pitched 15.1 innings and gave up just three earned runs with 10 strikeouts … Strikeouts matched his total from 2015 … Lone victory came against No. 23 Texas Tech (Feb. 28) in 2.1 innings of work while tying a career-high with three strikeouts … Matched a career-high 3.0 innings pitched against Louisiana Tech (March 2) without allowing a run … Recorded scoreless outings against Central Michigan (Feb. 20), Mississippi Valley State (Feb. 24), La. Tech, ULM (April 12) and No. 2 Florida (April 15).

As a Sophomore (2015)
Made 12 appearances on the mound with one start during the 2015 season … Posted a 1-0 record and 7.04 earned run average in 15.1 innings of work … Earned the victory in the season-opener against North Dakota (Feb. 13), tallying a season-high three strikeouts in 1.1 innings … Worked a season-long 3.0 innings in his only start of the year against Gonzaga (March 11).