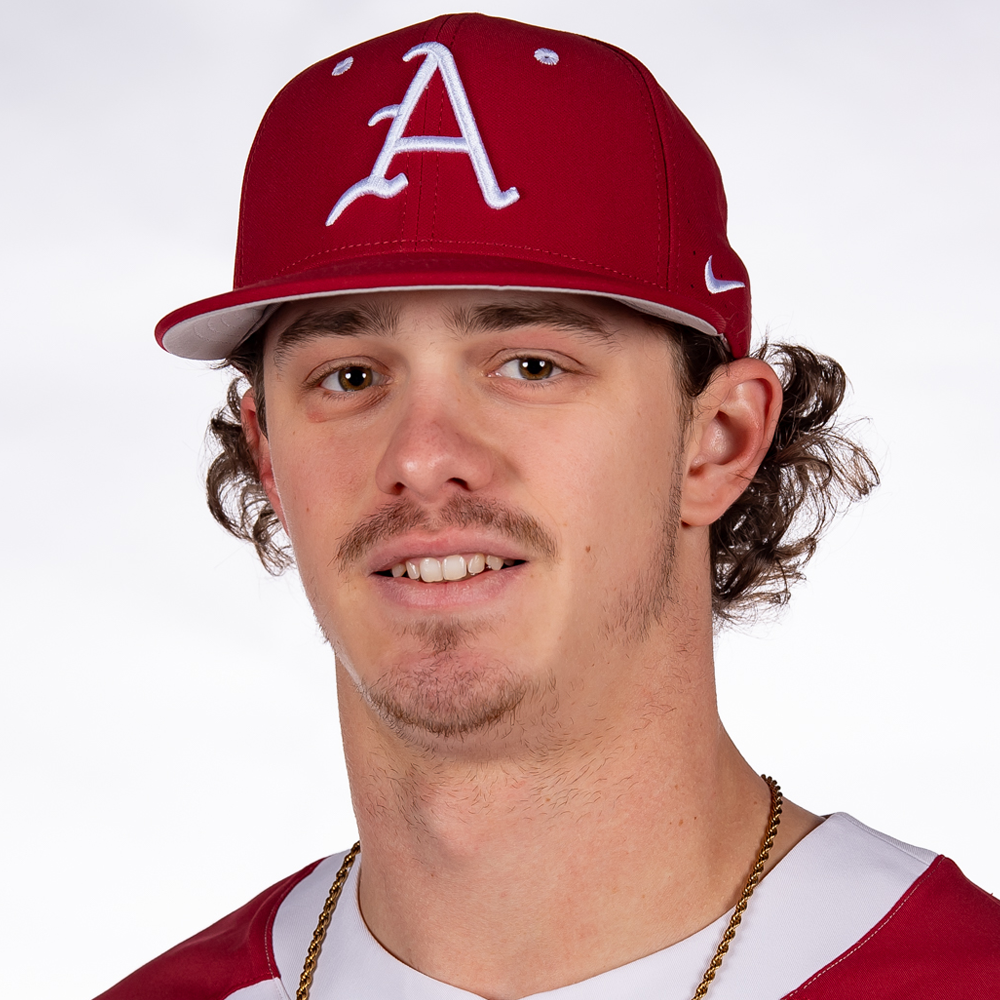 Entered the season as a consensus preseason All-America honoree, earning the distinction from five outlets, landing on the first team twice (Baseball America and NCBWA) … Rated as the No. 3 shortstop in D1 Baseball’s Preseason Position Power Rankings … USA Baseball Golden Spikes Award Preseason Watch List  … Preseason All-SEC First Team Shortstop (Coaches) … Started all 15 games he played in 2020 … Hit in the middle of the order, seeing nine starts as the cleanup hitter … Finished the season with a .271/.458/.386 line at the plate over 59 at-bats … Recorded 16 hits, seven for extra bases, with five doubles and two homers … Brought in 10 runs and scored seven, walking a team-high 10 times with one HBP … Also led the team in stolen bases, going 6-for-6 on the year … Opened the season with three hits against Eastern Illinois (Feb. 14-16), including a double … Was walked three times, all intentional, while scoring twice in the series … Reached in all three games, with a two-hit showing in the finale against the Panthers, both singles, also getting hit-by-a-pitch, stole a base and scored in the game … Had two hits vs. Gonzaga (Feb. 20-23), including a solo homer in the final game of the four-game set … Hit a single vs. Oklahoma on Feb. 28, finishing the Shriners College Classic in Houston with one hit over two games … Returned to the lineup against Illinois State after a game off to produce the team’s only four-hit performance of the season on March 3 … Posted a double and three singles in the contest, with three RBIs, a run scored and a stolen base … First four-hit game by a Hog since Trevor Ezell against TCU in the 2019 Fayetteville Regional … Recorded three hits against South Alabama (March 6-8), including a two-double game in the opener against the Jags … Finished the series with two RBIs, four walks and two stolen bases … Two of his three hits against Grand Canyon on March 11 also went for extra bases, putting him a triple shy of the cycle … Finished the game with four RBIs and two runs scored, lifting a three-run dinger into the home bullpen in left field in the first inning … One of 10 Hogs with a home run in 2020 … Part of an offense that finished with a .310 average at the plate with 175 hits and 118 runs scored in 2020.

Started all 66 games at shortstop … Hit .286 with 81 hits and career-highs in doubles (21), home runs (15) and RBIs (57) … Finished fourth on the team in slugging (.548) and third in stolen bases (10) … Also had 155 total bases throughout the year, which was third-highest in the SEC and ranked 15th in the country … His 21 doubles were seventh-highest in the SEC and 31st in the nation … The home run total was fourth-highest in the league … Had four triples, tying for second in the SEC with teammate Jack Kenley … Finished tied for the team lead with 26 multi-hit games and second in multi-hit games (16) … Seven of those multi-hit games were of three hits or more and seven of the multi-RBI games were of three RBIs or more … Hit .295 in conference play, fourth-highest average on the team with 38 hits, 28 runs scored, a team-leading nine home runs and 22 RBIs … Already has compiled 28 home runs in his career, which is five off the Arkansas all-time top-10 … Had seven hits in the NCAA Tournament, four in the NCAA Fayetteville Super Regional against Ole Miss … Three of the four hits were singles, the other being a double in the second game of the series (June 9) … Went a combined 4-for-9 (.444) in the super regional with three RBIs to help Arkansas to its 10th College World Series appearance … Was named the SEC Player of the Week on April 22, his third SEC weekly honor of his career … Hit .471 during the award-winning week in a midweek win over Arkansas-Pine Bluff and series sweep over No. 2 Mississippi State … Five of his eight hits and six of his 10 RBIs come against the Bulldogs to help Arkansas to its second SEC series sweep and second sweep over Mississippi State in the last three years … Also totaled a career-high four RBIs twice during the week, once coming in the 16-4 win over Arkansas-Pine Bluff (April 16) and the other in a 12-5 series-clinching victory over MSU (April 20) … Topped the career-high RBI total with five driven in a 2-for-5 game against Tennessee (April 27), three off the home run … Had a career-high four hits in a game twice, coming against Oral Roberts (April 9) and No. 15 LSU (May 9) … Notched his first career two-home run game at No. 17 Texas A&M (May 16), one being a lead-off home run in the 7-3 victory … Finished the year with three inside-the-park home runs (vs. La. Tech – March 9; vs. Grambling – April 30; vs. Kentucky – May 3) … Had his best postseason round in the NCAA Super Regionals against Ole Miss, hitting .308 (4-for-13 with one double, five runs scored and three RBIs … Had two hits each in games one and two against the Rebels, including a two-RBI performance in the Game 1 win.

Played in 67 games with 62 starts, primarily at third base … Hit a team-leading .345 with 87 hits, 14 doubles, 13 home runs and 49 RBIs … Also led all Razorbacks with a .556 slugging percentage and was fourth with a .418 on-base percentage … His 87 hits tied with teammate Heston Kjerstad for second-most on the team and setting an Arkansas freshman single-season record … His 14 home runs also broke the previous Arkansas freshman single-season record, but were only two less than Kjerstad … Stole a team-leading eight bases … Had the third-best average on the team in SEC play (.333) and highest among freshmen … Led all Razorbacks in the NCAA Tournament with a .352 average, including .357 in the College World Series … Had 19 hits over 12 games in the NCAA Tournament, including five doubles and 12 runs scored … Totaled 10 of his 19 tournament hits just in the CWS … Led all Razorbacks with 29 multi-hit games and was fourth on the team in multi-RBI games (12) … Had six games with three hits or more and three games with four or more … His four-hit games came against Bucknell (Feb. 17), at Georgia (May 17) and vs. Florida (June 22) in the College World Series … Made his first career appearance on Opening Day against Bucknell (Feb. 16) and first career start the next day at third base … Notched a five-RBI game in his second appearance of the season, going 4-for-6 with a home run, a double and three runs scored … Had a season-high six-RBI day against Dayton (Feb. 28) with a season-high two home runs … Was named SEC Freshman of the Week after series against Dayton (Feb. 28-March 1) and USC (March 2-4), hitting .444 over the five-game stretch with seven RBIs and eight hits … Strung together a 13-game hitting streak from Feb. 28 against Dayton to March 17 against Kentucky … Hit an even .400 during that streak with 20 hits, three doubles, six home runs and 17 RBIs … Earned SEC All-Tournament honors after going 4-for-12 (.333) with three home runs, helping Arkansas reach the semifinals … Notched his second two home run game of the season in the SEC Tournament quarterfinals against South Carolina (May 23), part of a three-RBI day … Led Arkansas with six hits and five runs scored in the NCAA Super Regional against South Carolina (June 9-11) … Began the CWS with eight hits in his first 14 at-bats (.571), including a 4-for-5 day against Florida in the CWS Semifinals … Was one of only two players (Dominic Fletcher) to record a four-hit game in the 2018 CWS … Finished the CWS with the fourth-most hits (10) of any player in the field and fifth-highest batting average among players with 10 or more at-bats.

Lonoke High School
2018 Arkansas Gatorade Player of the Year … Ranked No. 270 in the nation by Perfect Game and No. 3 overall in the state of Arkansas … Batted .508 as a junior for Lonoke High School with 25 runs scored, 18 extra base hits and 30 RBIs … Also stole 11 bases and compiled a 0.70 ERA on the mound with 18 strikeouts in 10.0 innings pitched … Named First Team All-State by Arkansas Prep Baseball Report in 2016 … Was also named to the Arkansas Democrat-Gazette All-Arkansas Baseball First Team … Named to 4A All-State and All-Tournament Teams as a junior … Played for Darrick Lowery at Lonoke High School.