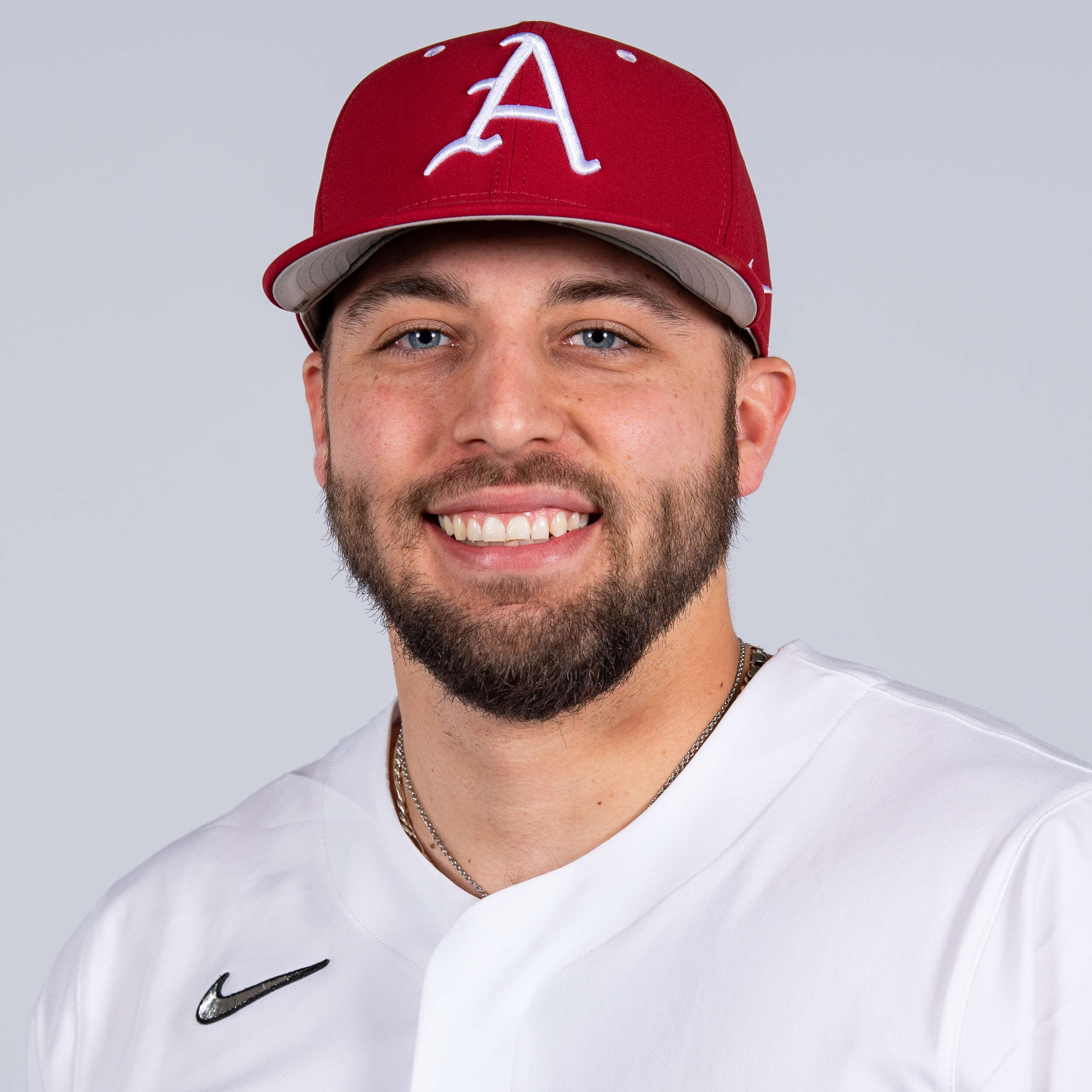 Team captain … Played in 55 games with 54 starts (53 at catcher, 1 at first base), slashing .257/.367/.346 with two home runs and 18 runs batted in … Scored 35 runs on the year … Recorded 49 hits, including two doubles and one triple … Drew 32 walks and was hit by two pitches … Totaled 66 bases … Posted 11 multi-hit games, including two three-hit efforts, and five multi-RBI games … Season-long hitting streak of 11 games and reached base streak of 11 games … Perfect 6-of-6 in stolen base attempts … Registered a .990 fielding percentage, committing only six errors in 593 chances … Threw out 11-of-32 base stealers (34.3%) … Drew a season-high three walks and scored three runs in the season opener against No. 3 Texas Tech (Feb. 20) in the State Farm College Baseball Showdown at Globe Life Field in Arlington, Texas … Picked up two hits, including his lone triple of the season, and two RBI against Murray State (March 5) … Three hits, including his first home run of the season, two RBI and three runs scored against No. 22 Alabama (March 20), earning him SEC Co-Player of the Week honors … Notched his second three-hit game of the year against No. 9 Florida (May 20), driving in two runs in the Razorbacks’ 6-1 win … Collected two hits, two RBI and a run scored with a walk and stolen base against No. 16 NC State (June 11) in the NCAA Fayetteville Super Regional … Before the season, earned preseason first-team All-SEC recognition from the league’s coaches.

Junior (2020)
Entered the 2020 season as a Baseball America Third Team Preseason All-American … Rated as the “Best Catcher Arm” by Major League Baseball scouts (BA) … Ranked fifth at catcher in D1 Baseball’s Preseason Position Power Rankings … Buster Posey National Collegiate Catcher of the Year Watch List … Preseason All-SEC First Team (Coaches) … Played in all 16 games, starting 14 at catcher, entering the other two as a defensive replacement during the 2020 season … Hit fifth-through-eighth in the order as a junior, seeing five starts in the seven-hole … Finished the season with a .302/.509/.361 slash line at the plate over 53 at-bats … Tallied 16 hits, eight for extra bases, with six doubles, a triple and a homer … One of two Hogs with a triple in 2020 … Scored 10 runs, drove in 11 and walked six times … Threw out six-of-10 base stealers … Reached base safely in each of the first five games … Had two hits in the opening series against Eastern Illinois (Feb. 14-16), including a double, two RBIs, a run scored and a team-high four walks … Brought in two runs on a double, scoring once while drawing two walks in the finale against the Panthers … Punched out the one EIU runner attempting to steal … Hit .429 against Gonzaga on Feb. 20-23 with a .929 slugging percentage after four of his six hits when for extra bases … Opened the series with a two-hit, two-RBI showing, also scoring a run in the contest after hitting a double … Followed it up by coming a double shy of the cycle on Feb. 21, with a single in the fifth, a triple off the top of the right-center field wall in the sixth and a homer in the seventh … First Razorback in 2020 to come a hit away from the cycle … Recorded an RBI double in the finale against the Bulldogs … Tallied three hits at the Shriners College Classic (Feb. 28-March 1), including a multi-hit performance against Texas on Feb. 29 … All three hits in Houston were doubles … Produced a three-hit game against South Alabama on March 8, scoring twice with one RBI … Had two RBIs in the series opener on March 7 behind a sacrifice fly and an RBI groundout … Notched a knock in both games against Grand Canyon (March 10-11), driving in a run in the first game of the series, while scoring and walking in both contests … Part of an offense that finished with a .310 average at the plate with 175 hits and 118 runs scored in 2020 … Before the season, named to the Buster Posey National Collegiate Catcher of the Year watch list.

Sophomore (2019)
Was the Razorbacks’ primary catcher, playing in 58 games, starting 50, and hitting a career-high .243 with 31 runs scored, 43 hits, three home runs and 33 RBIs, all career bests … Also walked 38 times and stole seven bases … Had a .379 on-base percentage, the sixth highest on the team … Totaled 22 caught stolen bases, which was the most in the SEC and a career-high … It was the most caught stolen bases by a Razorback catcher in the last three seasons … Also had 14 caught stolen bases in SEC play … Hit slightly better in conference play, going .265 at the plate with 15 RBIs and 17 walks … Had six hits in the NCAA Tournament, four coming in the NCAA Super Regional vs. Ole Miss … Finished with the second-highest average (.444) on the team in the super regional and slugged .778 with a team-high tying five RBIs … Went a perfect 3-for-3 in the deciding game of the NCAA Super Regional against Ole Miss (June 10), including a career-high four RBIs and his third home run of the year … Finished with two of Arkansas’ walk-off hits (vs. Missouri – March 17; vs. No. 18 Tennessee – April 28) and also had the go-ahead hit on the road at No. 6 Vanderbilt (April 14) … Also finished with six multi-hit games, four of three hits or more, and seven multi-RBI games … Games of three hits or more include: 4 at Vanderbilt (April 14), 3 vs. Mississippi St. (April 19), 3 at Kentucky (May 3), 3 vs. Ole Miss in NCAA Super Regional June 10 … His four hits against Vanderbilt were a career-high and included the go-ahead ninth-inning hit that helped Arkansas complete a two-run comeback in the final frame to avoid a sweep … Tallied a career-high three walks in a 9-2 victory over Charlotte (March 6).

Freshman (2018)
Appeared in 19 games, starting seven … Compiled a .222 batting average with six hits in 27 at-bats … Two of his hits went for doubles and he had five RBIs … Also walked three times and had two sacrifice flies … Appeared in six conference games with two starts (at Mississippi State – April 21; at Georgia – May 17) … Totaled two multi-hit games (at San Diego – Feb. 25; vs. Dayton – Mach 1) and had a double and an RBI in both games … Also tallied RBIs against ULM (April 3), at Mississippi State (April 21) and against Texas A&M (May 13) … Appeared in two NCAA Fayetteville Regional games (vs. Oral Roberts – June 1; vs. Southern Miss – June 2), both as a defensive replacement … Caught seven would-be base stealers, two less than everyday catcher Grant Koch.

High School
Played for head coach Scott Hormann for Heritage HS … Ranked the No. 3 player in the state of Colorado and the top catcher overall by Perfect Game … Combined to hit .313 in his first two years of high school with 27 runs scored, 10 extra-base hits and 32 RBIs … Upped all of those totals as a junior in 2016, hitting .424 with 23 runs, seven extra-base hits and 11 RBIs in 21 games … Threw out eight base runners in 11 stolen base attempts … Named First Team All-Continental League as a sophomore and junior … Attended the 2016 Perfect Game Rocky Mountain Showcase … Plays summer ball with the Midland Redskins, which made the AABC Connie Mack World Series.