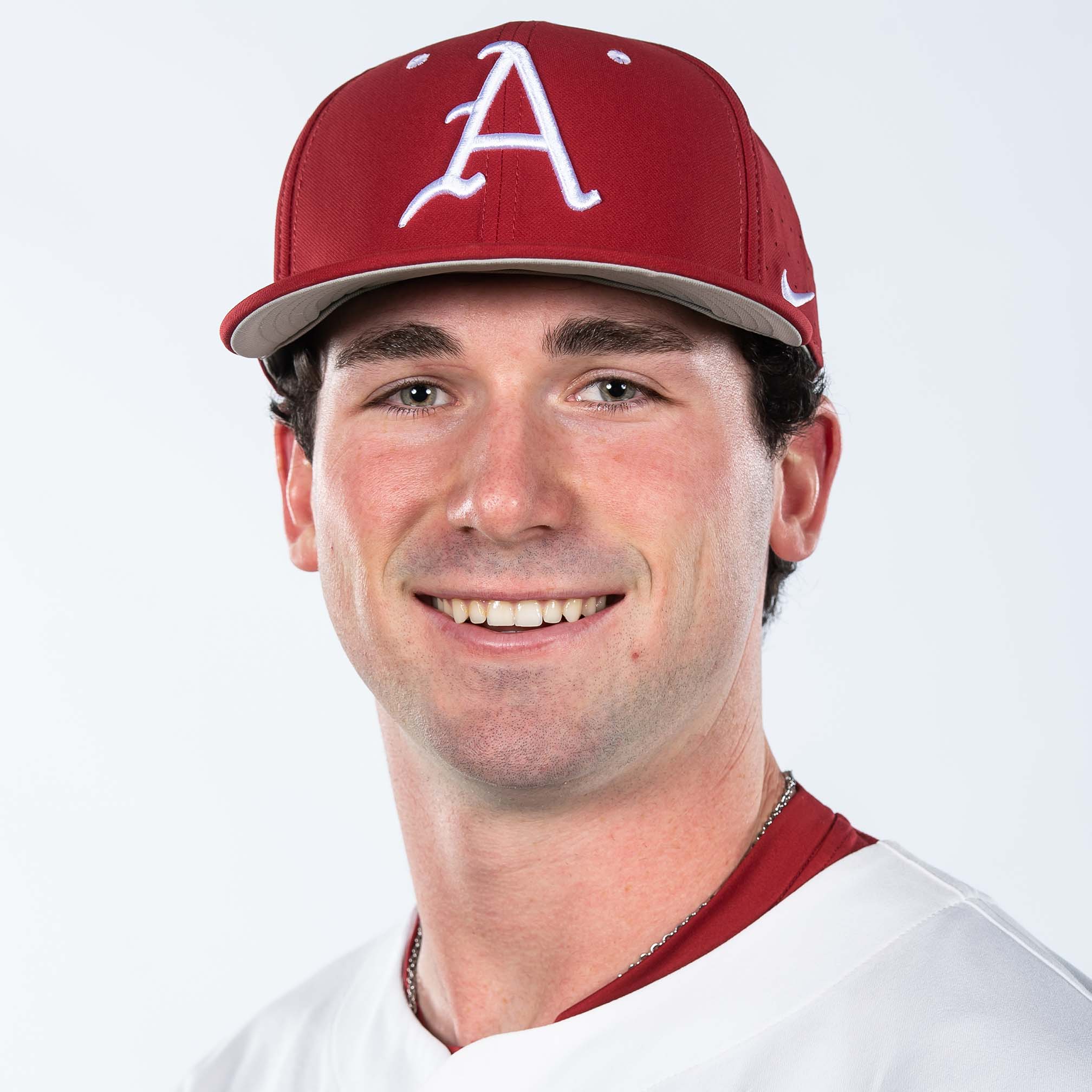 Team captain … Only Razorback player to start all 67 games (all 67 at third base), slashing .298/.387/.553 with a team-leading 16 home runs and a team-best 60 runs batted in … Scored a team-leading 62 runs … Recorded 82 base hits, including a team-high 20 doubles and one triple … Drew 38 walks and was intentionally walked a team-high six times … Plunked by five pitches … Tallied a team-leading 152 total bases … Stole a team-leading 12 bases in 13 attempts … Led Arkansas in nine offensive categories: slugging percentage (.553), runs scored (62), runs batted in (60), doubles (20), home runs (16), total bases (152), stolen bases (12), total plate appearances (323), at-bats (275) … Also led the Razorbacks in multiple RBI games with 16, including six three-RBI performances, three four-RBI efforts and one six-RBI game … Had 21 multi-hit games, tied with C Michael Turner for second most on the team … Posted a season-long hitting streak of 12 games, tied with OF Chris Lanzilli and C Michael Turner for longest on the team … 22-game reached base streak was tied for third longest on the Hogs … Led all SEC hitters in plate appearances (323) and at-bats (275) … Tied for third among SEC hitters in doubles (20) and ranked seventh in total bases (152) … Defensively, committed 11 errors in 150 total chances (.927 fielding percentage) … Helped turn 10 double plays … In SEC play, slashed a team-leading .310/.373/.543 with six homers and a team-high 24 RBI … Had 40 hits, including 12 doubles, against SEC opponents, most among all Arkansas hitters … Collected a season-best four hits, including two doubles, with two runs scored, an RBI and a stolen base vs. Indiana (Feb. 25) in the Karbach Round Rock Classic at Dell Diamond in Round Rock, Texas, helping him earn a spot on the All-Tournament Team … Swatted his first home run of the season as part of a three-hit day in game one of a doubleheader against UIC (March 10), driving in three runs and scoring three runs in the ballgame … Clobbered a grand slam against UIC (March 12) … Tallied a season-high six runs batted in against UIC (March 13), four of which came on his second grand slam in as many days … Earn SEC Co-Player of the Week honors following the UIC series, finishing the four-game set with a .333/.350/.833 slash line, three homers and a team-leading 13 RBI … Drew a season-high three walks against Grambling (March 16) … Drove in four runs on two hits, including a double, against Mississippi State (April 2) … Matched his season high with three walks against Mississippi State (April 3) … Swiped a season-best two bases against UCA (April 5) … Homered twice and drove in four runs against No. 24 Vanderbilt (May 14) … In the NCAA Tournament, slashed .313/.393/.688 with a team-leading five homers and 12 runs batted in … Named to the NCAA Stillwater Regional All-Tournament Team after posting a .353/.500/1.059 slash line with a team-best four homers and eight RBI … Clobbered two home runs and totaled three RBI vs. Grand Canyon (June 3) … Had a home run with two runs batted in and a pair of walks at No. 6 Oklahoma State (June 4) … Homered for the fourth consecutive game at No. 6 Oklahoma State (June 5), collecting three RBI on three hits … In the College World Series, slashed .292/.320/.542 with a home run and three runs batted in … Hit a homer and drove in three runs vs. No. 2 Stanford (June 18) … Entered the campaign as a preseason All-SEC selection by the league’s coaches … Earned a spot on the preseason watch list for the USA Baseball Golden Spikes Award … Helped Arkansas set a new school record in fielding percentage with a .982 mark for the year.

Became the 24th Razorback in program history to earn Freshman All-America status … Started and played in 60 games (48 in right field, seven at third base, four in left field, one as designated hitter), slashing .279/.369/.500 with 14 homers and 44 runs batted in … Scored 52 runs … Racked up a team-leading 67 hits, including 11 doubles, while taking 29 walks (one IBB) … Plunked by seven pitches … Totaled 120 bases on the year … 17 multi-hit games, including a team-leading seven three-hit performances … 12 multi-RBI games, tying INF Cullen Smith with a team-best three three-RBI efforts … Recorded a season-long hitting streak of 11 games and team-leading reached base streak of 24 consecutive games … Played errorless defense, recording 90 putouts and 10 assists with a perfect fielding percentage (1.000) … Finished the season as one of two Razorback defenders, along with OF Christian Franklin, to post an unblemished fielding percentage in 100-plus chances … Made his collegiate debut in the season opener against No. 3 Texas Tech (Feb. 20) in the State Farm College Baseball Showdown at Globe Life Field in Arlington, Texas, picking up his first base hit with two runs scored and a walk … Launched his first collegiate home run against SEMO (Feb. 26), driving in the first two runs of his career … Recorded his first three-hit game on the road at Louisiana Tech (March 13), homering and driving in two runs in the contest … Delivered a three-hit, three-RBI day against Memphis (March 23) … Swatted a home run at No. 3 Ole Miss (April 11), driving in three runs in Arkansas’ series-clinching win to earn SEC Co-Freshman of the Week honors … Provided a pair two-RBI efforts in the three-game series against Texas A&M (April 17-18), collecting SEC Co-Freshman of the Week honors for the second time … Carded his first four-RBI game against Arkansas State (May 11), hitting the first grand slam of his collegiate career … First multi-homer effort came against No. 9 Florida (May 20), driving in four runs on three hits to garner SEC Freshman of the Week recognition for the third time in 2021 … Hit a three-run homer against NJIT (June 4) in the NCAA Fayetteville Regional … Two hits, including a solo home run, against No. 16 NC State (June 13) in game three of the NCAA Fayetteville Super Regional … Tied OF Heston Kjerstad for the Arkansas freshman record for home runs in a season with 14 … Part of a Razorback offense that hit a school-record 109 home runs in 2021 … Helped Arkansas set a school record in fielding percentage with a .980 mark for the year.

High School
Played for head coach Larry Flake at Greenbrier High School in Greenbrier, Ark. … Top prospect in Arkansas according to Perfect Game and No. 25 player in the nation … 2019 Perfect Game All-American and Under Armor All-American … Played in the 2019 PG National Showcase and the 2017 and 2018 Junior National Showcase … Hit .343 over the summer with the Arkansas Prospects travel team, helping them to a fifth-place finish at the PG WWBA National Championship that involved 372 teams … Finished second at the 2019 Perfect Game All-American Classic Home Run Derby … Named First Team All-Arkansas Preps in 2019 … Hit .514 as a junior at Greenbrier with 22 RBIs, 38 hits, including six home runs … Was named the Arkansas Democrat-Gazette River Valley and Ozark Edition Player of the Year … Helped Greenbrier to back-to-back state semifinals appearances in 2017 and 2018 … Named 2019 5A All-State player as a junior.