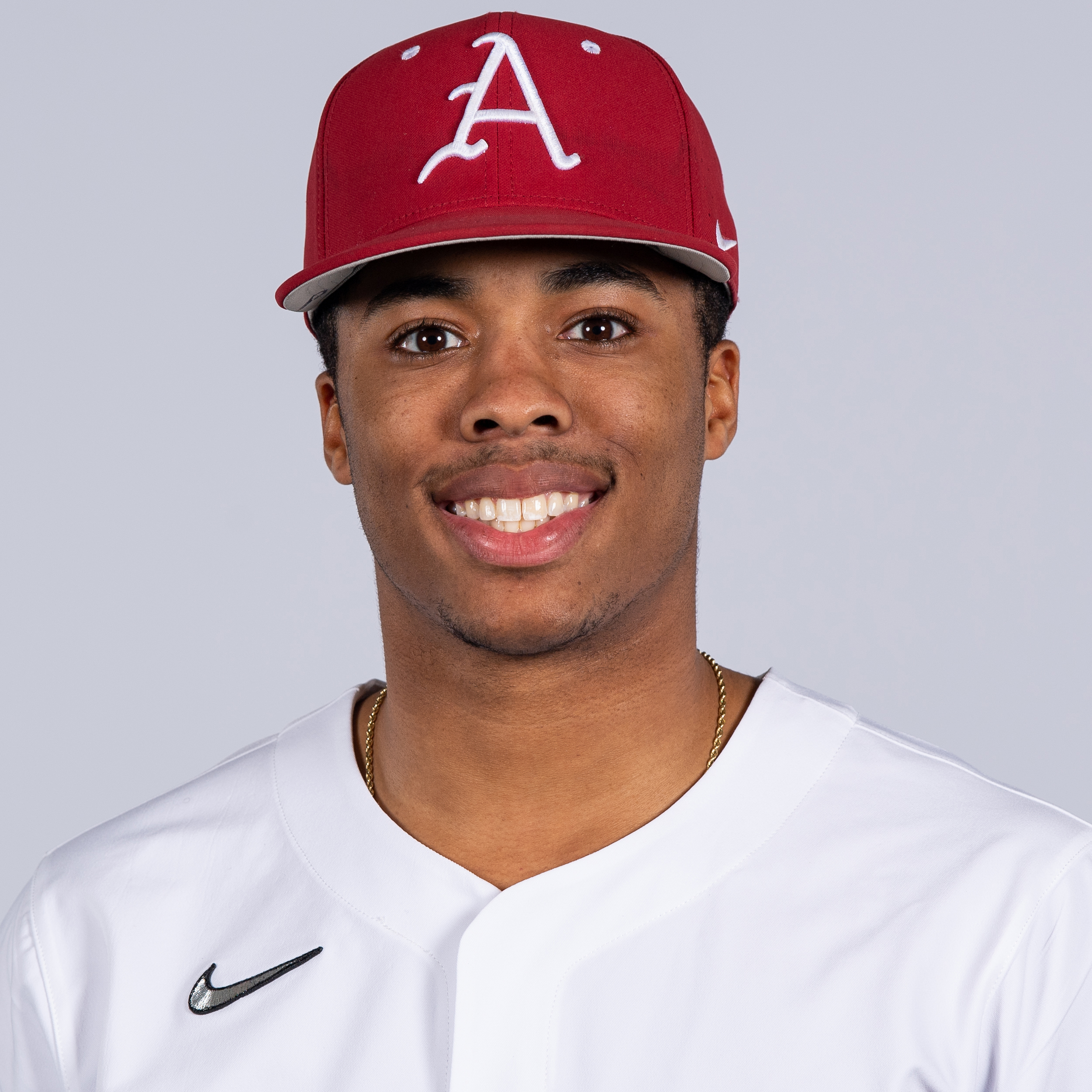 Played in 61 games with 60 starts (all 60 in center field), slashing .274/420/.544 with 13 home runs and 54 runs batted in … Scored 55 runs … Racked up 59 hits, including 15 doubles and two triples, on the year … Drew 44 walks and was hit by a team-high 12 pitches … Totaled 117 bases, one of five Razorbacks to eclipse the century mark during the season … Tied with INF Robert Moore and INF/OF Brady Slavens for team lead in multi-hit games with 18 … 12 multi-RBI games during the year … Recorded a season-long five-game hitting streak … Reached base in a season-long 17 consecutive games … Led the Razorbacks in stolen bases, swiping 11 bags in 14 attempts … Played errorless defense during the year, recording 124 putouts and four assists with two double plays turned in 128 chances … Finished the season as one of two Razorback defenders, along with INF/OF Cayden Wallace, to post a perfect 1.000 fielding percentage in 100-plus chances … Picked up his lone triple of the season against #10 TCU (Feb. 22) in the State Farm College Baseball Showdown at Globe Life Field in Arlington, Texas … Hit a home run in three consecutive games against SEMO (Feb. 25-27) … Racked up a season-high four hits, including a home run, three RBI and two stolen bases against the Redbirds (Feb. 27) … Drove in four runs on three hits against Murray State (March 6) … Hit two solo home runs in the series opener at No. 2 Mississippi State (March 26) before tallying three more RBI on two hits, including a three-run blast, the following day (March 27) … Had a career day against against UAPB (April 13), driving in a career-high six runs on three hits … Racked up 10 RBI with a homer and two doubles during the series at LSU (April 30-May 1) to earn SEC Player of the Week recognition … Landed on the NCAA Fayetteville Regional All-Tournament Team, powered by a three-hit effort against NJIT (June 4) … Finished the season as one of six outfield finalists for the ABCA/Rawlings Gold Glove Award … Named one of 42 semifinalists, including one of three Razorbacks, along with INF/OF Brady Slavens and RHP Kevin Kopps, for the Dick Howser Trophy, given to the top player in collegiate baseball … Before the season, named a consensus preseason All-American by D1Baseball, Perfect Game, NCBWA and Baseball America … Earned preseason first-team All-SEC honors from the league’s coaches … Landed on the Golden Spikes Award preseason watch list … Part of a Razorback offense that hit a school-record 109 home runs in 2021 … Helped Arkansas set a school record in fielding percentage with a .980 mark for the year.

Sophomore (2020)
Entered the season rated as the No. 26 outfielder in D1 Baseball’s Preseason Position Power Rankings … Started all 16 games at center field in 2020 … Hit in the middle of the order at the beginning of the year before moving to the leadoff spot for the final four games of the season … One of Arkansas’ most consistent hitters in 2020, finishing the year with a .381/.619/.467 line at the plate over 63 at-bats, the second-most on the team … Recorded 24 hits, eight for extra bases with four doubles, a triple and three homers … One of 10 Hogs with a home run and hit the first by a Razorback in 2020 in the season opener … Scored a team-high 21 runs and drove in 11, also tying for the team-lead in free passes with 11, including 10 walks … Went 3-for-4 in stolen base opportunities … Finished second on the team in batting average (.381), hits (24), homers (3), slugging percentage (.619), on-base percentage (.467) and stolen bases (3) … Had a hit in 14 of 16 games, reaching base in every game but one … Put together seven multi-hit performances, three games with three hits, and two multi-RBI showings … Put together a five-hit performance in the opening series against Eastern Illinois on Feb. 14-16 … Hit the first homer by a Razorback in the first game of the year, a two-run shot over the home bullpen in left field with two outs in the fifth inning … Recorded an RBI single and scored twice in the second game of the year against EIU on Feb. 15 … Racked up three hits, including a double with two runs in the finale against the Panthers … Posted another solid weekend against Gonzaga (Feb. 20-23), throwing down six hits, three for extra bases with two doubles and a homer, as well as four RBIs and six runs scored … Posted an RBI single in the opener, also scoring a run and walking … Walked in each of the first four games of the year … Added two hit showings in the second and fourth games of the set vs. the Bulldogs, with two RBIs on Feb. 21 … Scored twice in each of the last two games of the series … Launched his second homer of the year against the Zags on Feb. 23, a solo home run in the fourth inning to give the Hogs a 3-0 lead … Scored at least once in the first seven games of 2020 … Tallied two hits at the Shriners College Classic in Houston on Feb. 28-March 1, with one against Oklahoma and Texas in the first two games of the weekend … Posted an RBI double against Texas on Feb. 29, scoring twice in the game … The contest against Baylor on March 1 was the first and only game of 2020 to not reach base safely … Recorded multi-hit performances in each of the next four games, bookended by a pair of three-hit games against Illinois State and in the South Alabama finale … Scored twice and drove in a run against the Redbirds on March 3 … Racked up a team-best seven hits against the Jags on March 6-8, for a .538/.923/.600 line at the plate over 13 at-bats … Recorded two RBIs, two walks and scored five times in the series … Had two hits, a walk and a run scored in each of the first two games against South Alabama, including an RBI in the middle game of the set … Concluded the series with a three-hit, three-run game, coming a double shy of the cycle thanks to a triple in the first, a homer in the third, and a single in the ninth, the latter continuing the inning to set up a Heston Kjerstad walk-off home run … Walked in the first game against Grand Canyon (March 10) and hit a single & scored a run in the second game on March 11 … Part of an offense that finished with a .310 average at the plate with 175 hits and 118 runs scored in 2020.

Played in 64 games, starting 58 as Arkansas’ primary left fielder … Hit .274 with 55 hits, eight doubles, one triple, six home runs and 34 RBIs … His average was highest among all Razorback freshmen and hit total was seventh-most on the team … Also walked 24 times for a .361 on-base percentage … Stole 12 bases, second-most on the team, and two in SEC play … Hit .262 in SEC play, while playing in all 30 league games … Seven of his 28 conference hits went for extra bases (4 doubles, 3 home runs) … Also had 12 RBIs against SEC opponents … Had six hits in the NCAA Tournament (.250), two in the NCAA Regional and a team-best four hits in the College World Series … Led all Razorback hitters in Omaha, hitting .571 (4-for-7) with one double and one run scored … Finished the season with 17 multi-hit games, seventh-most on the team and four games with three or more hits … Eight of his multi-hit games came in conference play … Also finished with nine multi-RBI games, six with three or more RBIs … Began his Arkansas career going 16-for-42 (.381) in his first 14 games, with 16 RBIs, three doubles, two home runs and 11 runs scored … Made his first collegiate appearance and start on Opening Day against Eastern Illinois (Feb. 16), going 2-for-5 (.400) with two-run scored and three RBIs … Also hit a home run on Opening Day and had a stolen base … Went a perfect 4-for-4 in game 2 against No. 18 Tennessee (April 27), a season-high, his only four-hit game this year and was the only freshman on the team to have a four-hit game during the season … Had a season-high four RBIs against No. 9 Texas on the road, all four coming on a grand slam in an 11-4 Arkansas victory … Stole a season-high two bases twice against USC (Feb. 22) and Central Connecticut (May 31) in the NCAA Regional … In that game against CCSU, he went 2-for-3 at the plate with one RBI and one walk … Had multi-hit performances in both games at the College World Series, earning a double against Florida State (June 15) and a stolen base against Texas Tech (June 17).