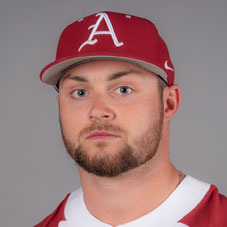 As a Redshirt Sophomore (2018)
Made 16 appearances after coming back from Tommy John surgery … Pitched 15.2 innings and compiled a 4.60 ERA with eight earned runs allowed and 18 strikeouts … Gave up only three extra-base hits and held opponents to a .211 batting average … Six of his appearances came in SEC play, throwing 4.2 innings and striking out six … Made four appearances in the NCAA Tournament and two in the College World Series (vs. Texas – June 17; vs. Oregon State – June 28) … Threw two innings or more twice (vs. ULM – April 4; vs. South Carolina – June 10), not allowing a run both times and allowing only one hit and three walks … Struck out two or more batters five times, including once in the NCAA Fayetteville Super Regional against South Carolina (June 10) … Allowed more than one earned run in an appearance one time (at Georgia – May 18) … Never allowed more than two hits in an outing.

As a Sophomore (2017)
Made three appearances before suffering a season-ending injury needing Tommy John surgery … Pitched 2.1 innings and gave up just one earned run with one strikeout and one walk … Pitched one inning and tallied his lone strikeout against Miami (Ohio) (Feb. 18) … Suffered his injury at Louisiana Tech (March 1) after throwing 1.1 innings and allowing just one hit.

As a Freshman (2016)
Played in 28 games and made 16 starts … His 16 starts came at third base, shortstop and second base … Also pitched in four games, totaling 3.1 innings, two earned runs and no extra base hits … Batted .204 with 10 hits, six RBI and six walks … Stole four bases … Eight of his 10 hits and four of six RBI came in SEC play … Made first collegiate start against Mississippi Valley State (Feb. 24), going 2-for-3 with two RBI and two walks … Became primary third baseman on April 19 when Carson Shaddy was moved to the outfield.

Bentonville High School
Played for head coach Todd Abbott … Named a top 215 shortstop in the country, the No. 10 recruit in the state of Arkansas and the top shortstop in the state according to Perfect Game … Named to the USA Today All-Arkansas team … Played summer ball for the Arkansas Express and was selected to the Midwest USA Baseball team … Hit .380 in 2014 with six doubles, one triple and 18 stolen bases … Most memorable athletic moment was getting MVP of state football.

Personal
Born on May 17, 1996 … Son of Jamie and Kerrie Scroggins … Has one brother, Christopher … Christopher plays baseball for Texas Southern … Business major.